Even though Halloween is past, that doesn’t mean we’re done with our spooky figure reviews! I’ve got one more of Diamond Select’s Universal Monsters toys to finish up my look at their 2010 assortment. I’m ending on The Wolf Man, one of my favorite characters and a nice conclusion to the first wave of figures.

In the original Wolfman, upon hearing of his brother’s death, Larry Talbot returns to his family home in Wales to reconcile with his father. That night, while he and local love interest Gwen Conliffe are taking a stroll, he hears cries of terror coming from the woods. Running to the rescue, Larry is able to fend off a large wolf just as it is about to attack a girl. Larry beats the feral animal to death with his silver headed cane, but not before being bitten. With the curse of the werewolf running through his veins, Larry struggles to maintain his humanity or die trying. 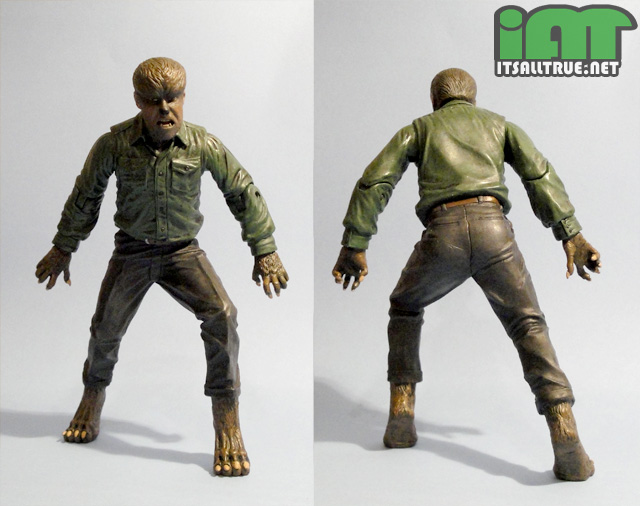 Larry Talbot is by far my favorite character in all the Universal Monsters mythologies. He’s not a mad scientist, a reanimated corpse, or even a creature from undiscovered lands. Larry Talbot’s just an ordinary guy who tries to save a girl and ends up being turned into a monster. Not only is the wolf in him a violent and chaotic force, but it seems to have an instinctual need to seek out those he truly cares for and destroy them. Throughout his many appearances Larry searches for a cure to his condition, but is never successful. Not even death allows him peace, as the curse seems to resurrect him time and again. 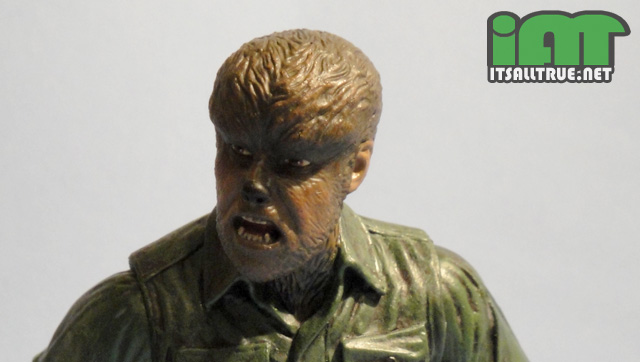 There was no doubt in my mind I’d be buying this figure. What surprised me was that he was never solicited by Diamond like the Mummy and Creature were. Instead, the regular figure of The Wolf Man is a Toys R Us exclusive that came out with their version of the Mummy and Creature. I don’t mind this since it saved me a little money, but I was a bit disappointed that there was no large display base or maybe a figure of Gwen Conliffe to display him with. 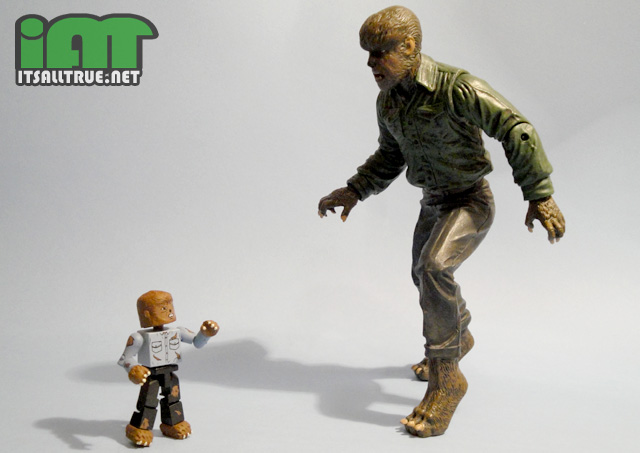 What you do get is a very good looking figure though. The Wolf Man is sculpted in a hunched over stalking pose that fits the character very nicely. Larry’s head is sculpted nearly perfectly with the dog like nose and poofy forehead of hair. I found it interesting that they chose to portray him with an open mouth. Usually you just see bared teeth on a figure. His hands are sculpted with claws ready to shred and his feet are posed in the shape of the famous paw-like rubber boots that Chaney wore for the role. While his shirt and pants are nicely sculpted with buttons, seams, and plenty of wrinkles. Although I was interested to see there are no rips in his clothing or fur sticking out in patches like the Minimates version of him portrays. 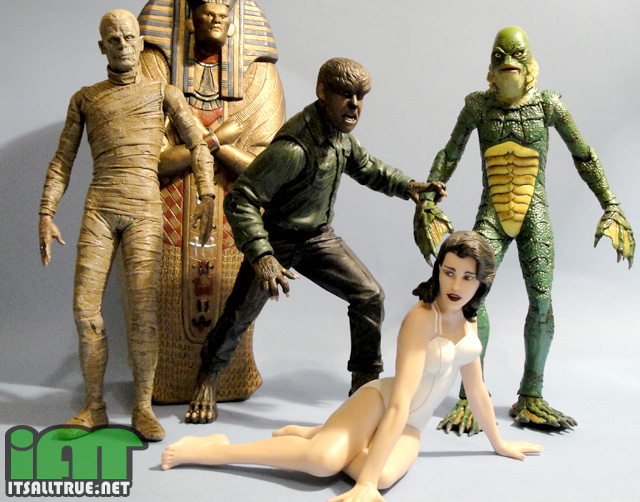 Like the Creature and the Mummy, the Wolf Man’s paint job is simple yet nicely done. Brown fur, black nose, and… green shirt? It never really occurred to me until now that I don’t actually know what color the Wolf Man’s shirt is. The original movie is black and white, and I can’t recall ever seeing any colorized photos. Also, if you look at Wolf Man models and figures, you’ll see that some have blue shirts while others have green. Personally I prefer the green. It adds some color to all that brown and dark gray.

One little detail I really liked about the paint is the shadow/dirt effects painted on his shirt. It makes him look like he’s been out in the woods at least. Continue to Page 2…