I got into Transformers Animated so late that the only releases I’ve “waited for” have been the 4 recent Toys R Us exclusive figures (& some unreleased items). I haven’t gone back and gotten “them all”, but I’ve picked up my favorite characters. And when it comes to favorites, that certainly includes Rodimus Minor.

Wow. That felt wrong to type. Rodimus Minor is one of my favorites? Let’s try Hot Rod is one of my favorites. Or Rodimus Prime is one of my favorites. That’s who this guy is after all. He identified himself as Rodimus in his one appearance in “Transwarped” and he was leading a group of Autobots. So why the name change? According to folks at Hasbro, there were too many “Primes” in the line. Okay, I understand – but Minor? Sounds like he got demoted for losing the space bridge. Ouch.

It’s okay though. He’s just Hot Rod at my house anyway, but I’ll try to remember to call him Rodimus for this review. 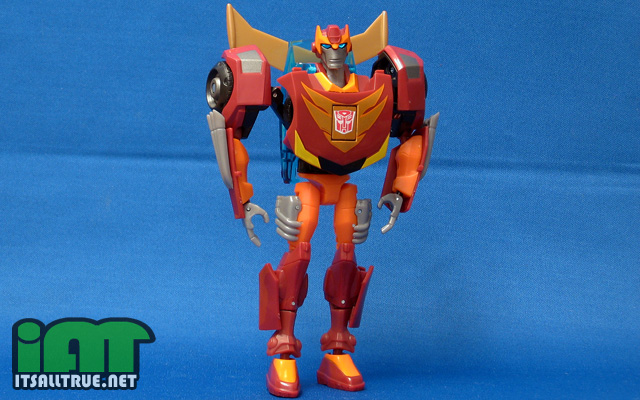 While Rodimus’ alt mode is supposed to be a car from the “far future” of 2005, it was really based on a 70s car, the Dome Zero. His alt mode was just one of the things I loved about Hot Rod when I first saw him as a kid (you can read a little bit about that in my request for a new Kup). He looked like a car of the future to me and while there have been a few different incarnations of Hot Rod over the years, I’ve always been more interested in versions that matched that original look. Here, the toy designers have done a great job of modifying that original look to match the animated style – classic colors, flaming decals, giant spoiler, it all checks out. The tailpipes have moved up a bit and I’m not sure how functional they are up there with the spoiler, but he stills look good. And yeah… he’s a bit mistransformed in that pic. The driver’s side ‘door’ does clip down all the way, but I’ve had a heck of a time with that particular point since the piece must clip both above and beneath the windshield… at the same time. 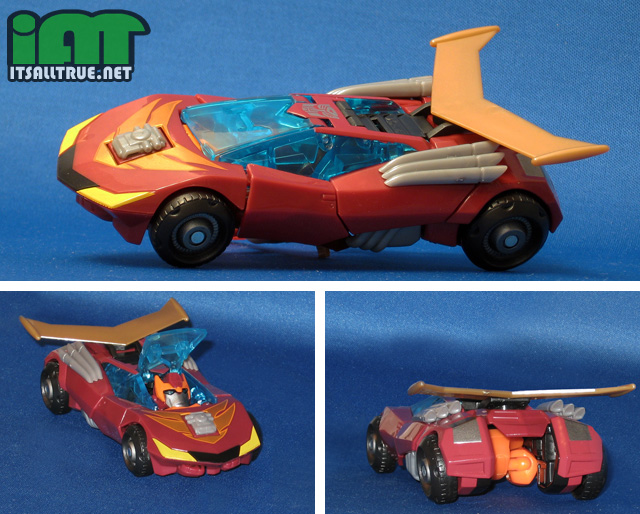 This is just for fun, but if you don’t follow step 11 of the instructions, you can have Rodimus looking up at you from the cabin of his alt mode. I just find that funny. One thing I didn’t like though was the empty space in the rear of the vehicle. I don’t know what it would’ve entailed, but I wish the designers had put one more fold out panel there to cover the gap in the back or include an accessory that can double as a tail pipe like the Classics version had. From every other angle though, he looks great in his alt mode.

The transformation process is rather interesting. His shoulders are formed from the rear of the car instead of the front. He’s not backwards – his hood is still his chest, he’s just been designed to fold in half – his waist resting in the back of the car while his feet clip under the hood. This makes him relatively kibble-less as far as Transformers go and helps achieve his Animated look pretty well.

As I said above, I had a little difficulty with the “doors” which are situated on the sides of his calves. He transforms easily and instinctively enough, but you have to clip the “doors” up so they go under the windshield and then down so they fit over clips on the hood piece. I’m a little afraid that I’m going to break or snap something when I transform him. Otherwise, I like everything else about the process – even the option to flip the engine/emblem piece back and forth in either mode. 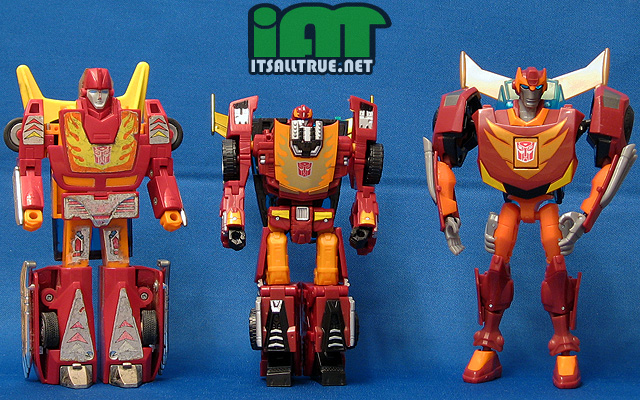 Okay, I know that my Generation One Hot Rod is looking a little worse for wear, but he’s my original – one of the few Transformers to survive the flood that did take Rodimus Prime and so many others. I keep meaning to buy a reissue/encore to have a mint one too, but I treasure my original. He’s just too cool, even torn up. Continue to Page 2 for the Robot Mode portion.