Before my next Revoltech shows up, I thought it’d be a good idea to review my last one. Moguera is the thirteenth Sci-Fi Revoltech to be released. He came out the same time as Mothra, but is far less known. So he became one of those figures that I was hoping was cool, since I didn’t know who he was either.

Moguera first appeared in the 1957 movie, The Mysterians. Like all good alien invaders the Mysterians not only desired Earth, but our women also. One of the many weapons they used was two giant mole-like war machines called Moguera. The Mogueras could fire eye lasers and burrow underground. The first one terrorized the Japanese countryside until the military blew up a bridge it was crossing, sending it plunging to its death. The second Moguera was released to stop the humans from destroying the Mysterian’s base. It burrowed under one of the Markalite Cannons the humans were using, causing the cannon to topple down, and crushing the second Moguera to death. The Mysterians should invest in better war machines, I think. 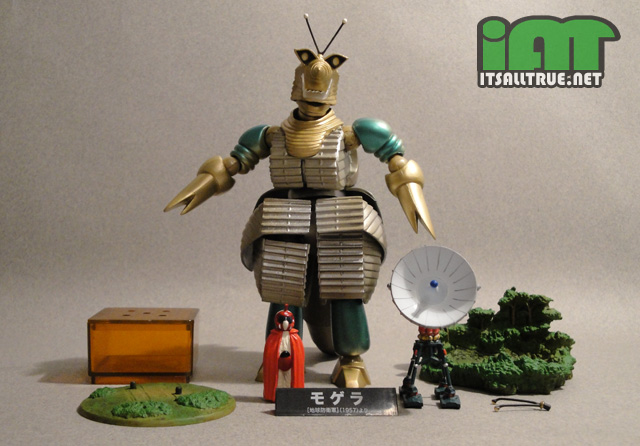 OK, let’s get this out there, Moguera is lame. Although my original plan was to buy all the kaiju Revoltechs, especially the Godzilla-verse, Moguera was the first to really put that decision to the test. When the pre-order went up, I didn’t know anything about the character. Also, he looked like a toaster with arms and legs. Not exactly a look that screams “super-articulated”. But I took a chance anyway. (The fact that he came out with Mothra, which would save on shipping, didn’t hurt either.) 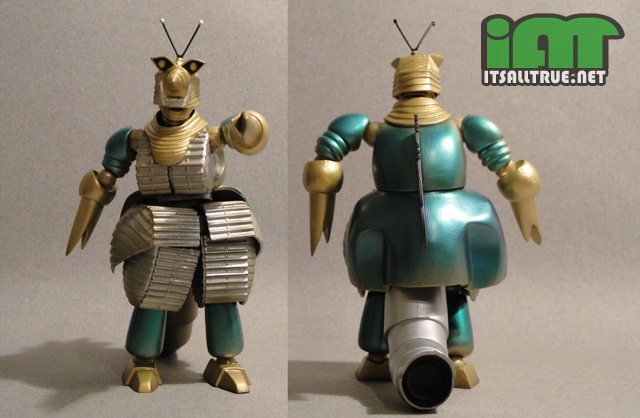 Moguera’s sculpt, done by Takuyma Katsuo, is incredibly accurate to the original Mysterians movie. One thing I’ve learned to count on, even if I don’t know much about the character, is that I am always impressed with the amount of detail these figures contain. Moguera’s main body is ribbed and reminds me a lot of tank treads from the front. I’m assuming this is to allow Moguera to travel through the Earth. It’s a different look from the layered plating on his sides. From behind, with the smooth backing, it looks like Moguera is wearing a cape. His arms, legs, and tail are also smooth. This gives the figure an interesting texture overall. You don’t usually see this much rough and smooth in one place. 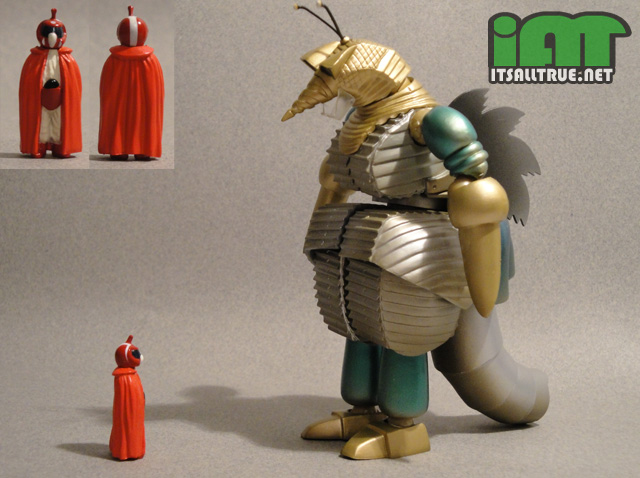 There are also some really great textures like his ribbed neck and the cross-hatching on his head. His nose is a large drill bit (which sadly doesn’t turn); while his translucent lower jaw looks like the bottom half of a scoop. My favorite part is the huge saw blade on his back. Before getting the figure, I didn’t realize what that large fin was. But now that I’m holding him in 3D, what’s cooler than a giant rotary saw blade sticking out of a mole robot’s back? 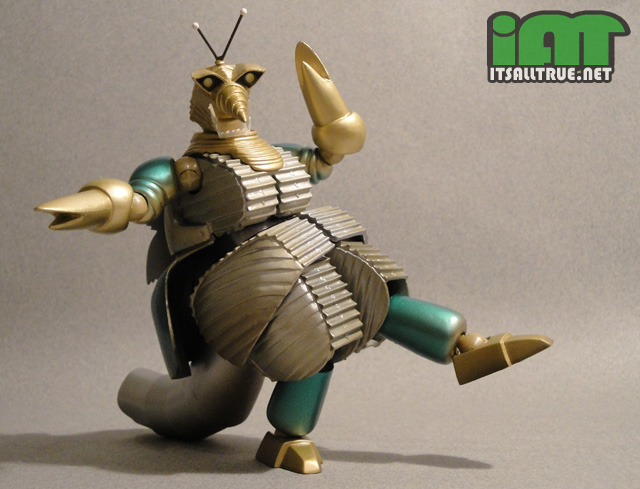 Moguera’s paint job, like most of the other kaiju, is very simple but also convincing. Most of his body is molded in silver, while his head, claws, and feet are all gold. These are very effective at conveying his robotic look. But what really makes this figure shine are the metallic teal paints that cover his back, biceps, and shins. I would love to see more robot figures get this kind of beautiful gradient looking paint. Continue to Page 2…