For the last few weeks, I’ve been trying to find one figure from Iron Man 2 Series III. I wasn’t having much luck. I kept finding the others, but the modern armor is odd and the Centurions haven’t been painted well. Finally, I lucked out while on a trip to Oklahoma this week and the Iron Monger came home with me.

Up until now, I’ve been reviewing the Iron Man 2 figures, at least the comic ones, in groups. But Series 3 has left me a little cold. The first problem is that I’m still having trouble finding it. The local Walmarts seem content with the piles of wave one and two figures. When I have found it, it’s usually picked through and the remaining figures don’t have the best paint work (I hope to find a good Silver Centurion Iron Man someday). The sculpts on the Modern and Arctic Armors (they’re mostly the same) seem off to me. I really wanted the Iron Monger, but he was always gone. I hit the mother lode on Sunday and got to choose from no less than a half-dozen Iron Monger’s (and still no good Centurion’s…). Finally, the blue giant was mine. 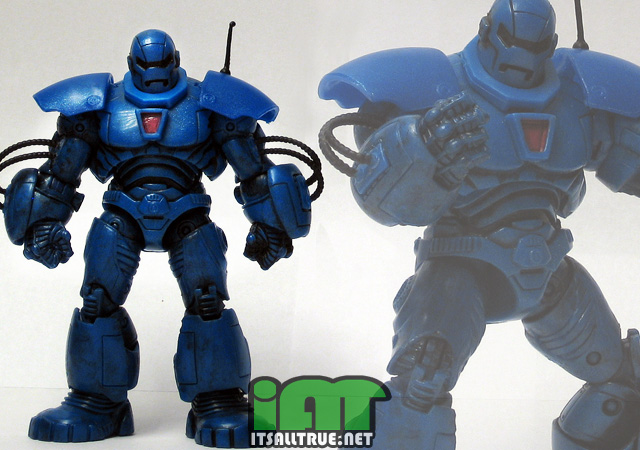 The Iron Monger reuses a lot of the Hulkbuster figure from wave two, but he wears it better. He features some add-on pieces like the power unit on his chest, a collar, and the shin and forearm guards as well as all-new feet, hands and head sculpts. The biceps have been modified a bit to accommodate the tubing from his forearm guards. I like all these added details, but I think the head is what really sells Monger as a better figure than Hulkbuster. The HB armor is distinguished by its recessed helmet – it looks right, but it made the figure seem smaller. Monger has a normal, full helmet and it flows better with the height and bulk of the armor even though he is its second use. 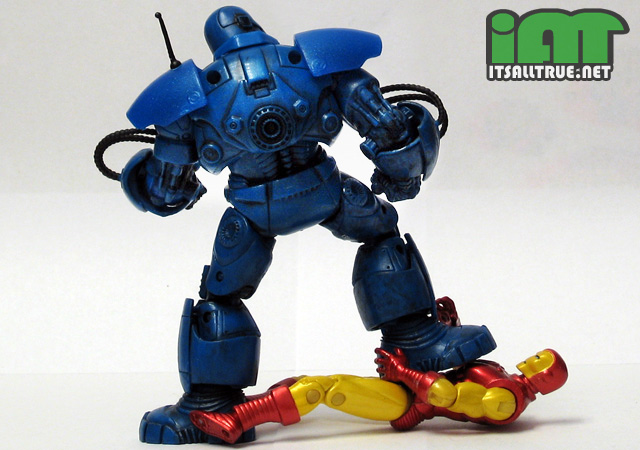 Of course, there is one drawback to his being a Hulkbuster reuse is that it’s not terribly comic accurate. This is going to bother each of us in our own way. For what it’s worth, I think Hasbro did a good job of replicating the armor with the add-on pieces. In most cases, the inaccuracy is too much detail in places where there should be little to none. I can definitely live with that.

Like the Hulkbuster, Iron Monger features ball joints in the shoulders, elbows, hips, and ankles; swivels at the head, wrists, and thighs; double hinged knees, and the chest pivot. He also has a hinge with a little bit of give in the shoulder pads. The bulk (and added bulk of the add-on pieces) limits the articulation somewhat, but I was able to get some good poses of the Monger.

Monger is cast in this great metallic blue. Even if I wasn’t buying this line, I might have picked him up just because of how sharp he looks. Since I am buying this line, I’ve got lots of red, gold, greens, and silvers to put him with and he really pops next to them. He’s got a black wash to help bring out definition as well as the paints app for his power unit and his face.

The black wash and face paint apps can make for some funny changes to the figure, by the way. When we get to pick paint jobs, a rarity these days, Sil likes to jump in for me and find the best one. While she was sorting through the Mongers, she thought it was funny that some looked sad and others angry. It was all due to how much the wash accumulated around the mouth and eyes and changed their overall shape. I opted for an angry one, though the appeal of a blue, blue guy was very strong.

Overall, this may be the only Comic Series III figure that I end up with and I don’t mind one bit. I love his color scheme and his overall look. He’s still hanging out with me at my desk instead of joining his buddies on the shelf. I’m a little worried about the softer plastic tubes splitting off from the arms with too much play, but I’m being careful with them. The rest of the figure is pretty rugged though. He’s thick, heavy, and feels well worth the $8 I paid for him. Looking at the upcoming Iron Man release schedule, all I have to say to Hasbro is “more like this, please.” 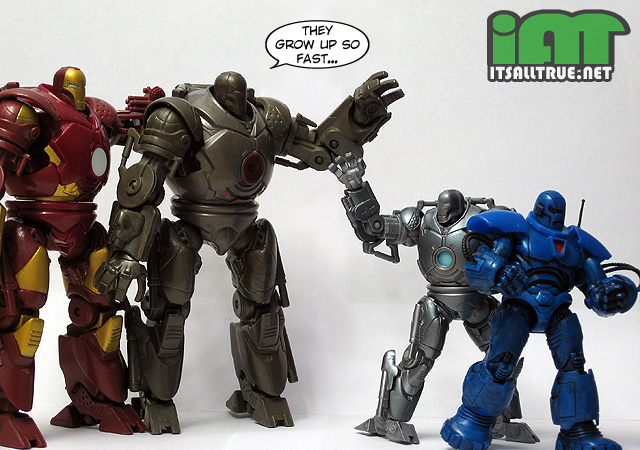