I don’t really have a Transformers budget to speak of, but I try to keep an eye on things to buy a few favorites. I was hooked as a kid and there are certain characters near and dear to me. A recent e-mail request from reader Jason L. reminded me of one favorite character that I’ve never had as a toy: Kup.

The first thing we should point out is there is already a Kup toy (though I’ve never owned one). This isn’t like Arcee where we waited for nearly a quarter of a century to just get an [animated] version that transformed into a car. Kup debuted in the The Transformers: The Movie and promptly received a G1 toy that same year and a slightly reworked Targetmaster version immediately after. So why is he being requested, you ask? Two reasons. 1) That was nearly twenty-five years ago he hasn’t been given a retail release since and 2) as Jason L. pointed out to me – now seems like a good time to ask. We’ve already got Blurr, Scourge, and Wreck-Gar coming up in the Generations toyline. 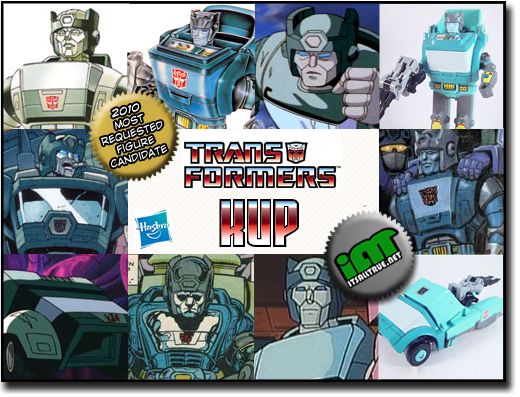 I’ll admit to still having a soft spot for Transformers: The Movie even though I know it’s not exactly the best movie. It was the first movie I remember my Dad taking me to as a little kid. I remember making a big deal about it, and I remember having a blast – though I’m not sure why Mom stayed home that day – and I remember going out with Dad to buy some Transformers immediately after. Looking back, I’m a little dismayed at how easily I went from watching Ratchet, Ironhide, Wheeljack, etc all die and have them replaced in my heart by Springer, Kup, and Hot Rod. But that’s what the movie was really doing wasn’t it? Trying to sell the new toys by killing the old toys.

But since those first releases, the Movie Transformers, Hot Rod and Ultra Magnus aside, don’t really get a lot of love. Arcee finally found her way to retail thanks to her animated appearances. Blurr just got his second figure the same way. Springer got back into stores as a decent Evac repaint at Target last year. Wreck-Gar’s back. Heck, even Wheelie got a Legends release a year or so back (though I never found him or Cosmos). But Kup? Well, Kup did get a redeco as a Botcon exclusive in 2009, but I’m not going to let that disqualify him because it didn’t really feel like Kup. In fact, a few of the movie characters have had Botcon releases, but that’s not what we’re talking about here. These guys need new figures not repaints that can be done quickly for a con. In Kup’s case, it’s time to see what a Cybertronian Pickup Truck would look like in the 21st century.

If you’re not familiar with Kup, the one thing you need to know about him is that you should keep off his lawn. This guy is a veteran at being a veteran. He’s the quintessential old soldier that’s still hanging around. He’s like if Ironhide had lived to ripe old age. He fought Decepticons before they were Decepticons and travelled around Cybertron when it was all uphill. And if you do find yourself on his lawn, be prepared for a story or four about this situation reminds him of. He’s like your Grandpa if your Grandpa was a Transformer.

There are plenty of childhood favorites that I’ve yet to see get a second figure in the TF franchise, but, like Jason L., I’m somewhat partial to these movie characters. If Generations has room for Kup, I’m more than happy to purchase a new version of the old and busted Transformer. And now is the right time. Generations is drawing heavily from 84-86 as part of the mix and 2011 does just so happen to be the 25th Anniversary of The Transformers: The Movie.