Along with the Universal Monsters, I also noticed a new wave of Marvel Universe Mates at our local Toys R Us. I fell out of Minimates collecting when the DC line was cancelled, but every once in a while I’m still tempted back by certain characters. Looking at this Dr. Doom in the store, I couldn’t pass him up.

This is the fifth version of Doctor Doom in Mini form. I picked up the first one way back in 2004, but haven’t bothered with the other versions. (I do keep meaning to go back and get that Secret Wars Doom though. He always looked cool to me.) This version resembles his first comic book appearance, and has a great design. I love the classic look on his mask! It looks like he popped right off the comic pages. And if that wasn’t enough, he also came with an alternate head. I think Doom’s unmasked face may be even better. He’s got this cocky, regal, “I’m going to destroy Reed Richards” look to him. 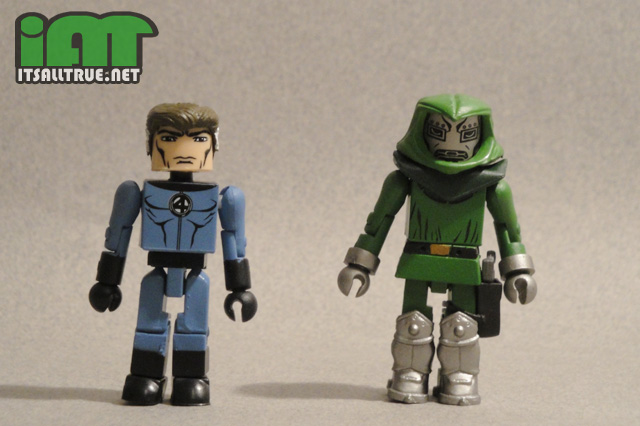 Doom also has a couple of unique pieces that set him apart from the others. His hood is very reminiscent of something you’d see Green Arrow wearing, but it works perfectly here also. It bunches up around the neck and has this nicely sculpted seam running along the center all the way back. Instead of a cape, this Doom has a collar piece. It looks good on the figure, but I can’t help thinking a cape would be perfect with this new hood. Especially since they wouldn’t be attached. He also has these awesome boots. Sculpted to look like knights armor, they are larger than regular Minimates feet. Not only are there armored shin/knee guards attached to cover the bottom half of his legs. But the tips of his feet have little spikes, because Doom is a kicker. 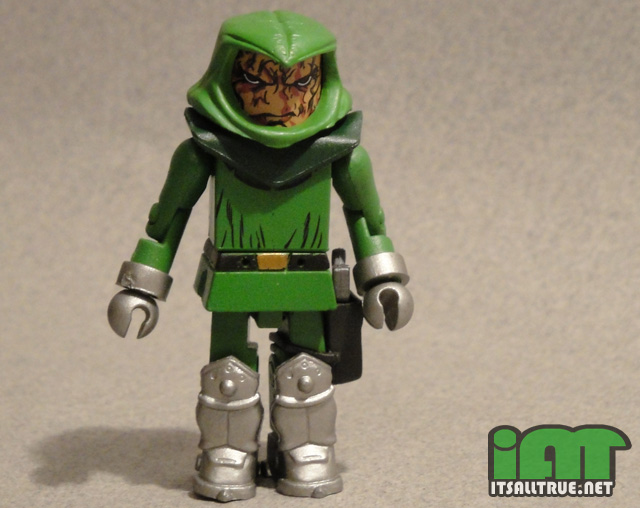 Doom comes with only one accessory: his sidearm. It’s not his classic revolver, which I was expecting. It’s this strange little ray gun looking thing. It fits nicely into the holster at his side, but in his hand he holds it at an angle.

Appropriately, Reed Richards is Doom’s companion in this set. He’s got the basic Minimates body, but I think he has a new hair piece. I’m not enough of Mates aficionado to say for sure, but I’ve not seen this particular hair before. Whether it’s new or not, it still looks good on him and nicely frames his very serious face. 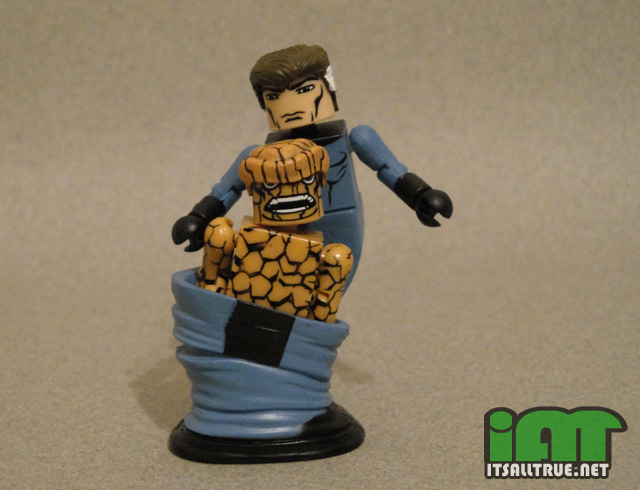 Reed may appear to be boring, but he comes with a great accessory. It’s an alternate lower torso that’s sculpted to look like he’s wrapping around someone, or some Thing. There’s a hole in the middle where you can place another Minimate. I love the idea behind this piece and wish the Marvel Universe/Legends lines would add stuff like this. There is a slight problem with it though. The hole on the inside is only big enough to hold a regular Minimates body, one that has no extra pieces or clothing on. So sadly, it wasn’t really usable with the Doom that came in the set. But this is just a minor flaw. I still love the idea behind it. 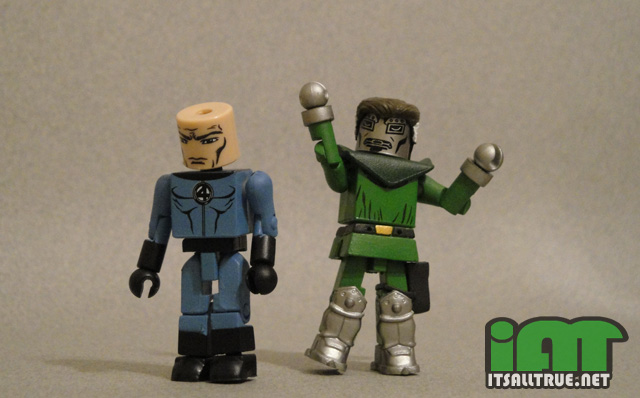 In all, I’m pretty happy with this set. Especially since I only bought it for one figure. The Doom has a bunch of new pieces and a great look him. The Reed is pretty simple, but that stretched out torso piece looks great for displays. Minimates two-packs run about $8, which is totally worth it if you’re a fan of the series or just the characters..