On the subject of paint, who needs it? This figure is black. There’s some gloss on the boots and a little silver on the buckle, but that paint on the mask is pretty much the majority of the paint. Mine could be a little neater, but it does look alright up there. 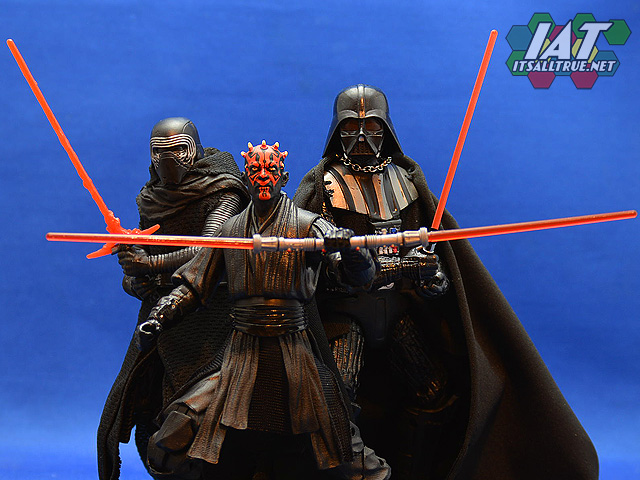 Articulation is what we’d expect for a 6” black series figure: ball-joints at the neck, shoulders, mid-torso, elbows, wrists, hips, and inverted ankles; swivels thighs; and double-hinged knees. This is where the cloth robes come in handy because all of this articulation is useful! The robes and the soft plastic robes underneath them do a great job getting out of the way when you want to do deep poses. I would like a little more articulation out of the neck and the elbows, but he’s fun to play with and pose. 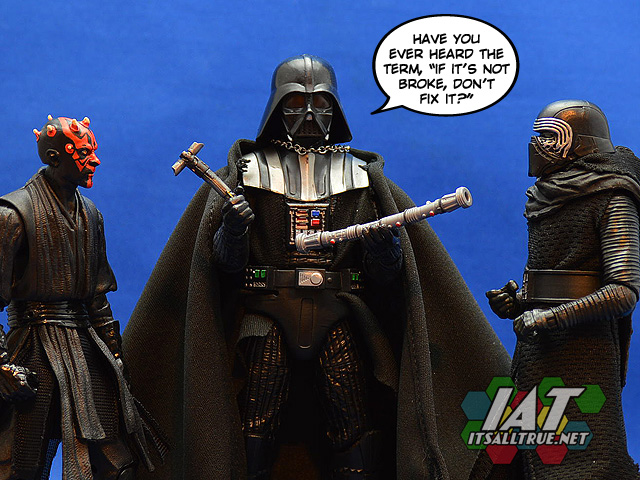 Kylo Ren included what will be his trademark accessory, his lightsaber. This piece was probably the first big split between fans of the movie. It was either “whoa!” or “lightsabers don’t work that way” as soon as it appeared with very little agreement in between. I thought it looked neat and I don’t really know or care “who lightsabers work”. I do think it’s funny that they have to keep trying to up the Sith’s lightsaber game in each era. If a lightsaber is the epitome of cool, then how are dual blades and cross guards improving on that? (They manage to do it though).

The accessory seems to be accurate and modeled well. The blade is removable, so that’s cool too, but I would like somewhere on the figure to store it, besides just tucking it into his belt. I’d also like the blade to be a little more… vibrant? I’m not sure, but it just seems a little dull. 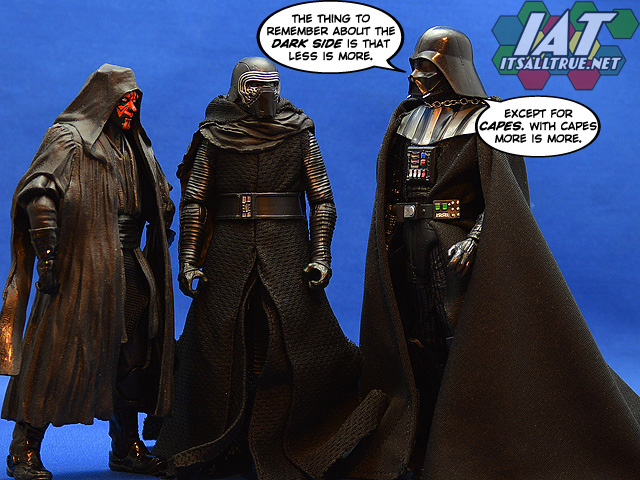 Overall, it probably sounds like I’m knocking this guy down. I’m not. He’s a cool visual and he looks great hanging out with Vader & Maul. He makes me enjoy having him despite being covered in black rags. If I could pull the head and belt off and see how he looks without, I’d prolly love him more. The articulation is strong with him and he’s able to get some great lightsaber poses out of it. He’s a fun figure to have, even if he’s soft-gooded from head to toe.