“Nothing will stand in our way. I will finish what you started.” – Kylo Ren. “Star Wars Episode VII: The Force Awakens” (2015)

Normally, I kick off these reviews by talking about the characters behind the toys I’m reviewing. That’s kinda tough to do when the character is basically going to be a giant black hole until the film comes out in December. Moreover, spoiler sensitivity seems to be at an all-time high lately. If I did discuss what we do know… well, some folks are trying to preserve their original trilogy, five-year old experience by going into the movie super cold. You’d think that would mean that they would avoid this, or any, review like the plague, but you never know.

So we’ll stick to basics based on unavoidable visual cues. We know Kylo Ren is at least sort of Sithy. He wears black and carries a red lightsaber, even if it’s a little more feral than we’re used to seeing. That about covers it. The trailers review a few more details, but not really that much more. 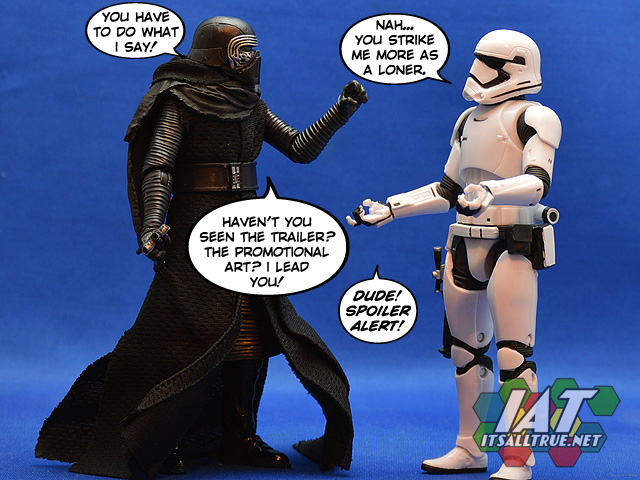 When the figures dropped on Force Friday last month, I didn’t really plan to buy any of the first five. The second, elusive, wave was more up my alley with Phasma and Target-Product-Placement guy. The first wave was around plentifully enough (throw a brick here and you’re bound to hit a WM Supercenter). Characters like Finn & Rey will need to endear themselves to me to get me to buy a figure probably (and maybe even a better version than these first ones). I did get weak and pick up a Stormtrooper early on. He’s cool enough. And then I doubled down and snagged a Kylo Ren.

That’s not to say I shouldn’t have bought Kylo Ren, he’s got a pretty fun, albeit basic, figure. 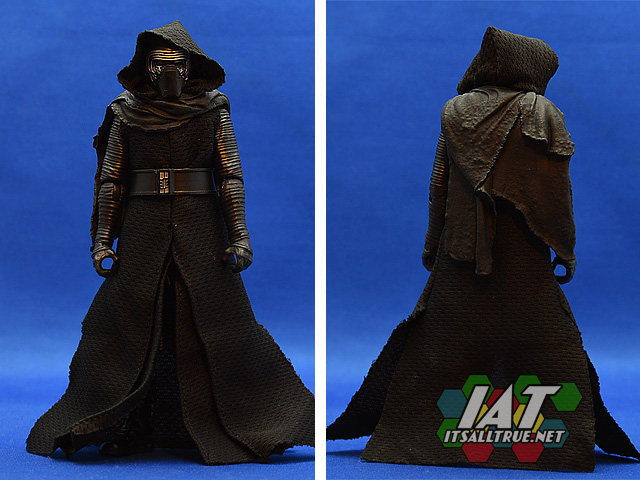 The sculpt itself is entirely new, though it’s largely hidden by soft goods. I really try to like soft goods on figures, I do, and that includes accepting that it’s the better options in certain circumstances. This may well be one of them, his cloaked look would be hard to pull off with soft plastics that didn’t completely compromise the figure. But I’m still not a fan of the robes here. It’s difficult to get the hood to look convincing so I’ve opted to fold it down in back. The length is another issue. Like Vader, the robes run long and bunch up at the feet. This may well be accurate, but I would probably like it better if they were a tad shorter. 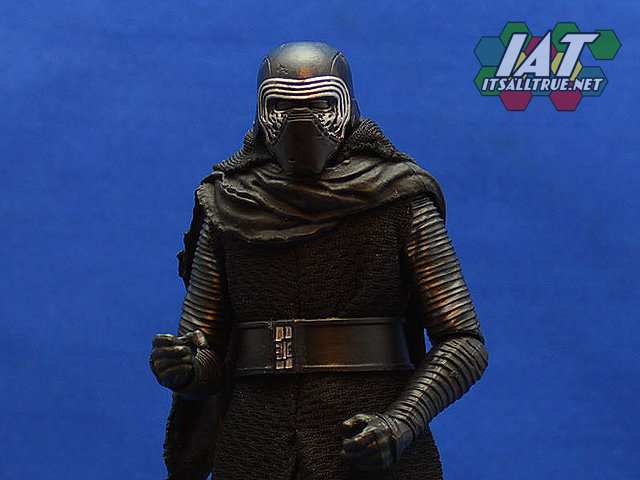 I haven’t removed the soft goods because I’m not sure I can get them back on. The “belt” piece isn’t easily removable and I strangely can’t get Kylo’s head to pop off as easily as the rest of the line. I don’t want to cut it off, so it’s just there. It’s a shame because the sculpt underneath looks great. I love the ribbing sculpted on the arms and that carries over to the chest and a lengthy skirt piece around the otherwise plain legs. Combined with the soft plastic neck piece, I think it’d look fantastic. 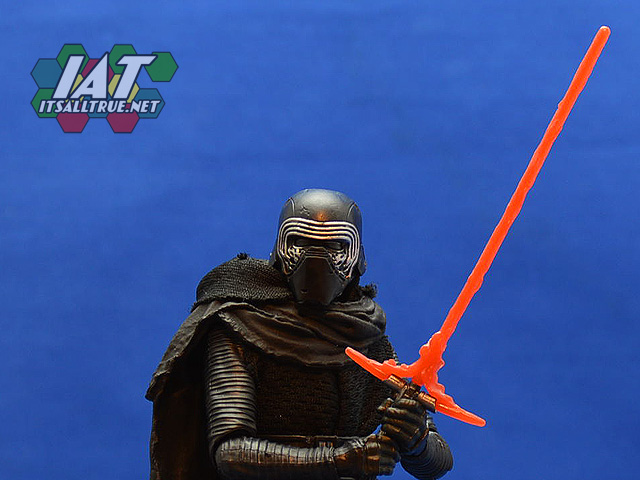 On top of everything is a really nice head sculpt. It’ll be cool to get an unmasked figure later, but Hasbro did a great job on the helmet. I’m fascinated by the various dents and dings up there – each one represents a story and I’d like to hear them all. I also like the 60s retro black/chrome look and that’s captured here (though the paint could be brighter). Continue to Page 2…