One of the difficult realities of the toy world is lead time. If a toy company sees a property that has potential, they can’t really strike when the iron is hot. The production process is simply too complicated and drawn out between conception and retail. By the time the product reaches stores, that potential may be nothing more than a lump of hard coal. So toy companies do what they can to mitigate lead time, and DC Direct is one company that has a unique advantage – they are part of DC Comics and can release action figures during the comic events the toys are appearing in. This time, DC Direct has released the first wave of Blackest Night figures right in the middle of the crossover of the same name. These aren’t just action figures, they’re little plastic tie-ins.

If you’ve been in a coma, Blackest Night is the Green Lantern crossover that’s been brewing since Hal Jordan’s return to the title in 2004. The basic outline is simple: the Green Lanterns are now part of a larger mythos with other ringbearers who utilize various emotions that correspond to their particular color of the rainbow. The different colors don’t all get along, but they’re being forced to fight alongside one another against an eighth corps of reanimated dead, the Black Lanterns, that feed on emotion and want to end life as we know it. Creepy. Of course, it’s fantastically more complicated than that, but I doubt any of you were in a coma, so we’re going to leave it there. If you’d like to learn more, check out the Blackest Night mini-site. 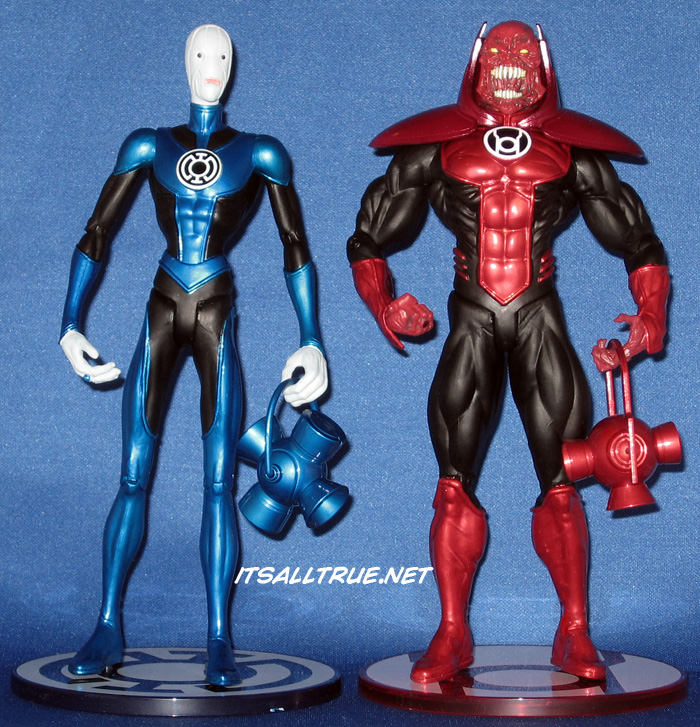 I should say first that I’ve been out of the DC Direct game for awhile. Back when they started, I was ecstatic about Wesley Dodds, Wonder Woman, and Swamp Thing. I thought the time had come for a full line of in-scale, uniform DC comics figures and I gobbled up every release for the first few years, but then tapered off as the figures being chosen appealed to me less and less. The last DC Direct figure I purchased prior to yesterday was the Sinestro Corps Cyborg Superman from July 2008. I’ve switched to DC Classics for my DC fix, and while I do hear the siren call of DC Direct every now and again I try to avoid it. But these two Blackest Night figures looked too good to pass up. The downside was that I sort of forgot the annoying things that DC Direct does with their figures and got a crash course with these two. Still, I’m mostly happy with my purchase. 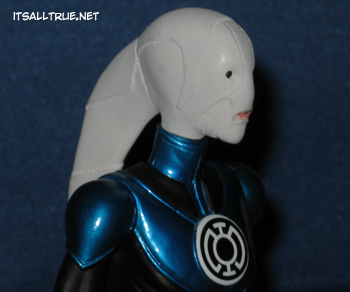 Walker features unique tooling and his long, lanky form is well-captured. I like the details on his face and the dimensions look right, but I’m not sure what expression I’m looking at when I look at him. He kinda of looks like he got out of the car while it was still in drive and he’s looking at what his mistake has wrought. Since he’s the lantern of hope (& maybe a little zealotry), I’d have liked to have seen a more peaceful expression. I’m not thrilled about the hands either. I don’t know what I’d like to see different for sure, but I’m not happy with them – the way they’re positioned seems floppy. But he overall figure still utilizes the sculpt well and even the Blue Lantern Ring has the symbol detail in the sculpt itself.

The paint is what lets this figure sing. The sharp metallic blue is perfect for the figure. It balances with the matte black areas to create a defined look. I think the paint is what draws you in and convinces you that you need to buy it. The symbol on Walker is crisp and finishes off the look.

Then there’s how the body is articulated, or rather, how it’s not articulated. I was so distracted by how good the sculpt and paint were that I wasn’t really thinking about how static the opened figures would be. I didn’t totally forget – I knew I was buying DC Direct – but I was still disappointed by the choices for the cuts. Walker has a swivel head, ball shoulders, hinge elbows, hips, and knees. From the ball shoulders down the figure’s articulation is basically worthless. He can only stand straight up. The shoulders and elbows are nice, but without wrist articulation the hands are permanently sculpted leaning in and there seems to be no way to get the arms into a convincing pose. And the swivel head is always a wasted opportunity. 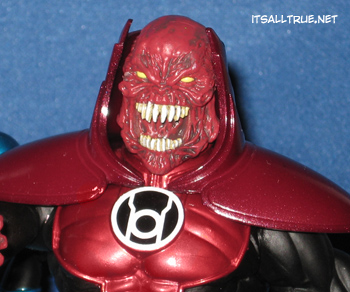 Atrocitus is another all-new sculpt and again the sculptor does a good job of capturing the costume details. I like the piping on the uniform and even though I’m not a big fan of screaming head sculpts, it works here (doesn’t he look a bit like James Earl Jones in Field of dreams? “They’ll come, Ray!”). But there is good and bad. His arms are permanently in the “which way to the gym” pose since both biceps were sculpted at an angle instead of being at his sides. To top it off, the hands are severely tilted inward at the wrist. It’s just as difficult to find a natural pose as it was for Walker.

Again, the paint covers up for the other misdeeds. He’s painted in a vibrant metallic red. His shoulder pads are in a darker molded red, but it doesn’t stand out as much as I thought it would. His head and hands have both been given a nice wash for detail with crisp paints on this eyes and teeth. His ring appears to be just a glossy red paint spot, but that’s the only paint issue as far as I can tell.

Articulation is this figure’s weakness too. The arms are awful – if they just had a bicep swivel it wouldn’t even be an issue. He does have wrist cuts, but the wrists are tilted inward so far that they can only look tilted up or tilted down. And, like Walker, the main trunk of the figure has no useful articulation below the shoulders. Atrocitus also has a swivel head, but his shoulder armor restricts it a bit.

Neither figure can really do much but stand on the shelf – which is one of the reasons I left DC Direct behind originally. It’s annoying to see the added articulation on [the upper body of] the History figures and be left to wonder why DC Direct doesn’t implement those same joints across the board – particularly in figures like these which were sure to make a big splash. 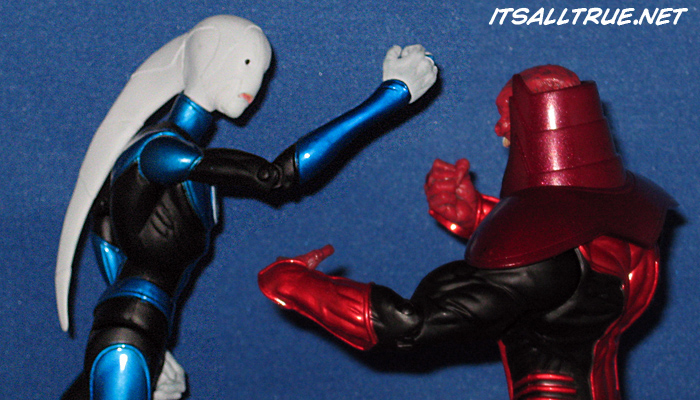 I haven’t been keeping up on the various packaging styles from DC Direct, but this wave of figures was sealed in plastic clamshells that had to be cut open. They looked nice on the pegs, but I always prefer bubbles on cardbacks. I don’t like to have get a box knife or scissors to free my toys. Unforunately, I neglected to take a shot before I opened them, but a quick search on eBay will net you the packaged picture if you’re interested.

Both figures come with a stand and a lantern. The stands are similar to the recent GL ones with the large translucent, appropriately colored, circle stamped with the corresponding corps logo. I’m happy to get the lanterns (Larfleeze won’t be right without one). The blue one is a repaint of the stand green lantern, but that’s accurate. Atrocitus’ red lantern is unique but it matches up with the one in the books from what I remember. The only issue with the accessories is that both figures can only have the lanterns hang loosely from their left hands and there is no articulation to get any decent poses with them. Neither can even hold the lantern facing forward.

This wave of DC Direct figures looks to be selling really well and while I think a lot of that has to do with the popularity of Blackest Night, I think many folks are like me and planning to mix these figures into their DC Classics collection. Now, I don’t normally mix, but I wanted to try it here because I’m not sure if DC Classics can get around to these guys anytime soon. (Mattel does have a Sinestro Corps 2pk on the way, but it spins out of last year’s Sinestro Corps War storyline). Plus, the DC Classics buck can make a shelf look generic. So I think salt and peppering in a few properly scaled DCD figures might help shake things up. But are these two in scale? 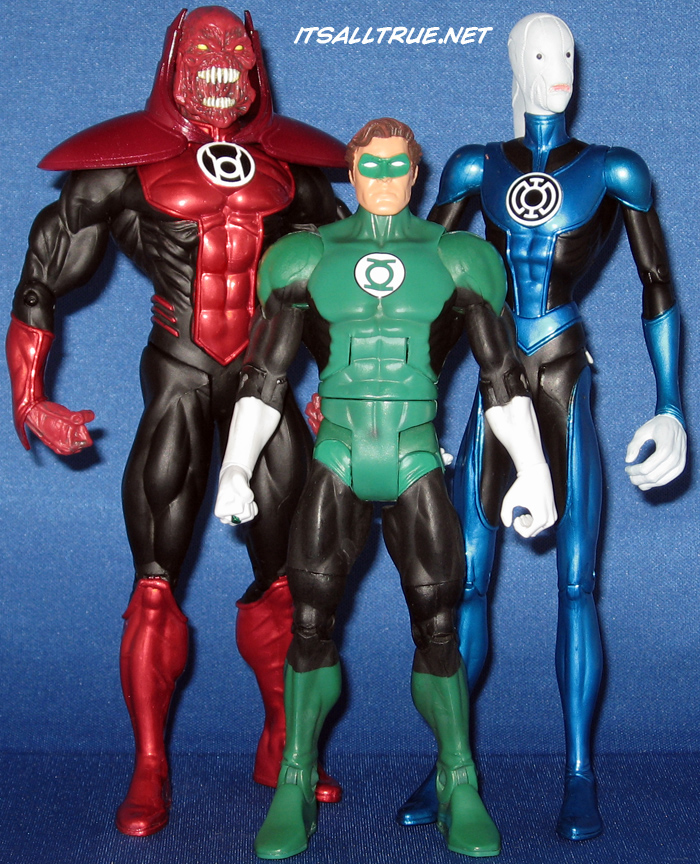 Truthfully, I can’t say for certain, but I think so. Atrocitus should be oversized. Saint Walker is lanky and should be taller too. They probably aren’t as tall in continuity as they are in the above photo, but I think it looks okay and that’s what I’m pinning my contentedness on. (Conversely, they look horrid next to Sinestro because of the improper buck used for his tiny DCUC figure – I may need to pick up last year’s DCD Sinestro, come to think of it). Your opinion may be different, but in my toy collection these two (and other upcoming Blackest Night figures) will fill the DCUC ranks. It’s a big step for me because I usually hate mixing toy lines together, but I just like these figures too much not to.

Overall, the figures are from DC Direct so I can’t really knock off points for the lack of articulation – but I want to. It’s a disappointment to have Atrocitus’ biceps flare out or for Walker’s hands to just dangle from his arms. Articulation could likely have corrected for the sculpt’s shortcomings, but without it, it only serves to underline the handful of problems the figures have.

But they still look good and I’m happy with them. If you want them, you need to be checking your comics shops now! I had to hit up three stores today to find an Atrocitus before he sold out. And when I had him safely stowed under my arm, I was pinged with guilt by the sad look on the face of a fellow collector that was just a few minutes late to score the last one (how come there’s no ring that utilizes sadness?).

Despite enjoying these two, I’m skipping Boodikka and all the Black Lanterns announced so far (except maybe Firestorm). But I am already looking forward to next month when we can pick up Kryb and Indigo (11/25 – Thanksgiving Eve) and I’m excited for Larfleeze and the modern Kyle Rayner coming this Spring. I’m loving the Blackest Night (even if it runs across 87 issues :x) and it’s great to be able to have the figures during the storyline. 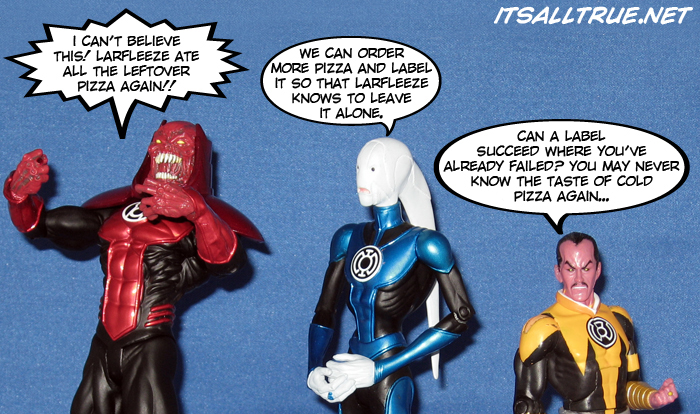