Since I didn’t buy the battle-damaged Iron Man, this will be my last Avengers review for the foreseeable future. It feels wrong. No Black Widow. No unmasked Cap. No Maria Hill. No Coulson. I could go on; this line shouldn’t be over. Anyway, let’s wrap things up, hopefully for now.

Initially, I wasn’t planning on buying any Avengers figures, but two things happened. One, the movie was insanely more awesome than I was expecting. Two, the figures came out much nicer than I was expecting. Well, most of ’em; as I mentioned I didn’t buy Iron Man because Hasbro decided against giving us a Mark VII update and opted for a battle-damaged version. The other figures though – most of the rest get by on their own merits. I bought Loki, Hawkeye, and Hulk because they’re great figures. I bought Thor because he seemed like a good update to last year’s figure that I unfortunately had to pass on. And then there’s Cap. 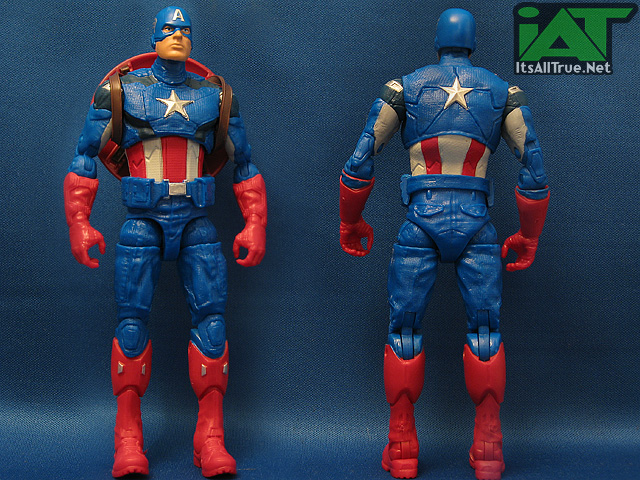 Honestly, it seems harsh to set this tone for Captain America. There’s a lot of things I like about the figure. And I’m happy to have an Avengers Cap. The comic character is one of my Marvel favorites and Chris Evans did a spectacular job in both movies to ensure the film version lived up to my expectations. And while I found myself enjoying this figure, it just doesn’t quite impress me like the others. I’m having a hard time separating if it the awesomeness of the others though, because the figure doesn’t seem lacking. 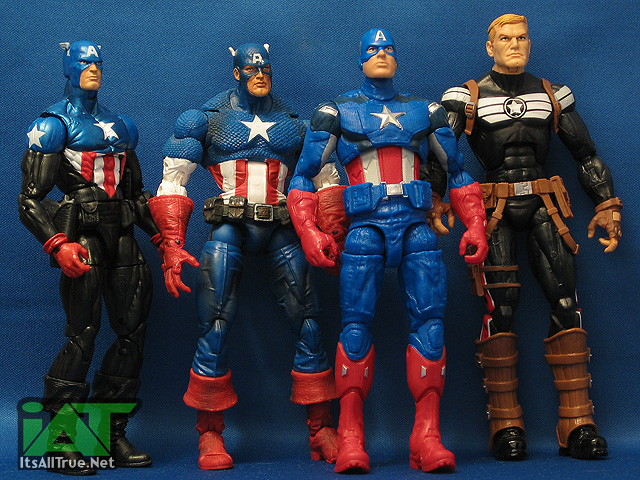 I think some of it may be from the film itself. Iron Man has the benefit of armor. Thor & Loki look regal & appropriately otherworldly. Widow, and Hawkeye to a lesser extent, are in stealthy “special ops” jumpsuits. But Cap doesn’t really have a workaround to being in a superhero costume. I’m not against superhero costumes in films, I wish more of these great movies could feature classic superhero costumes, but they just don’t always translate well. It’s basically the first obstacle to translate a comic into film, and for Cap it was no different. 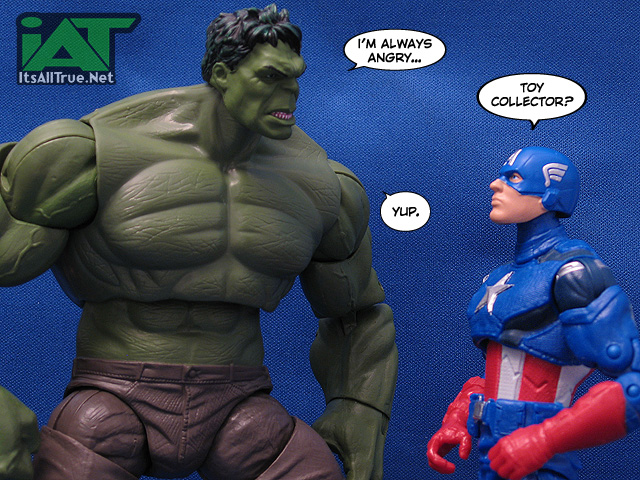 I think the costume featured in the solo Captain America movie was fantastic. I liked the makeshift costume he makes using parts of his stage costume and regular gear (and, frankly, that stage costume showcased the problem on the nose) and I also really enjoyed the costume that the film wraps up with. I still kick myself for never getting around to buying that hard-to-find figure.

Anyway, the Cap costume seemingly took a few steps back in Avengers. I’ve only seen it once (don’t take my nerd card, please!), so I can’t really go back and get specific. It’d sound silly anyway. Was it the fabric? The layers? The bright colors (though I do love bright colors…). It could’ve been anything, the only I specifically remember liking was when he wasn’t wearing the cowl/helmet, so maybe it was even just that. Either way, I just don’t feel the costume upgraded well in the “seventy” years between films. 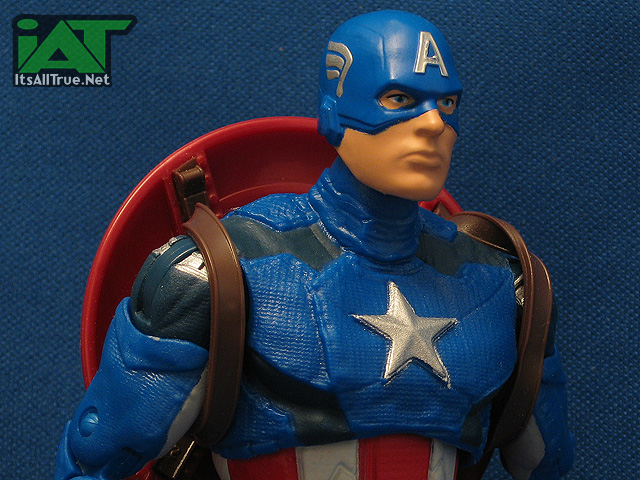 And then the figure, being in this awesome line, recreates that design pretty faithfully. No, that can’t be used as a knock against the figure. For the most part, we have a great 6″ Avengers Cap presented here, but I do think it falls short in one area. Namely, the head sculpt. It’s also in this weird grey area where I want to criticize it, but I do find a bit of Chris Evans in there.

But, whether it be a soft sculpt of thick gloopy skintone paint, it just doesn’t look sharp enough when I put him next to a Hawkeye that looks like Jeremy Renner, a Hulked-up version of Mark Ruffalo, a Tom Hiddleston Loki, and even the decent likeness of Chris Hemsworth as Thor. In that regard, this figure is outclassed by nearly every other head sculpt in the line. It’s just not up to par through that lens and it makes me that much more adamant that an unmasked Cap get released, particularly when we know that Hasbro’s did one for the first film and never released it. Continue to Page 2…