We’ve been a little pressed to fit all the reviews in since we got back from JoeCon. We had SDCC Exclusive Week to get those reviews done. We had JoeWeek to get through those reviews too. But in all of the fun, two reviews got lost in the shuffle. This is one of those reviews. First, I should thank the fine folks that e-mailed me about Vigilante. More than a few people noticed he was missing from the Wave 8 reviews and e-mailed me offering to guest review, to loan, to sell, and even to give me a Vigilante. Dutifully, I turned down those offers because I’ve had Vigilante the whole time. We just left him by the wayside. That’s over today. We’re finishing our Series 8 reviews with the fifth installment, featuring Giganta and Vigilante. 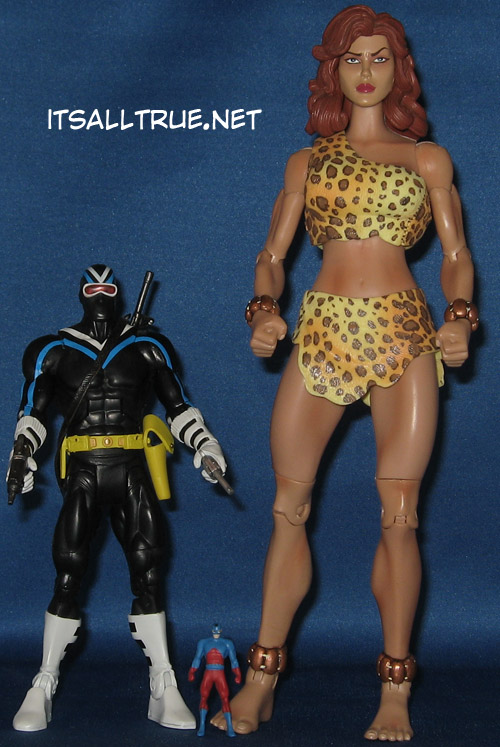 Vigilante is based on the same buck body as the rest of the line, and his articulation is standard for it. For new pieces, he has new forearms, hands, a belt, and a head. One of the things the 4H do to make the constant reuse of a buck body so tolerable is nail the details on the new pieces. From the simple ribbing and straps on his gloves (which are deceptively duplicated on his boots with paint) to the intricately detailed belt, this figure really shines even though he’s got very few original parts. The belt is comic accurate, features a variety of pouches, molded nunchucks, a holster for his pistol, and a level of detail high enough to include the seams and folds in the fabric of the pouches. What has me really amazed about this figure is above the neck. A lot of sculptors might have molded the visor on to the head, painted it red, and said “done”. Not so with the 4H. His visor is a separate translucent piece and if you look closely, you can see on through to his eyes. That’s simply awesome.

Giganta is my favorite C&C (at least until Chemo). She features most of the same articulation as a standard DCUC, but has some changes because of her sculpt. The one missing, the ab crunch, is replaced by a swivel torso hidden underneath her top. The sculpt looks great, so I’m not missing the articulation. An added point, because of how the feet attach to the leg, is her swivel ankles. Her sculpt is solid – she’s mostly a buck female (bring on Elasti-Girl, please!) with the only details specific to her being her ankle and wrist bracelets, as well as her head. Her clothes are soft goods with the fur detail sculpted in and are placed over the figure. 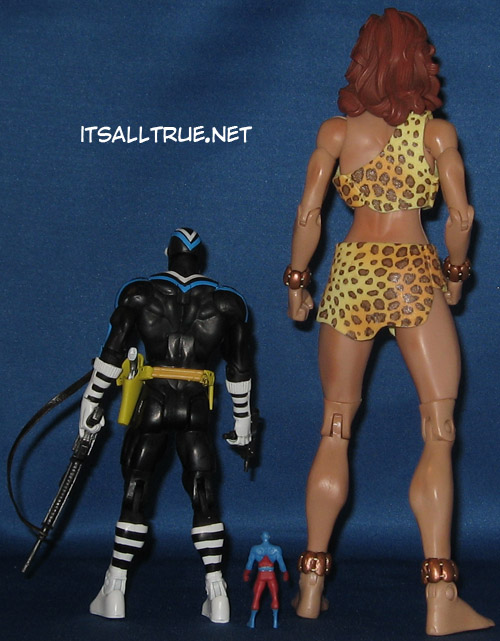 As we’ve seen it improving over recent waves, there’s no real paint issues with these figures. Vigilante is painted well. The blue and white lines on his costume are crisp and the white on the gloves/boots is free of slop too. This makes for a very sharp looking figure. Giganta has one of the best female faces in the line and I think it’s because they nailed the paint master. Bad paint can make a properly sculpted face sour, but not this time. She looks angry and hot. The leopard print bikini is as well done in paint as it is in sculpt and really gives the figure a realistic look. 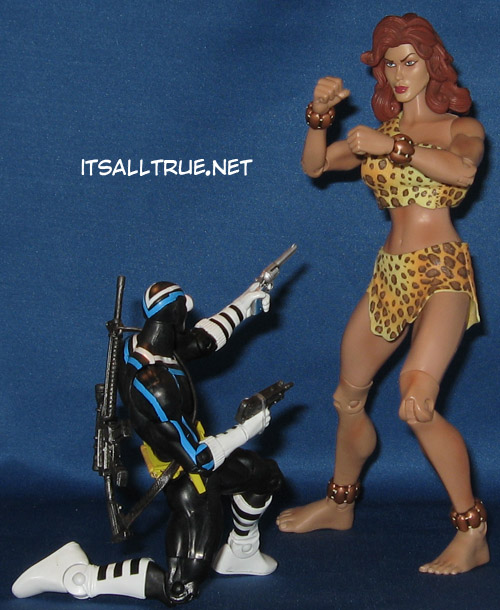 Vigilante really shines in the accessory category. He features his trademark pistol (which ended his book), a machine gun, and his rifle. All of his accessories easily fit into his hands with the triggers lining up perfectly. As an added bonus, the pistol has a holster, and the strap from the rifle can unlatch to go around the figure and clip back together. Yep, he can carry all his stuff. That never gets old on toys. And he looks great with it on his book to boot.

Giganta has an accessory, sort of. Since the Wal-Mart wave was done cheaply, it couldn’t feature the perfect Atom accessory – a mini-Atom! But where do you put an accessory of a shrinking man? With a growing woman of course! It makes sense in some strange way. Anyway, the mini-Atom is nicely done. He has no articulation, but he stands. I’ve had 6″ figures that had no artic beneath the waist and couldn’t stand to save their soul. The Atom’s face is hard to be detailed at his size, but there are bumps and valleys in the right places and the paint finishes everything off. I’m happy to have it. 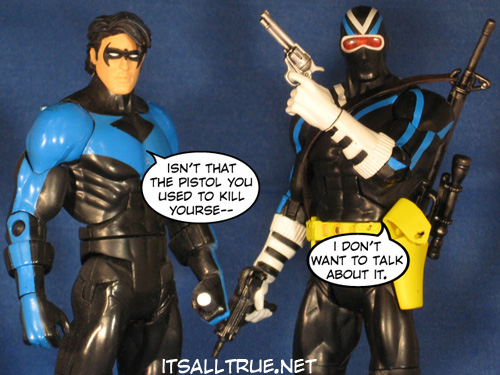 Overall, both of these figures are great pieces. Giganta adds some height and variety to the DC Classics shelf as well as bringing fans one step closer to the Legion of Doom. Vigilante is a figure you wouldn’t think you’d get, but doesn’t disappoint. If you are ever start to worry that your favorite figure isn’t coming, just look at Vigilante and remember that he made it (unless your favorite is Resurrection Man 🙁 ). While the height or obscurity of these characters might have you placing these to the back of your shelf, they are worthy of front shelf status.