Just when I thought it was safe to stop going to TRU until after Christmas… there’s another exclusive. The TRU Single line showed up unexpectedly with no announcement from Mattel, so perhaps it’s fitting that it ended similarly. The TRU Singles are cancelled, but “Renegade” Nightwing managed to squeak out.

The TRU Singles line has been a crazy ride. IAT broke the news about the TRU Exclusives way back in February when an unannounced Batman showed up at our local Toys R Us. Mattel would officially announce the next two (Hal & Cherry Barry), but kept mum on the fourth release. EBay leaks and an entry at ToysRUs.Com lead us to believe that the 4th figure would be a “Renegade” Nightwing, but then Mattel went and tossed a Tuxedo Joker (via MWCToys.Com) into the display case at SDCC making it appear as if he were the next figure. Then, Mattel said the TRU Singles were cancelled. No Joker for us. Sad day, right?

Well, it turns out we called it correctly back in July. Joker was to be thefifth figure. He’s still cancelled, but Nightwing hit stores this December before the clock ran out on the exclusive line. It’s all a little confusing and, really, we don’t understand why this subset of the line has been handled so cloak & dagger. 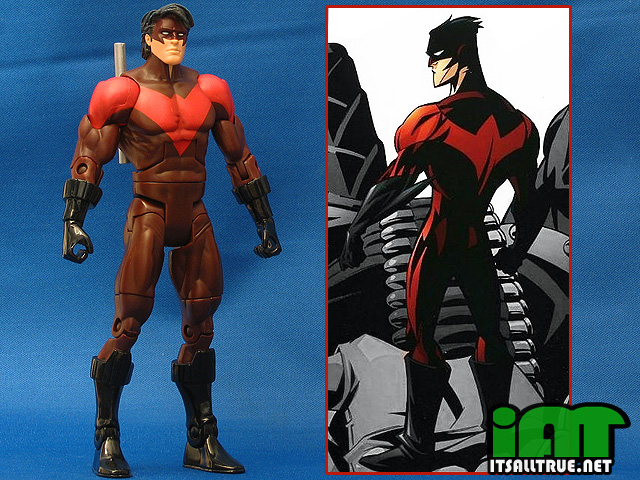 That’s still a Dick Grayson figure up there. He’s wearing a costume that appeared in a handful of issues in late 2008 / early 2009. In that storyline, readers are led to believe that Dick has switched sides and gone rogue. He allies himself with Deathstroke, takes Ravager under his wing, adopts the name Renegade, and changes his costume to the one you see here. Well, the one in the inset panel. The figure gets a few of the details wrong to stay “under budget”. The sad thing is the pieces needed to make the costume accurate already exist – the Shark’s forearms and Fate’s calves/boots would just about do the trick. The head would still be off, but the overall figure would’ve been a little closer had they been able to swap those parts in. 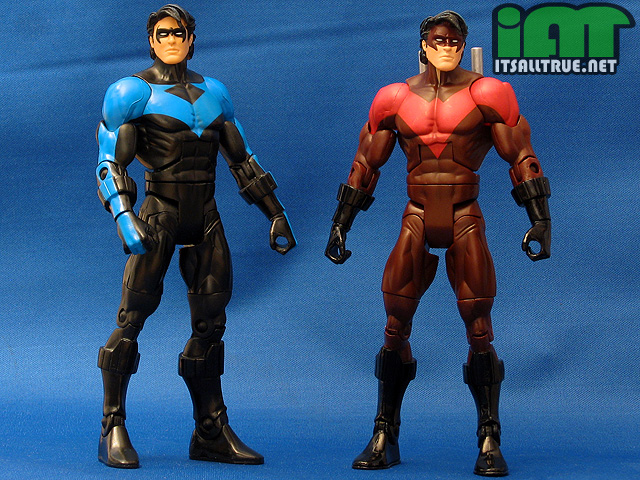 Though I ripped this guy open before snapping a picture, this version of Nightwing comes in the same All-Star packaging as the regular Nightwing (right down to the button). In fact, everything is the same except for the colors, so the success of this figure really comes down to the deco.

Truthfully, I didn’t really care about the figure ahead of time. I wasn’t that big a fan of the story and I’d pretty much forgotten about it. But, on the shelf and here at home, the figure looks great. I ended up really liking the design for the first time. Brown isn’t an oft used color in the DC pantheon and it looks great with the red symbol and black gear. The sculpted mask being painted over does cost the figure a few points, but the brown is dark enough that it almost blends outs the raised edges. One nice little touch is the painted neck. The DCUC3 Nightwing has no collar with a completely black neckpeg and it always looked a little odd to me. Renegade has a painted collar and it helps sell the look. 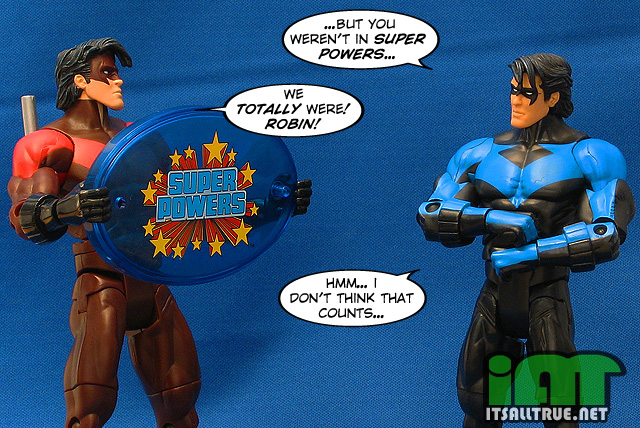 Sadly, the quality control wasn’t very good on the ones I found at TRU. There were 10 total and I would say only 3 of them had decent paint. The other seven all had problems with the mask in one way or the other – from the paint not covering the mask to dripping down and/or splattering on the face below. For a few minutes, I thought I would be going home empty-handed, but I found a couple good ones before I was done. Unfortunately, 70% of the folks buying from my TRU won’t be able to do the same.

In addition to his escrima sticks from the first release, this Nightwing comes packaged with a blue DCUC stand. Oddly, it’s a Super Powers version, but I’m happy to have it. I still love seeing that logo and I’m one of the folks that wish Mattel would produce a pack of the SP stands for MattyCollector.Com. It’d be cool to be able to give them to the other Super Powers based figures that had to go without. 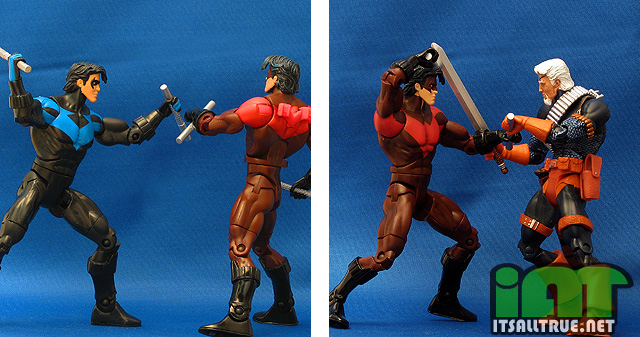 Articulation is standard for the line, but my Nightwing ended up with a mean neck joint. My original DCUC3 Nightwing has a floppy, loose head, so I’m not sure if a ‘good’ DCUC3 Nightwing had such a tight articulation point. On my Renegade, I’ve got easy downward motion, but turning side to side incurs plenty of friction. Everything else works well. 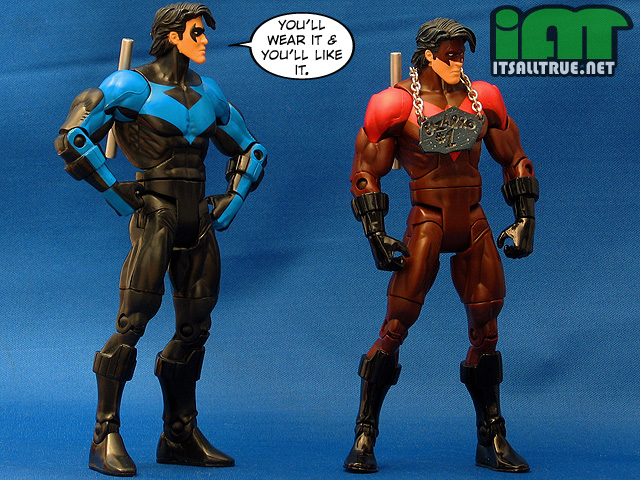 Overall, this turned out to be a nice figure with a few wrong details. I’m disappointed that the TRU Singles aren’t being continued because I think this line needs repaints like Renegade and Tuxedo Joker to be complete and they don’t need to be crammed into lines taking up the regular slots. At the same time, the line had been used for “Alex Ross” versions and I’m not going to miss those. Those seemed out of place, particularly Cherry Barry.

The Nightwing figure itself does get a little too close to JLU territory with the sculpted mask being painted over, but I’m willing to overlook that a time or two as long as it doesn’t become the norm. And while the figure is definitely one that just about no one was going to miss if it didn’t get made, it does pop when you see it on the shelf. My TRU had 10 of these when I picked it up last week and only three were there today. If you dismissed this figure when you heard about it, you might give it a second look when you see it in person.