Back in February, IAT broke the story on the Toys R Us Exclusive Batman that had magically reached retail shelves before collectors knew it existed and it was in our April 15th Q&A that Mattel let us know the TRU program would continue with new versions of Green Lantern, Flash, and a 4th unnamed figure. A metallic, Modern Hal had already been spotted on eBay and in the Attack of the Show SDCC preview, so it wasn’t hard to put two and two together. MetallaHal was on his way. 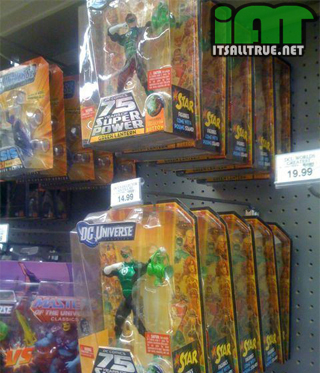 If you follow us on Twitter for in-store photos, you already know that we ran across this Hal Jordan on Wednesday. It seems that we at IAT should be wishing that TRU was a more reliable DCUC retailer since our store has been one of the first stores to receive these DCUC exclusives both times. It’d be nice if I could stumble upon other things as easily,* but it’s always nice to find something, right?

Anyway, I didn’t buy a Hal right away because I’m not sure how much I really need this particular version. I like the metallic/modern look, but the previous GLs have established a “non-metallic” theme and I don’t think Hal is so awesome that he should be the shining one in the group. Still, I wanted to review it for our DC Archive and was happy to hear that Rant had picked one up and saved me the trouble. I still might snag one. He’s cool in-hand, but I don’t know. Plus, I’m looking forward to the grey-templed Hal in the 5pk and plan for that to be my main Hal.

That’s not to say that this Hal is without his charms. The metallic finish looks really sharp when he’s not posed with other DCUC Lanterns and it is his modern costume. I love the variety of characters that DC Classics offers, but I do believe that the comprehensive DC toy line would need different versions of certain characters. I may joke about the four Hals, but a part of me is happy that we have his 60s, 70s, 80s, and modern looks. Throw a Parallax in there and Hal’s good to go. And, with Hal covered, maybe Mattel can finally get to Kyle Rayner. I want at least two of him – his classics 90s look and the new modern Corps uniform. Crabmasks for the win. 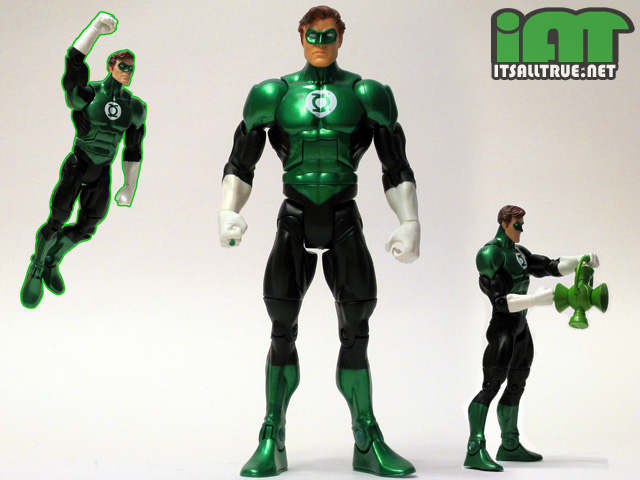 If you’ve bought a Hal Jordan before, then you know what to expect from the sculpt and articulation. Hal’s four figures have all been achieved through subtle paint details on the exact same body. I am happy to report that this is the first Hal without any quality control problems. My DCUC3 Hal is slowly rotting into white dust while my 2pk Hal is one of the worst QC figures I’ve ever owned.* This Hal has no stuck joints and all his parts are sturdy. I hope the 5pk Hal is as nicely done.

* – The store also had received a new Abin/Hal 2pk. I would have to assume the quality control would be better, but I get annoyed when I catch myself contemplating spending another $30 because the original figures were subpar. 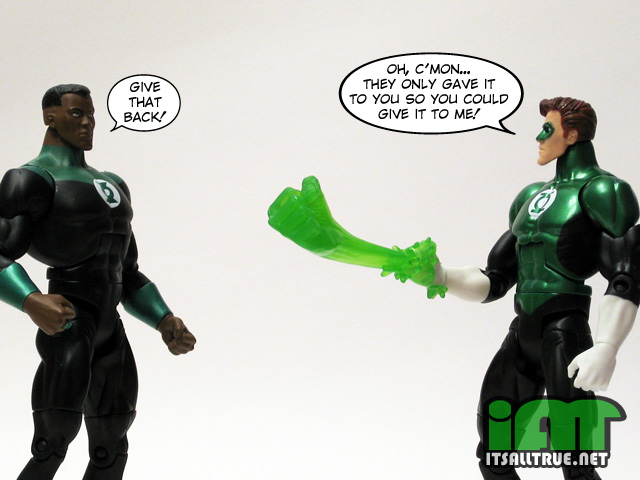 As I said above, paint is what sets this figure apart. The metallic finish looks really nice, particularly when he’s not standing with the other Lanterns and causing disharmony. I’m not sure what I want Mattel to do here. I do like the metallic look and I enjoy it on the handful of DCD rainbow Lantern’s I’ve bought too, but I think the non-metallic finish is the way to go. It looks good on the previously released figures and it’s my preference that Mattel keep that color scheme going forward. I’ll miss the metallics, but we already have Abin, Katma, John, and a C&C in Kilowog that aren’t metallic. I’ll take matching over cool anytime. Continue to Page 2…