I was reading through the latest awful issue of Justice League of America at the comic shop last week. I don’t normally bother with the book, I stay away from that writer these days, but this issue featured the Crime Syndicate, so I braved it. I’d also like to spend some money on Crime Syndicate toys too.

The CSA is not totally without representation. The original Crime Syndicate received some DC Direct figures back in 2002 and Mattel has made a few members of the Crime Syndicate across their various lines too. DC Classics, my first choice for new DC figures, has an Ultraman so far. The JLU line also features an Ultra Man as well as Superwoman and a John Stewart version of Power Ring.* To my knowledge, none of them got any love in DC Infinite Heroes line.

* – Epic fail on JLU Power Ring, by the way. The John Stewart figure looks cool and is welcome, but since the JLU Ultraman features a regular ol’ Superman head, we can construe that a JLU Silver Age Power Ring would have a… yep, a Hal Jordan head. And we can’t have that, can we…

Anyway, the CSA is generally a five member organization, so no matter what line we’re talking, we’re falling woefully short. I hear, and echo, the cries of so many collectors about “finishing teams” and in light of Mattel’s 2011 plan for themed waves in DC Classics it might be time to make some more noise about it. 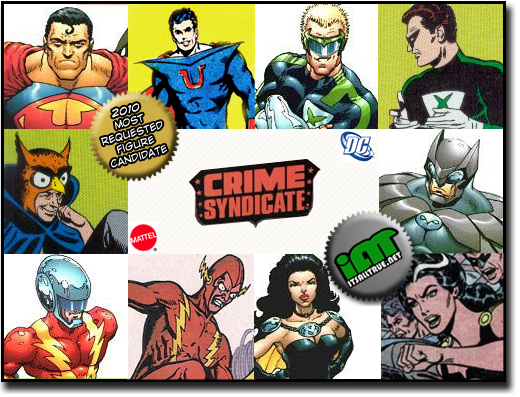 The Crime Syndicate isn’t really a complicated concept. They’re the evil doppelgangers of the Justice League from a world where everything was rather backwards. Britain declared independence from America, Columbus discovered Europe, etc. (We’re not sure how it worked either, just go with it). Anyway, the original Crime Syndicate never got a lot of back story beyond being evil duplicates…

These guys show up pretty quickly in JLA lore during one of the JLA/JSA crossovers (JLoA #29, 1964) and… don’t appear so much after that initial appearance. In fairness to them, Hal Jordan imprisoned them in a bubble stuck in inter-dimensional limbo, so let’s just say that was a very, very effective prison for a very long time. They (sometimes individually) appeared here and there over the years, but their next big appearance as a team is in the mind-stretching “Crisis on Earth-Prime” (four superteams from different Earths in four different time periods) a crossover between the Justice League of America and All-Star Squadron titles in 1982. Oh, and they have a quick cameo in Crisis where they died (it was sad). I know it doesn’t sound like much, but those JLA/JSA crossovers are often the cream of the crop when it comes to DC stories and I always knew about these guys when I was growing up.

There is, sometimes, a bit of consternation about the CSA. I think it’s largely because we’re at odds about which versions. Most collectors tend to prefer classic versions of characters to see toy form first. I think that causes a problem with the CSA because their modern versions are pretty much undeniably cooler.

Grant Morrison, who I swear read all the same stories as a kid that I did, revamped the CSA for the new millennium. There was no multiverse at the time of his JLA: Earth-2 story, so they were shown to be from the anti-matter universe instead. This story featured the same characters, but with updated biographies. Like before, Johnny Quick and Power Ring take a backseat in development to the more popular characters, but Owlman got a big upgrade.

Whether you’re a fan of the originals or the modern versions, I think we can agree that this is a team DC needs to finish in both the lines that they’ve already started it.

JLU shouldn’t be too hard. Owlman and Johnny Quick are pretty simple after you make their heads, so that’s right up the JLU alley. A proper Hal Jordan Power Ring might be out of the question because of Holiday Hal and because they already did John Stewart instead. Boo on that.

Honestly, I’d prefer to pick modern versions in DC Classics as I like their designs better, but that line has already started with the Silver Age Ultraman in last year’s 2pk, so I feel like we have a better chance at getting the original squad. I wouldn’t mind that, but I look at the modern Owlman and I can’t believe that still doesn’t have a figure.

Speaking of that Ultraman 2pk. I think it’s got a bad rap. I don’t know if it would’ve sold any better with Owlman instead of Luthor (I like that Luthor, but I appear to be in the minority on that) and Mattel wasn’t really pushing MattyCollector outside of the online collector community, so I don’t know if it’s slow sellout should be held against it.

Either way, there’s a spot reserved for the Crime Syndicate on my shelves and Mattel needs to get around to filling it out sooner rather than later, themed waves or not.

23 thoughts on “Most Requested Figures:
Crime Syndicate of America”