Our DC Universe Classics reviews keep on trucking with today’s look at OMAC! At IAT, we feel obscurity is in the eye of the beholder and if you’re us, lifelong DC fans, the line hasn’t gotten anywhere near obscurity yet. But if you’re not familiar with OMAC, fear not, we’ll cover his history along with his review.

We may joke about relative obscurity, but, truthfully, OMAC could be a candidate for one of the most obscure choices yet. He was created in 1974 by Jack Kirby in the closing months of his third stint with DC Comics. Kirby’s Demon and Fourth World titles had ended and the push was for him to create another future concept similar to Kamandi – enter OMAC, the One Man Army Corps.

OMAC was originally Buddy Blank, a random guy working a dead-end job in a corporate-dominated, future society. He’s chosen, without consent, as the candidate for the OMAC Project. This involves a sentient satellite, Brother Eye, raining energy down upon Buddy and transforming him into a soldier for the Global Peace Agency. Basically, he’s a futuristic Captain America – superstrong & invulnerable, but with a sweet mohawk instead of a shield. Oh, and throw in some crazy villains, bizarre plots, and plenty of things to make you go “hmmm”. These were Kirby stories after all. 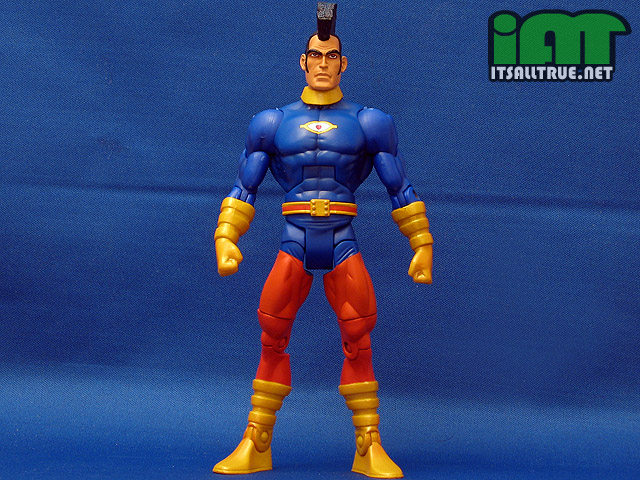 The series only lasted eight issues and, along with 10 backup features, that comprises the bulk of OMAC’s appearances. But, like many of Kirby’s creations, the notoriety of the character and the strange plots they encountered far outweighs their number of appearances. Even though this version of OMAC is not from the main DC Universe continuity, the line simply wouldn’t be complete without him.

OMAC is created with the typical DC Classics formula. He is almost entirely the standard buck (and has standard articulation because of it), but features new ribbed boots and gloves, a belt, a collar, and his trademark head complete with giant mohawk. Now, the buck system doesn’t work every time, but it’s perfect for OMAC. Some fans might’ve preferred a slightly raised symbol, but I think he looks great as is. Unfortunately, even though the buck system worked as planned, OMAC isn’t without problems. 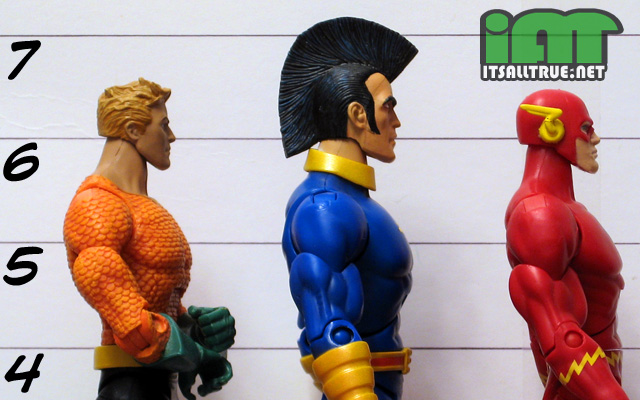 The body from the neck down is perfect. The head is perfect too (I like his stern expression), but they’re not exactly perfect together. OMAC has a big noggin’ when Kirby draws him and the figure almost gets away with having a big head too. Plenty of toys over the years have featured slightly exaggerated heads (or, like DC Classics, sometimes feature slightly undersized heads), but when you put OMAC with the other figures, that massive cranium really stands out. Here he is with Flash & Aquaman. I’ve set them against our height backdrop, but look at the overall mass too. He can almost look right sitting by himself, but on the shelf he looks a little off. 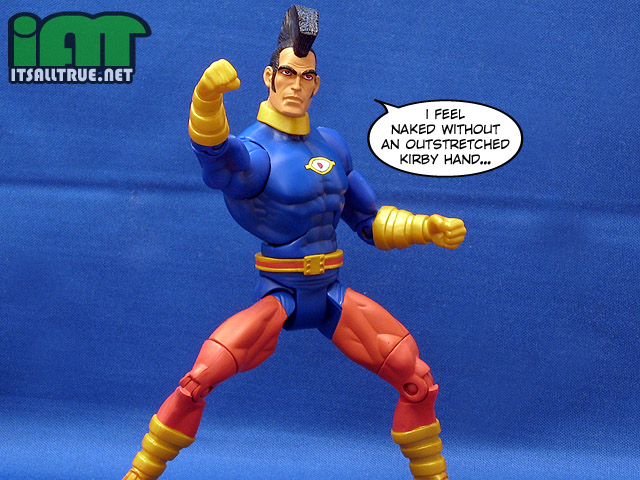 OMAC’s another one of those great figures were most things are molded the correct color to avoid issues. To get the bad out of the way first, his eyes drive me nuts. It’s not just that his right eye is smaller than his left eye (check out the QC spotlight pic below), but that he’s permanently looking up and to the left. It’s kinda funny – if you put OMAC to your left, he’s always looking up at you and seems a bit pissed. Best to keep him to your right at all times.

The rest of him is pretty sharp- the pearlized yellow is great, in particular. I could be wrong, but I don’t think we’ve seen this color/shade in the line before (Mattel usually opting for gold instead). I think it looks great here and I’m curious what other figures it could’ve helped had it been implemented earlier. The orange/red on the legs is entirely painted, but look pretty well matched despite the paint having to cover blue on the thighs and yellow on the calves. There are some uneven lines on both ends, but nothing to fret over. The tampo is exceptionally nice and clean. 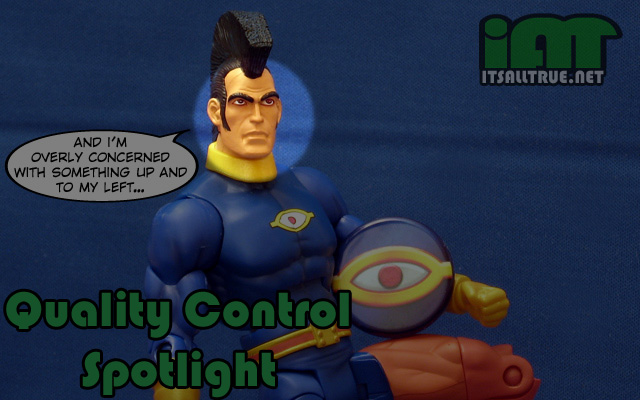 Sometimes simple is best and that’s what we have with OMAC. He’s a sharp figure with the right mix of old and new pieces and he’s going to be a standout on my shelves. The only problems I really have him with his is the eyes, the somewhat oversized head (I’ll have to be sure to stand him next to Guy Gardner) and the lack of a “Kirby hand”. You know the one – outstretched and reaching towards you as only Kirby could draw? Maybe I’m just sick of two-fisted figures, but I think it might’ve been cool to see something a little different here.

Still, OMAC is a great figure and it’s always nice to get some Kirbyness in the line. I’m excited for DCUC14 to finally hit store shelves so I can get more Kirby goodness in the form of OMAC’s grandson* Kamandi on my shelves too. 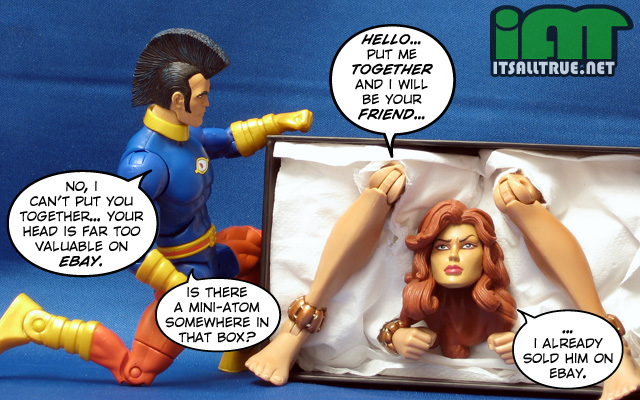 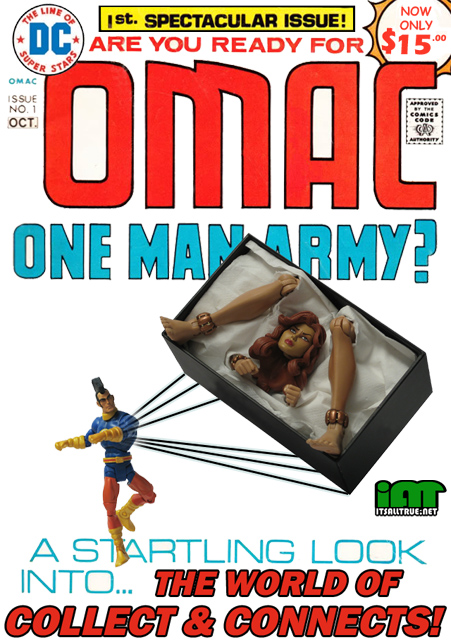