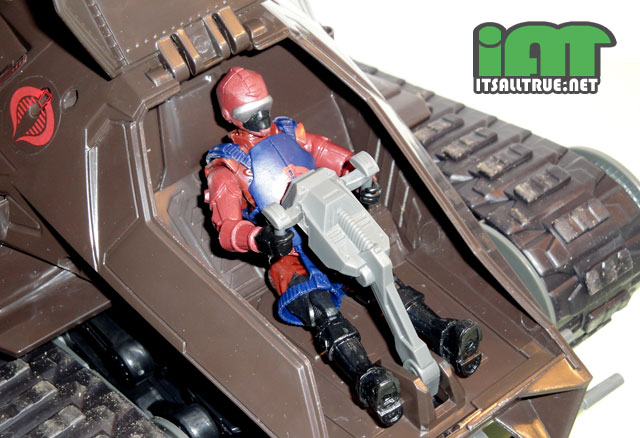 Behind the cockpit sets a large gatling gun and cannon. The cannon can fire a large red missile about three feet, which isn’t bad considering how wimpy springs usually are in firing toys nowadays. The Gatling gun also has an action feature; the barrel of the gun can spin like its being fired. There is an ammo belt that can be attached to the Gatling gun from a sculpted canister on the back of the tank, but similar to the Iron Man 2: Movie War Machine, it has a hard time staying in place. I’m going to just leave mine off; it looks better that way. Both guns can rotate, but they can also be simultaneously controlled by a small red lever that sets between them. Pushing the lever right faces the guns left and left faces the right. Pretty cool. 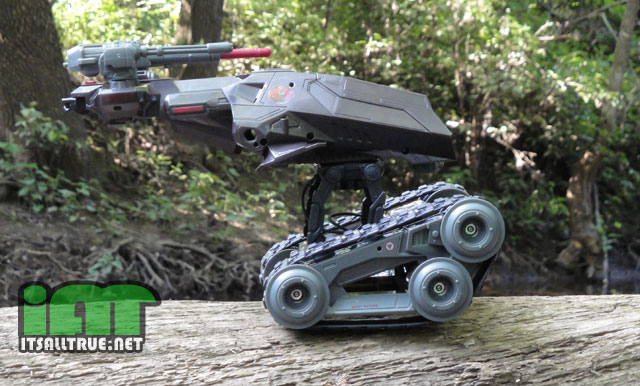 On the bottom side of the tank, is a second cockpit. This is where the gunner sits, or where the future HISS Drone can be stored. The odd thing about this seat is that the gunner is expected to sit in it upside down. There’s a roll bar, like on a roller coaster, which goes over the gunner’s head to hold him down. I can’t help but think this is one of the higher risk jobs at Cobra. There’s nothing like being trapped in the rear end of a burning HISS Tank, just underneath the heavy explosives. You know that HISS Driver isn’t coming back to let you out either. He’s high tailing it out of there before the whole thing explodes. That’s if he even survived. Hopefully there’s hazard pay involved. 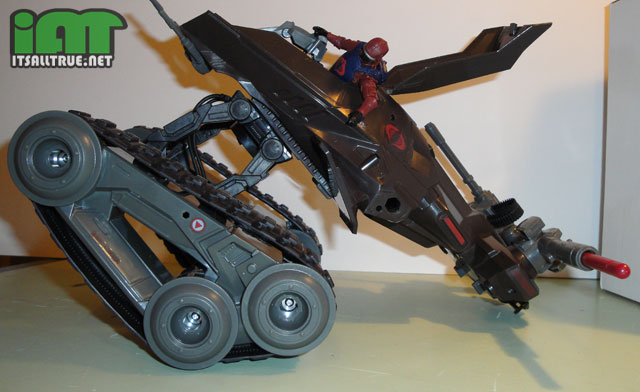 The biggest action feature of the new HISS Tank is its ability to elevate for an attack. By pressing the gray and red button between the cockpit and guns, the entire upper section lifts on four legs. In this mode, the entire cockpit and rear gun area can be rotated 360 degrees. This is a really neat feature, but it also has a couple problems. First, if you turn the cockpit around, it becomes heavy and easily falls backwards. This isn’t that big a deal, just a minor annoyance. The bigger problem, and much larger annoyance, is that you don’t have to press the button for the cockpit to pop up. Like I said, the base of the tank is very flexible, and the latch can easily become unhinged by just moving the tank around. It also becomes unlatched if you press down on the tail area when you’re playing with the guns. I’m glad it doesn’t pop up while just sitting there, but it’s still annoying that you can’t really play with it without the action feature going off. 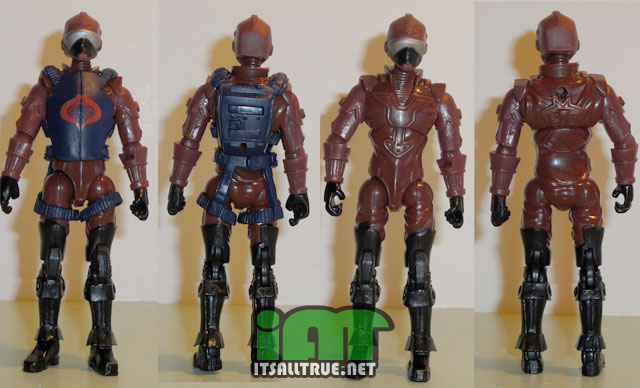 Last, we have our HISS Tank Driver. The taxi driver of Cobra, this poor guy doesn’t even get to be called a viper. This viper is built with the 25th Armored Cobra Commander body in burgundy & black, and the standard HISS Driver head. He also includes the chestplate and backpack (sans cables) of “Pilot” Destro from the Resolute 2pk. It looks like the Tailor Vipers just gave him whatever was left lying around.
To make things worse, he doesn’t even get a weapon. Sure, his job is to drive around a giant gun, but what happens when he has to get out? Like I said, he’s going to high tail it out of there. The backpack looks somewhat like a bomb though. Maybe this poor guy’s expected to go down with the ship. After all, Cobra can’t let their new weapons fall into the hands of GI Joe, can they? 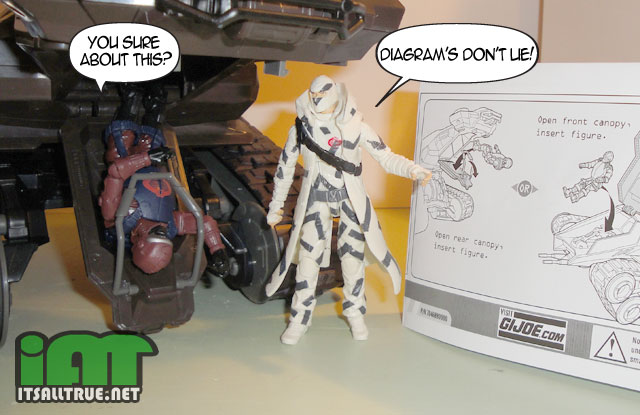 Overall, I have very mixed feeling about the new HISS Tank. It retails for about $25, which is reasonable. I love how it looks, and the action features are cool, if not somewhat unnecessary. I can deal with the cockpit popping up. I’ve learned what to do and not to do to make that happen. What really disappoints is the sticking treads though. That was the one part that excited me the most. Over time I’m sure I’ll learn to live with it, but for now I’m still a little put off.