A little over a year ago, the IAT crew trekked to Kansas City to cover the annual G.I. Joe convention, Joe Con. During the Hasbro panel, the convention room was treated to a surprise: the unveiling of the brand new H.I.S.S. Tank. After a year of waitng, I finally got a chance to purchase one.

Last week, I was wandering through Toys R Us. I was checking in on the the Transformers and Star Wars sections, both sporting new figures for the War for Cybertron and the Clone Wars, respectively. As I wandered past the old Joes, I noticed a new box, one I’d never seen before. It was the Wolf Hound, and behind it was the HISS Tank! I quickly grabbed up two of my favorite vehicles from the old line, finished up my TRU tour to make sure nothing else had come out, and headed for the checkout lanes. 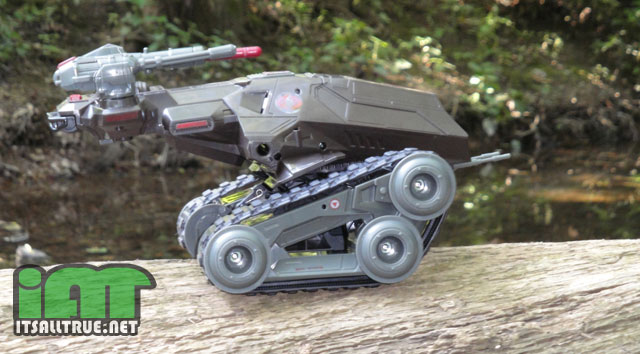 The new HISS Tank is a modernized movie version of the original. This vehicle is the driving reason behind the Pursuit of Cobra toy line. Continuing from where the movie left off, Cobra Commander and Destro escape. The Joes have also learned of various Cobra instillations around the world that are working on a new weapon. Ultimately, the Joes track this new weapon down to Cobra’s secret desert instillation, in hopes to stop its creation. But they are too late, and are forced to fight head to head against this new powerful vehicle, the HISS Tank. 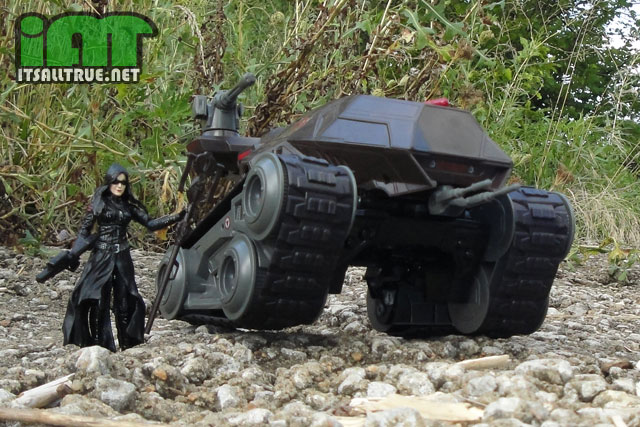 The H.I.S.S. stands for HIgh Speed Sentry, and this version lives up to its name, at least in looks. The Tank body has a nice, sleek design. It’s almost like the Cobra Engineer Vipers took the body of an experimental airplane, chopped off the wings, and mounted it on a tank. The cockpit area is angular and entirely covered in armor, giving a stealth feel. There are no windows on this bad boy, the driver and gunner sees everything with electronic monitors (stickers). Cobra’s all about the future, and there’s nothing that says 19th century more than panes of glass or clear plastic. I’m just hoping the tank has some EMP shielding, or there’s going to be a lot of crashes. The front of the cockpit also has a rotating, twin-barreled gun. 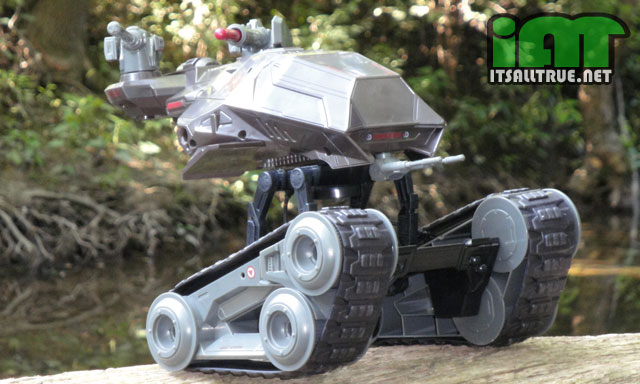 Of course, who has to worry about crashing when you’ve got giant treads to crush everything in your path? I am happy to report, that after all these years of HISS Tank toys, we now have moving treads. I was excited when I saw them at Joe Con. Finally, no more pretending the treads turned as my kid brain tried to forget about those dinky little wheels underneath. Now nothing would stand in the way of my Cobra Army’s destructive force, right? 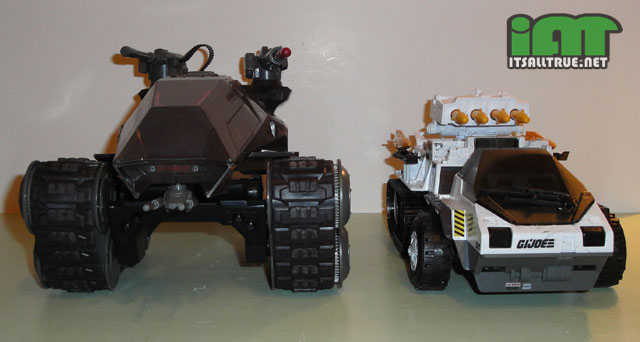 The treads themselves look great. They’re made of real rubber and stretch between the turning wheels. The problem comes in when you try and push or pull the tank. The treads tend to get stuck on the tiny “wing” area just behind the cockpit. This happens because the base of the tank is flexible. When you push or pull, you are also pushing down on the cockpit which makes it easy for the treads to get caught. Sadly, this isn’t the only problem. 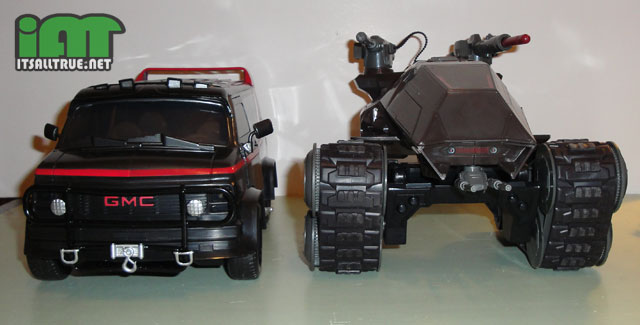 You can try to push the tank from behind, underneath, where the base is, but that doesn’t work well either. The second problem is that the rubber treads don’t work well with the plastic of the wheel frame. When pressure pushes the treads down onto the plastic, the rubber begins to catch and drag. These two materials are incompatible, unless your goal is to create massive amounts of friction. Continue to Page 2….