DC Direct has announced their newest line, based on the biweekly Brightest Day series, with a look at the first eight figures on the schedule. Here at IAT, we’re always interested in our DC toys from another mother, but this announcement includes a special figure: Our 2009 Most Requested Winner: Mera!

One of the DC Direct lines that we’ve been buying all year long is Blackest Night. We’ve padded our GL shelves with Atrocitus, Walker, Kryb, a properly scaled Sinestro, and a few others. Currently, we’re looking forward to Nekron in August, Star Sapphire Diana in November, and other upcoming releases. Now, hopefully the Brightest Day line isn’t a signal that DC Direct is wrapping up Blackest Night after wave eight. We’d like a few more of those, even as Mattel might be rolling out something similar in the Fall. But that’s all in the future. Today, were happy to take a look at the DCD’s nice big shot of the first two waves of Brightest Day figures.

Here’s the news from Alex Segura via DC’s Source Blog:

After the BLACKEST NIGHT comes the BRIGHTEST DAY, and if you’re still reeling from the amazing look of the DC DIRECT figures surrounding last year’s DCU-spanning event, you may need to sit down for this one.

Starting in March, DC DIRECT will kick off another series of high-quality and story-specific product, this time based around the hit biweekly series, BRIGHTEST DAY. We’ve got a first look at the first two waves, which include Hawkgirl, Green Arrow, Deadman, Aquaman, Hawkman, Martian Manhunter, Firestorm and Mera. 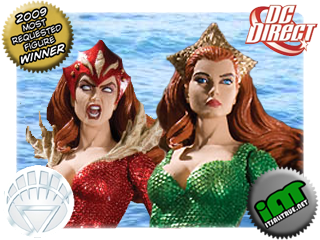 Of these, it should be no surprise that we’re most interested in Mera. She was the winner of our Reader’s Choice 2009 Most Requested Figure Poll last year. And we’re happy to report that DC Direct now has two Mera’s on the schedule. A Red Lantern Mera in November’s Blackest Night Wave 7 and now a traditional Mera that should be released sometime next Spring.

This doesn’t leave Mattel off the hook, of course, we’re still looking to them to give Mera a well-deserved place in DC Classics, but we tip our caps to DC Direct for including this fan favorite in their newest subline. Mera looks fantastic.

For long-time DC Direct collectors, these two waves alone look like they’ll really spruce up our shelves. They don’t appear to be too artist-specific and, in addition to the first-ever classic Mera figure, we’re getting our first hooded Ollie, improved editions of Aquaman, Martian Manhunter, & Deadman, and updated versions of Firestorm & the Hawks.

Let’s hope DC Direct uses this opportunity to give us our first Hawk, Dove, Reverse Flash, Jade, and Captain Boomerang, as well as updates to the Birds of Prey, Flash, and others.