This review features a false face, a robot face, a bandaged face, a translucent face, & a skull face. Not impressed? What if we told you this review only featured 3 figures? That’s right! This review features the never before seen team-up of Cyclotron & Negative Man! And we’re throwing in NM’s variant for good measure!

Lately, I’ve been breaking up the reviews and doing the character separately, first one and then the other. But I’m testing out the previous arrangement and I’m again discussing the different aspects of the figures grouped together, starting with a little bit about each character. If you have an opinion on which breakdown (by figure, or by section) you like better, let me know in the comments section below. 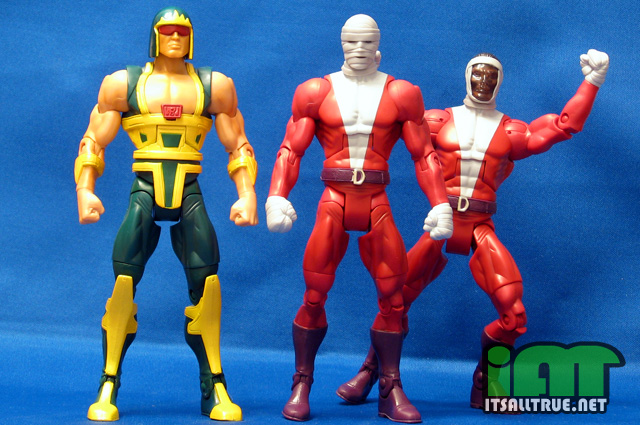 In this space, I’ve given you the back stories of some long-lived DC characters or the quick hits of relatively recent ones, but Cyclotron is neither of those things. Cyclotron was added to the DC Comics stable by Kenner in the mid-80s as part of their effort to expand their DC toy line, Super Powers. Why they did this instead of making traditional DC characters, I don’t know. Kenner did at least give Cyclotron a back story: he’s a robot encyclopedia built by Superman that contains information on every known hero and villain. He doesn’t really think for himself, but he can spin around and punch stuff should the need arise. It’s not the best origin, but that’s what happens when you let toy companies write character bios. Cyclotron did appear in the accompanying Super Powers comic, but it wasn’t the most enthralling appearance – he seemed to be there for comic relief.

Cyclotron had probably been forgotten by just about everyone but the Super Powers fans since then, but when DC Classics started paying tribute to that line so heavily I secretly hoped Mattel would be able to include Cyclotron & Golden Pharaoh. It seems like just the other day that Mattel confirmed these two could be included and now he’s already in my grubby little hands. I couldn’t be happier. I’m looking forward to Golden Pharaoh in wave 15 and I’m going to hope we see not only Samurai, but Black Lightning and Apache Chief also find their home in DC Classics. I know there are fans that would disagree with that. All I can say, is I hope you get everyone you want too. 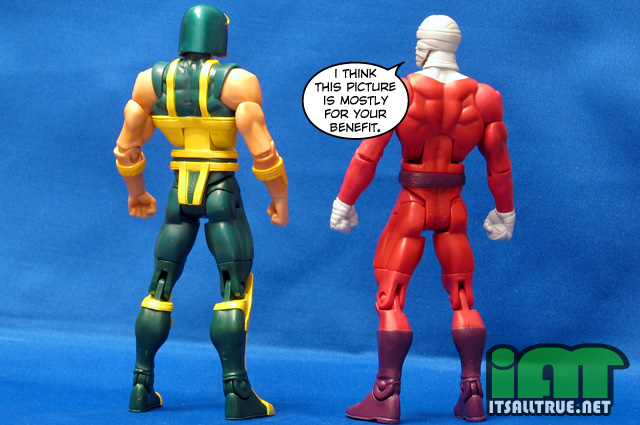 If you’re looking for a more traditional DC character, look no further than Negative Man. Negative Man first appeared in My Greatest Adventure #80 in 1963 as a founding member of the Doom Patrol. Larry Trainor was a test pilot that was inadvertently exposed to a peculiar kind of radiation while working. The radiation gave him the ability to release a shadowy ‘negative self’ from his body for a minute at a time. The accident also left him completely irradiated and required him to wear special bandages to protect others from the radiation he casts off. Like most members of the Doom Patrol, Trainor views himself as a victim and not a legitimate superhero.

The Doom Patrol’s publishing history makes for an odd assortment of back stories for each of its members, perhaps none more so than Negative Man. When the team book was first cancelled, the Doom Patrol was killed in the final issue. Since then, they’ve been killed and resurrected a few times by various writers and their various interpretations which generally ignored previous continuity. The most notable changes have been when the ‘negative self’ left Larry to inhibit Negative Woman and when it returned to Larry and combined him with a young black doctor to make a divine hermaphrodite.* 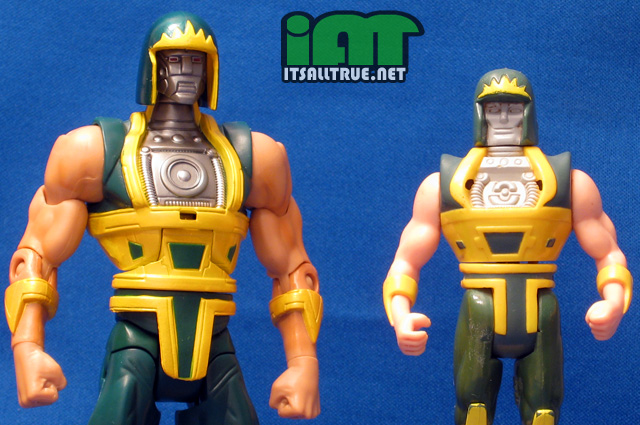 Cyclotron utilizes a standard buck, but has plenty of new parts: new feet (w/ sculpted soles – I love that!), new boots, new belt, new upper and lower torsos, new forearms, a new head, as well as the removable face and chest plates. The Four Horsemen did an excellent job updating this classic figure. They added detail where it needed it while finding simple ways to pay homage to the original sculpt. On the SP figure, do you see the two extensions coming out of the green trapezoid on his stomach? Those same extensions are included as paneling lines on the DCUC. The 4H did change up his internal parts, but I think it’s for the better. Cyclotron looks like you could update with him a CD now and his ‘a little too happy’ expression has been made more robotic.

I don’t have the face plate of my original Cyclotron anymore (it was lost in a flood), but the Four Horsemen fixed everything that was wrong with it. It was one piece (the new one is two) and lacked a neck because of it. The face was soft and round, but the 4H have given Cyclotron a more heroic face, possibly basing it on his creator, Superman (who has a penchant for making robots in his own image). In all, even if I wasn’t a fan of the Super Powers figures being in this line, I’d be happy with this figure’s sculpt.

If Cyclotron was mostly about new parts, than Larry here is an example of what can be done with just a few new pieces. Larry uses the standard buck, but has new feet & boots (I think), a new belt, new bandaged hands, a bandaged neck piece, and a new bandaged head. He may not have a ton of new pieces, but he’s comic accurate, so it’s good. There’s not much to say because these pieces are all simply bandaged versions of traditional pieces, but as a testament to the 4H thinking their sculpts through, all of these pieces are slightly larger than normal, giving the impression that they really are bandaged up.

Negative Man’s variant features a new head. I’ve been trying to stop buying all the variants because some of the last few waves haven’t had great variants. I was going to make my stand with this variant of Negative Man, but once I learned what it was, I had to have it. I had originally thought it a simple smoky/clear, partially bandaged Larry head. But underneath that translucent veneer is Larry Trainor’s skull. It’s not only a well sculpted skull, but as you’ll see on the next page, the features of the skull all sit perfectly inside the face. The veneer is glued in place – I had to pry loose two of the three tabs to be able to take a look at it. Open him up at your own risk. Continue to Paint, Articulation, and the Summation.