Click here to jump directly to the Blackest Night Checklist.

With Mattel not having access to upcoming DC events until they happen, DC Direct has been given the chance to strike when the iron is hot and produce figures much closer to what’s relevant in the current storylines then Mattel can. DC Direct is taking advantage of this with the New Krypton* (via ActionFigureInsider.Com) line and, of course, with Blackest Night.

* – I don’t even know anything about that white cloaked Superwoman, but I like the figure a lot!

If you’ve been in a coma, Blackest Night is the Green Lantern crossover that started with the first comic ever published and will keep going until it’s the last one published. Well, it seems that way, anyway. We’re up to about 90-some-odd issues/tie-ins total, though truth be told, you’re probably only going to need to read about two dozen of them to get all the important parts of the story. To boil it down even quicker, there are six more Lantern Corps now and the rainbow warriors are in a drag out battle with an eighth Corps that reanimates the dead and seeks to destroy the universe. Of course, it’s fantastically more complicated than that, and if you want to learn more, check out the Blackest Night mini-site to see where you can jump in.

Suffice to say, these new Corps have allowed for the creation of a slew of new characters in the DC Universe. One of the most popular characters has been the sole wielder of orange light, Larfleeze. 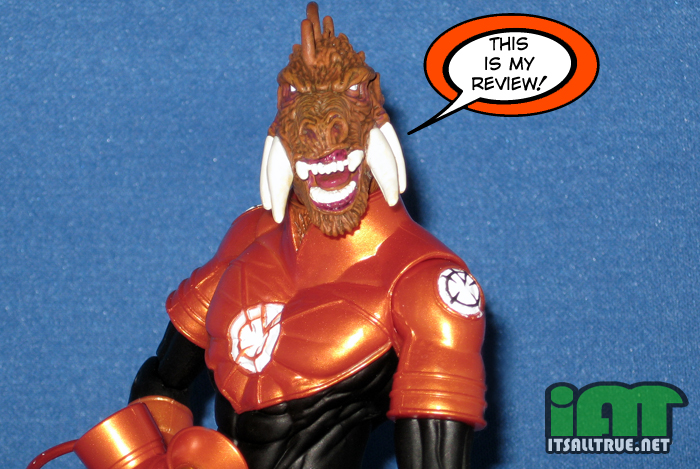 Larfleeze makes the greediest person you know look charitable. He makes the most clueless person you know look like they’re on top of things. Simply put, he’s unintentionally funny and extremely dangerous. He was introduced about two years ago and for most of that time has been the only Orange Lantern. Larfleeze’s Corps is comprised primarily of his victims. Whenever he (or one of his constructs) kills an opponent a new orange construct rises from the body and are then members of his Corps. Larfleeze himself is driven by an insatiable hunger and the desire to own everything he sees. Still, with the threat of his universe ending, Larfleeze has been sort of working alongside the other Corps against the big bad Black Lanterns. Sorta.

Larfleeze is one of the biggest reasons I’ve been buying the DC Direct Blackest Night line. Most DC Direct figures aren’t in scale with their smaller DCUC counterparts. But the oversized stature of the aliens has allowed many DC Classics collectors some wiggle room. I’ve been able to pick up most of the different patriarchs and assimilate them into my DC Classics collection with ease. I was particularly happy with Atrocitus and St. Walker from wave one. While I was let down by DC Direct dropping the ball on Indigo (check out the comparison shot of her to her solicit), I was impressed by Kryb. With wave three, I was again looking to pick up two figures – Larfleeze and Star Sapphire. I knew that Star Sapphire would likely be too big, but at this point I’m also really excited to have a full set of stands and lanterns too. I am still missing yellow (fear) and violet (love). I was hoping Sapphire (via CoolToyReview.Com) being clear would make for a good figure, but when I saw her at my comic shop, I just couldn’t buy her. Luckily, DC Direct has announced a Star Sapphire Wonder Woman (via CoolToyReview.Com) and I think I’ll be getting her to complete my set (when I get around to snagging Sinestro). Another figure that caught Vault’s attention in this wave was Arisia. She was sculpted shorter to be in-scale with the DCDs and that got her near DC Classics scale, so he picked her up (check back tomorrow for a new feature we’re going to try out). In the end, I bought only Larfleeze and appropriately, he gets this review all to himself. 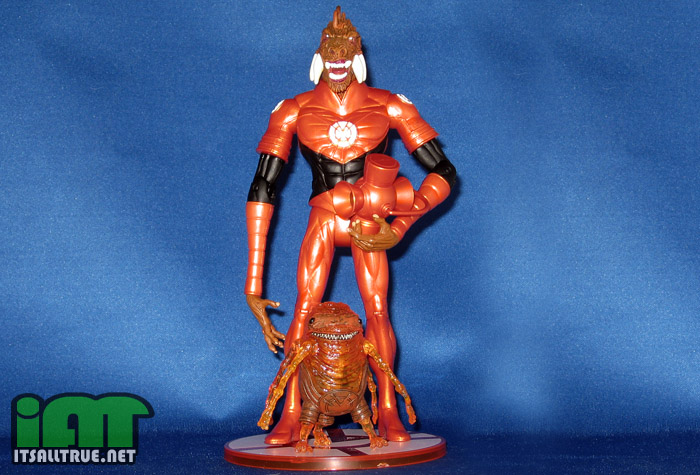 Larfleeze, like most DC Direct figures, is an all-new sculpt and out of all the Blackest Night DC Direct figures I’ve purchased, he’s the best. The pros of the other figures are there. There’s accurate detailing and piping throughout the figure, even his symbol is sculpted, the ring is sculpted on and has some detail, and the head sculpt is particularly great – though maybe not accurate. I know that Larfleeze has already been drawn a couple different ways, so I’m not sure which one to compare it back too. The tusks are the main point of contention. From what I can tell, I think it most matches Philip Tan’s art from Larfleeze’s appearance in GL #39. The tusks have changed size and placement since then, but the figure is still unmistakably Larfleeze, so I’m giving props to the head sculpt – especially with the snarl.

There were a few cons. He has visible mold lines running down all of his limbs and I’m not sure if the length of the arms is correct – he can touch his calves – because his arms are almost always wrapped around his power battery. Which is another problem for this figure.

Larfleeze was a surprise in the articulation department. I was expecting swivel neck & wrists, ball shoulders, hinge elbows, hips, and knees. One thing that everyone at IAT was concerned about were the biceps – they were going to need to swivel for him to be able to clutch his Lantern. At SDCC and in the solicit, it didn’t look like that was going to be possible. I’m happy to report the bicep swivel is there and even better – Larfleeze has a ball-jointed head! Yes, that’s right a DC Direct figure has a better neck joint than most of Mattel’s recent releases!

I did have to do a little work on the elbow joints, however. His right arm (left in the picture below) couldn’t close as tightly as his right. I cut out a tiny 1/8″ rectangle form the forearm so that his arm could close around the lantern better. Since DCD still casts white and paints the figure, I also had to paint the area black again afterwards. This cut allows both arms to reach a ninety-degree bend. He still can’t clutch the power battery to his chest, but he can hold it in a variety of poses that weren’t possible before. 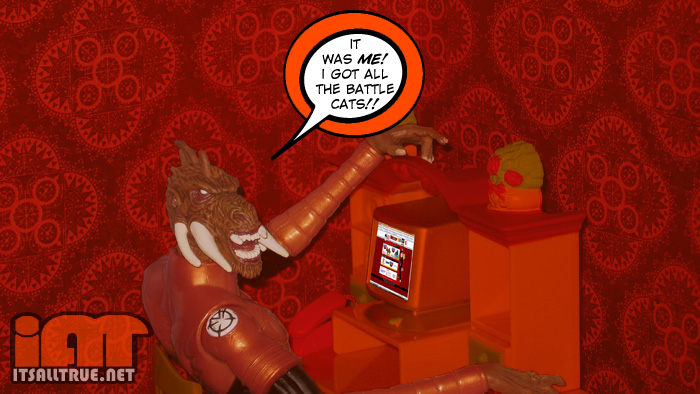 Paint continues to be the hallmark of DC Direct. It’s likely that Mattel will get to some of these Blackest Night characters next year as they’re just too popular to skip. But they won’t be metallic and they won’t look as good because of it. The metallic paint on the DCDs makes the figures pop. I still want to grab the DCD Sinestro (the awful DCUC scale helps on that one too) because of his paint scheme. Metallic paint aside, Larfleeze has three symbols painted on him and all are sharp. His head sculpt is also painted well. There is a dark pinkish gloss on the areas where the flesh is exposed and a nice dry wash for the dirty fur. 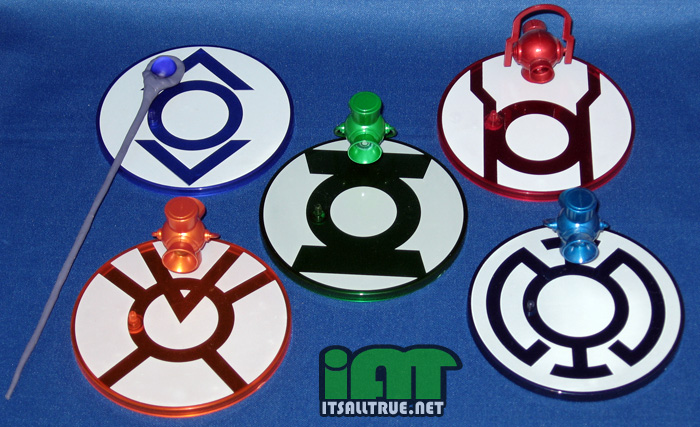 Larfleeze includes a clear orange stand with his symbol printed on it and an orange power battery. The lantern, appropriately, is a simple orange version of the standard DC Direct power battery. I know it’s silly, but I’ve been really enjoying collecting these. My only regret is that the Indigo tribe doesn’t carry a normal battery and that DC Direct botched the Indigo staff so badly. Part of me wishes that, even though it’s not canon, DCD would release an indigo battery with a figure like the Atom for the fans. While on that subject, I wouldn’t mind a black one either!

But that’s not all that came with Larfleeze. Glomulus was included as a pack-in figure. Glomulus was once a cute little garbage disposal slave that ate table scraps in an Okaaran tavern. After years of mistreatment, he rebelled and ate one of the patrons. He liked it so much that he ate all of the patrons before striking out on his own to eat whatever or whoever he wants. He ultimately runs afoul of the Orange Lantern Blume who consumes him and causes Glomulus to become an Orange Lantern himself. A nice thing on the pack-in is that he includes seven points of articulation! The three feet can call turn, and all four arms have swivel cuts. He’s molded cleared and has painted details for his Orange Lantern costume and mask. He greatly increases the value of the set, but it also makes me want more Orange Lanterns! 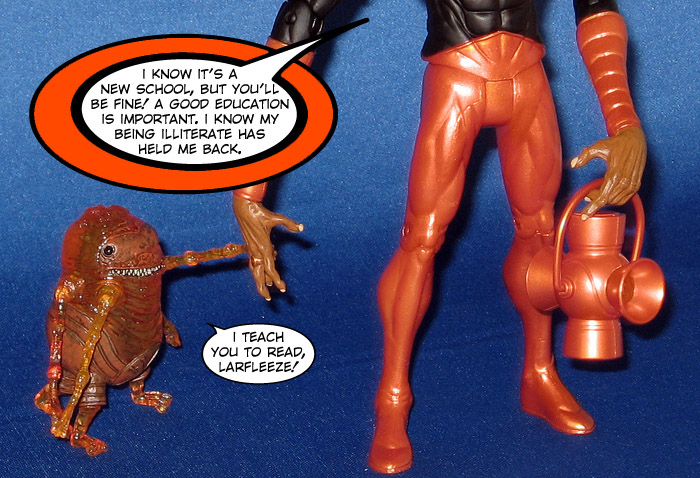 Overall, I’m happy with Larfleeze more than any other Blackest Night figure I’ve purchased so far. Vault that he could be a little more spindly or his legs longer, but I don’t think that would help the figure look better. I do wish that he could hold the Lantern to his chest, but that would’ve required a complicated shoulder joint that would have really taken away from the sculpt. I’m happy that DC Direct added the swivel biceps and ball-jointed head. I think they knew they had a hit on their hands and did their best not to disappoint. If and when the Four Horsemen get the opportunity to do Larfleeze, I know it will be great, but I don’t think I’ll be able to part with this DC Direct version. To echo Larfleeze, I’ll have to have both. 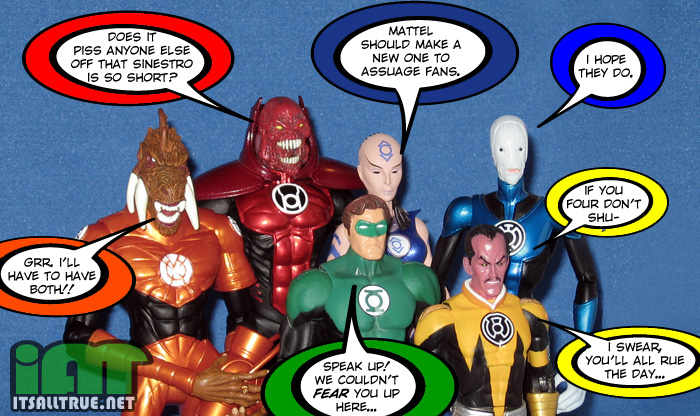