So on Day 3 of JoeCon, I finally stopped bawling my eyes out over all those gorgeous Tiger Force repaints – seriously, did you see that Tomahawk repaint? My favorite vehicle in my favorite deco? For $168? Why? Fun Pub? Why?! Sorry, it’s still too soon!

Anyway, there was some cool stuff shown at JoeCon that I’ll be able to afford thanks to two Con panels which I’ll recap out of order, starting with the Collector’s Club panel. I haven’t had a chance to review a lot of the FSS figures, but I’ve happily subscribed the first three offerings and have a ton of great figures as a result. I was curious to see who the Club would announce for 4.0! 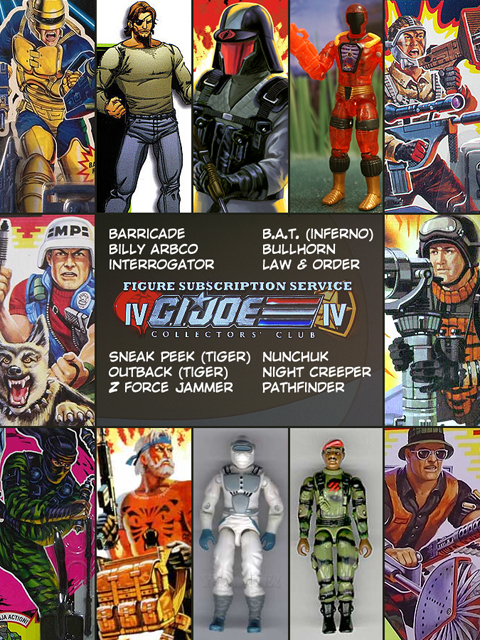 My Joe love runs pretty vintage so I’m drawn to the classics – we’ve got Barricade, Bullhorn, Nunchuk, & Pathfinder! Those are all sweet. And that last Law & Order we got? Now in Classics Colors! That’s five wins right there. The other five: the White Night Creeper, Jammer, Interrogator, Inferno BAT, and Billy Commander? They’re some great choices, but I’m not sure how many of those I’d keep. And then there is the mysterious 13th figure… We still don’t know this years, but I’m curious – the Club offered a Tiger Force Frostbite at the Con and now we’ve got Tiger Force Sneak Peek in this sub. We kinda need regular versions of those guys. Will either of them be our surprise figure?

They also announced a handful of other club exclusives (via HissTank). The big thing for me was Pythona! Sadly, I think she’s still waiting for a vintage figure, so that kinda stings. We’ll of course need all those other Cobra-La guys in modern style, won’t we? Too cool. There’s also a new vehicle next year, the Dreadnok Ground Assault 4×4 with Heartwrencher getting her first figure.

The 12″ figure is pretty cool too, an updated Mike Powers Atomic Man! He’s not glow-in-the-dark with a hazmat suit, but he’s close! And that wasn’t all. We already knew about the Marissa Fairborne figure that’s package with Afterburner, or at least a bike in his deco, but they announced their second Joe/TF figure too and it’s pretty cool. Remember Old Snake from that one TF episode? Where Magnus, Hot Rod, & crew were turned into humans by this old terrorist voiced by Chris Latta? He’s finally getting a figure! (not counting his first 53). He’ll come with Transformers Stealth Drone in a B.A.T. deco! Pretty sweet.

Now that was just the club! Hasbro also had some fun stuff to announce. Yes, Virginia, G.I. Joe isn’t dead at retail… Exclusive to TRU, we’ve got five new two-packs, four new three-packs, and some snazzy vehicles. I’m easily most excited about Gung Ho, but that Red Crocodile is a close second! Notable third place to a Night Force Hit & Run and – that Blue Bazooka? That’s kinda Night Force, right? Also, cool is a sort of reissue of one of the rarest sets in the modern era, the fifth DVD Battles Pack including Alpine!