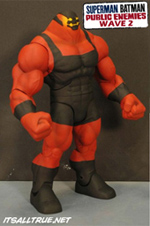 1. SilntAngl asks: We’ve got the bottom half of Brimstone sitting in our house. I’ve looked online and haven’t seen any advance reviews or packaged pics of Black Lightning and Major Force from the Public Enemies wave. Are these near to coming out, or will Brimstone’s lower half just have to go without for awhile?

Major Force, Black Lightning, and repaints of Batman and Superman will be out in wave 2 later this year. The Superman and Batman repaints will come with the same Brimstone piece as the wave 1 figures.

2. Mr. Rant asks: I liked the Goddess figure as shown at SDCC, but was disappointed when we saw the packaged sample was molded in a oddly colored translucent plastic. Are you able to discuss the reasons for this change? And can a normally painted Goddess be kept in mind for future reissues?

The translucent plastic was added to really make the figure pop and to further differentiate her from Teela which uses the same body and head sculpt. I think when you see it in person you’ll really love it! 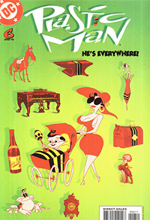 3. Manekochan asks: I’m going to drive some people nuts with this one, but is there any chance of that Mattel eagle being used one more time in Plastic Man colors as an accessory for his eventual release? He’d need a tiny pair of goggles of course.

Ha! Actually, we do have plans for the eagle, but not with Plastic Man. He may not have the eagle, but we have some really great ideas for him when we get to him!

4. Noisy asks: We’ve just wrapped up our Wave 9 and Wave 10 reviews and there are some great figures in those waves, but there was a consistent problem with the up/down movement of the head articulation – it’s gone. I believe it’s one of the most expressive joints on the figure and the recent releases are suffering it’s loss. Is this something Mattel has been working on and, if so, when can we expect future waves to return to the better articulated heads of the earlier figures?

Up and down joints will be added when appropriate for the figure. Much as Green Arrow received extra joints for his wrists to hold his bow.

5. Vault asks: I was recently fortunate enough to view the MOTU art book that a friend of mine purchased. On page 40 of the book, a design for He-Man I had never seen before was shown and I really want to know more about it. Can you or one of the Four Horsemen fill us in on the story behind this Armored He-Man?

As explained in the caption on page 41, these are prototype He-Man concepts from the Four Horsemen for the 2002 line.