Today, I thought I would take the opportunity to show off one of my DC Classics customs: Mr. Freeze in Super Powers Colors.

While Mattel has recently upped their committment to Super Powers from variants to the outright placement of Cyclotron in wave thirteen, there are some decos that I don’t expect them to go back and pick up: a brown/blue Kalibak, a blue-jacketed Penguin, and a white/purple Mr. Freeze. That in mind, I set out to make them in on my own.

Since Penguin wasn’t really a challenge and Kalibak’s on the pricey side, I went in websearch of the no-goggles version of Mr. Freeze from Mattel’s Batman line. The figure does have less articulation (making customization a tad easier), but it is the only the version that could get close to being accurate to the original.

Once the figure arrived, it was just a matter of a little disassembly (to get at the head) and liberal use of acrylics. Unfortunately, getting into the guts of the figure proved a little difficult and I did lose the head-turning action feature, but it’s not missed in the final product.

One thing that made the figure a real challenge was the amount of detail the Four Horsemen packed into the sculpt. While the original Mattel deco ignored a lot of that detail, I was able to use it to bring the figure to life. I was really happy with the finished look, but I’ll let the pictures tell the rest of the story. If you have any questions, please feel free to ask in the comments section below! 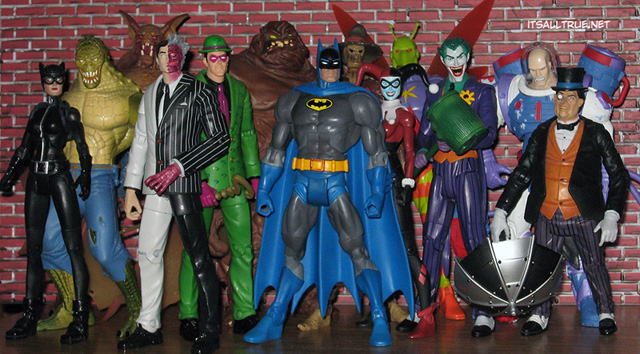