It’s been awhile since my last Marvel Universe review. Truth is, MU and I seem to have had a falling out. Space, budgeting, the return of Marvel Legends, & just finding the damn things have all affected my MU purchases of late. I haven’t bought many, but I did need the SDCC Exclusive Masters of Evil 3pk.

With NYCC around the corner, I do note the irony in doing a SDCC exclusive review. Hopefully you will all forgive me! Part of the delay in the review kinda goes hand-in-hand with my enthusiasm for collecting the line. There is my internal conflict between collecting a 6” and a 4” line at the same time, but the Avengers line seems to have eaten up all the local peg space for MU. I’d love to have Beta Ray Bill, She-Hulk, FF Spidey, and the chance to consider the new Hulk, Kang, and some of the others – but the local stores pretty much have me on ice. It’s either pegfulls of white Iron Fist or no pegs at all round these parts. But I digress… 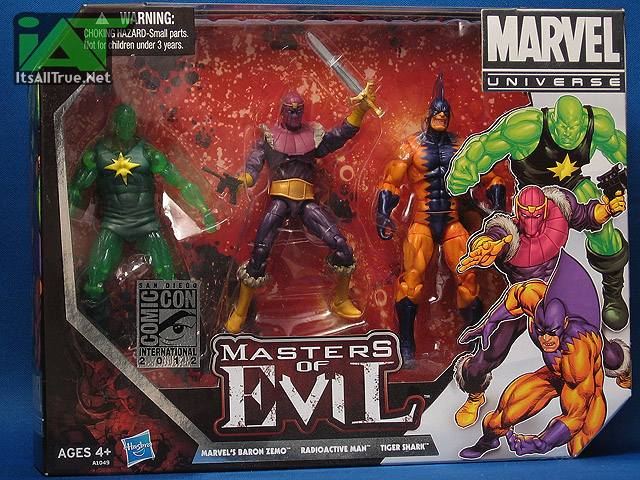 Since I’m a little more caught up on the stuff I normally cover, I wanted to jump back to this SDCC set before it was obscenely late. I said in the teaser that I really wanted this set – that’s partially true. I really wanted one of the figures, kinda wanted another, and then really didn’t care about the third. That’s the nature of a good multi-pack though. I don’t mind being “forced” to give some time to a character/figure I might not have otherwise bought.

If you guessed that the must-have figure for me was… the Radioactive Man, you were right! I know that may sound odd, but if there is one thing that MU has simply outclassed ML on, it’s the Thor Rogue’s Gallery. I’m still disappointed the Thor movie didn’t deliver any comic-based merch (Odin, Sif, Heimdall), but Marvel Universe has been great for Thor villains including the Wrecking Crew, the Enchantress, three versions of Absorbing Man, a classic Loki, a Frost Giant, and now the Radioactive Man. It is awesomeness that I would love to see translated to 6” (I’d buy them all again), but it’s also one of ways that MU will always have some hooks in me – Executioner, Grey Gargoyle, Mister Hyde, Cobra, and that orange Fin Fang Foom please! 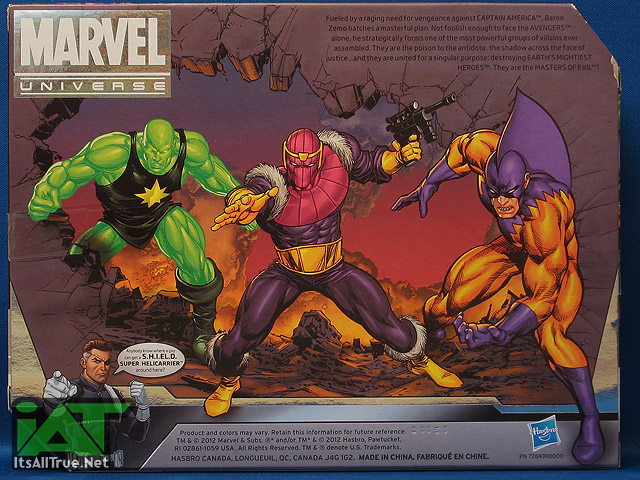 So, yes the Radioactive Man is my must have for the set. He’s a Lee & Kirby original that first appeared nearly fifty years ago in 1963. After Thor run afoul of the Chinese government, nuclear physicist Chen Lu was given the task of finding a way to defeat Thor. His plan? He irradiated himself in larger and larger doses until he become a living (that’s the important part) radioactive man. Did I mention he’s translucent green? My heart melts.

Radioactive Man the figure is recreated here in his translucent green glory and is executed well despite the parts reuse. He features the basic oversized body (used on most of the Wrecking Crew) cast in clear green plastic with a reused head and a new… toga to get the job done. I thought the head might be new at first, but even with the details getting a little lost in the unpainted plastic, I’m pretty sure those are Professor X’s eyebrows in there. The toga restricts the articulation somewhat, but the figure still has good poseability and looks sharp along the way. Just don’t peak under the toga of the Radioactive Man. You’ll burn your eyes out. 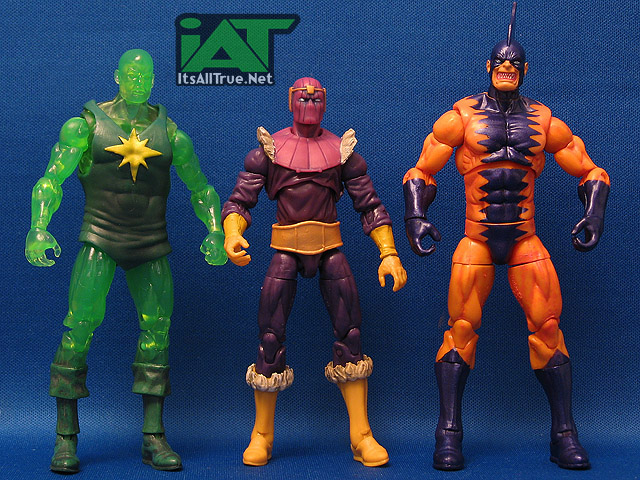 After I was done with my Radioactive Man, I turned my attention back to the other figures. Being a DC fan (I’m retired nowadays), I didn’t really know anything about Tiger Shark. I still don’t know much – Tiger Shark was a paraplegic who had his DNA bonded with Namor so he could regain the ability to walk & swim, but the crazy scientist also threw in some Tiger Shark DNA (why not?) and our angry & predatory friend here came about. 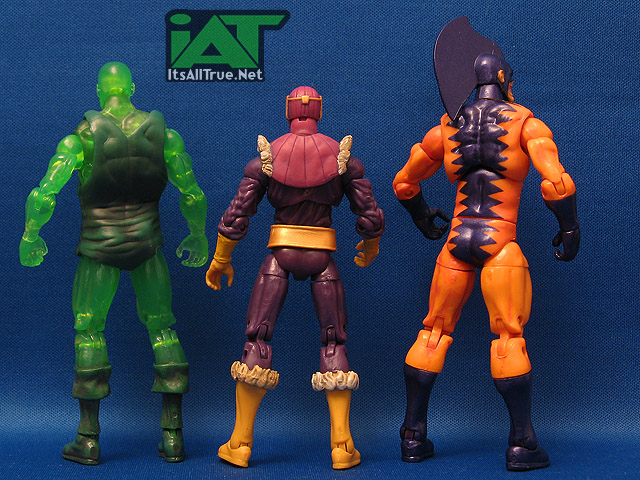 While the character doesn’t do much for me, I do have to say that the figure is impressive. Tiger Shark uses the Cable body. The figure is overall bulkier, perhaps too big for some characters, but the articulation that’s been added (waist swivel, thigh & boot swivels, and those swanky ball-jointed ankles) make this one of my favorite bucks in the line. The hips are still annoying, but all the new pieces make him a joy to pose. He makes me jealous that Radioactive Man couldn’t benefit from this new body as a matter of fact. Continue to Page 2…