The Four Horsemen’s Dark & Light Talisman Scarabus figures will go on sale this Saturday at Store Horsemen. They’ve sent along all the info you need as well as a look at what makes this run unique. Plus, we figured this would be a good time to unveil our newest IAT checklist: Four Horsemen Properties!

The Dark & Light Talisman Scarabus figures to be sold through Store Horsemen are virtually the same as the figures sold at their current Toypocalypse: A Four Horsemen Retrospective gallery show except for one significant difference the outside of the blister packaging for each figure will feature an attached, individually hand cast and gold painted Scarabus Talisman disc.

Regular edition Scarabus pre-orders are expected to begin in early March, and it still remains to be seen whether all of the Scarabus variants will be sold through Store Horsemen, or if various retailer partners will once again join with the Four Horsemen in the sales and distribution of these figures.

Keep watching the Four Horsemen’s website for all news and updates about Scarabus and all things Four Horsemen.

Got that? This Saturday. Tomorrow night. 9pm EST. 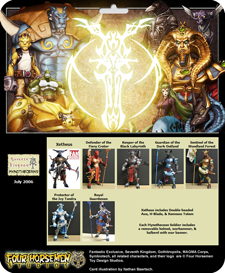 While we’re talking about the Four Horsemen and Scarabus, we thought we should show off our newest IAT cardback checklist. This one is based on everybody’s favorite sculptors: The Four Horsemen! This visual guide features the amazing artwork of Nate Baertsch & includes all the figures from the three Four Horsmen Toy Studio properties that have made into plastic so far: M.A.G.M.A. Corps, 7th Kingdom, & Gothitropolis. Accessory lists and release dates are included and you can click on the images for larger versions.

Continue to the Four Horsemen Checklist