When we got back from our New Year’s vacation, my wife and I found a small mountain of boxes waiting – a “few” toys had arrived. Among them, was an Armodoc & a Rig from Onell Design. With my review backlog cleared up, I’m happy to finally be able to take a look at these two toys (just in time for the next drop!)

If you’re looking for info on tonight’s Glyos drop, click here to jump to it.

While I’ve become a Glyos convert, this review marks the first time that I’ve picked up anything larger than a Gobon. I don’t know if it was simply my being late to the party, the price, the vinyl, or the limited availability, but I just hadn’t ordered any of the bigger stuff. Clearly, that was a mistake.

While both of these clear editions are new, released in December’s Henshin wave, the sculpts are a fair bit older. The Armodoc debuted at SDCC in July 2009 while the Rig appeared first a year later at SDCC 2010. I wasn’t collecting Glyos at the time of the first Armodoc, but I was when the Rig debuted, and I just wasn’t able to get it on it! That said, I happily snapped up the clear one for the Henshin release.

Since the Armodoc is the elder brother here, I’ll start with him. First, the technicals – he’s about 5″ tall and is compromised of eleven pieces with 10 points of articulation. I’ve actually been able to get a lot of mileage out of the simple cut joints – many of them are at an angle, allowing for more range.

Since he’s mostly unpainted, my impressions of him really relied on the sculpt. The surprising thing about that is, even though it’s relatively simple, it really conveys an attitude. He looks… well, my wife says he looks cute, but I think he looks like a tough little dude. As just an Armodoc, I ended up liking him quite a bit more than I thought I would and I’m definitely in the market for another. I’m just waiting to see him in a color scheme that really speaks to me.

I may have never mentioned this at IAT before, but I love Robocop. I don’t have any illusions about the quality of the movies and I’m sure showing the original movie to a 7yr old would be frowned upon in this day & age, but it was pretty awesome at the time. Anyway, I’d be lying if I didn’t say that I enjoyed the Rig because he bears a general resemblance to one of the greatest droids of all time, ED-209.

The Rig is about 4″ tall and features only three points of articulation; the shoulders and waist. Don’t let that fool you though. While the Armodoc has a very straightforward build like a Pheyden or Exellis, the Rig is more like a Buildman. There’s a lot of surface detail to his sculpt and you can get so much out of just by looking at him from different angles. It’s ridiculous. While I prefer him in that upright, ED-209 pose, just laying him down and/or spinning around the “arms” and “upper torso” can make him into different things: battle suits, tanks, spaceships, etc. Continue to Page 2…

Of course, the true brilliance of these figures doesn’t always come out when you buy just one and sit it there. It comes out when you start swapping pieces.

Earlier, I mentioned there’d be a few nitpicks and this is where they are. The parts didn’t always pop on and off as easily as I would’ve like. The Armodoc doesn’t always want to have the pieces come apart. I appreciate that he’s a more solid toy than the Rig, but this is the one drawback to that. You can break him into his components; it’s just going to take a little more elbow grease than you might be used to with a Buildman or Pheyden. Since the Rig is a little softer, he has the opposite problem. His pieces tend to give before they want to attach to each other. This has an easier workaround though. If you hook the lip into the cavity and spin it around while applying pressure, the piece will eventually pop into place.

It’s not a dealbreaker and, once you get the hang of it, the real fun begins. The pieces of these two larger scale figures are interchangeable and I’m told (but haven’t tried) that there are ways to get regular Glyos to connect into these guys using Gobon blasters too. I had a blast making new vehicles/bases for my “Bubblegum” Sarvos in these pics and I’ve reconfigured ’em even more a time or two since. And, as always seem to be the case when I buy Glyos, I find that I hate having just one.

Overall, these are two more great additions to my ever growing Glyos army. I knew I’d love the Rig, but the Armodoc really surprised me. I love the clear (seeing the Glyos riders is awesome), but they do leave me looking forward to picking up some fully colored versions of these guys to so I can better appreciate their sculpts. And while we’re talking about buying some new Glyos, let’s move right along to today’s drop. 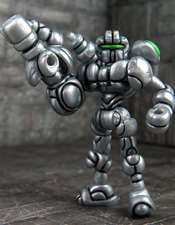 Henshin Wave 2 is set to launch tonight at 9pm EST. If you head over to the Glyos Web Log you can see a complete list of what’s being offered. If you’d like to have a Rig at your house, tonight’s got a special treat – a Glow in the Dark version (it’s really sweet and I hear the joints are easier to pop in and out). And if you’re an OSM fan, you should probably give his drop a looksee too since many of the colors featured are compatible with some of the exclusive OSM releases.

Anyway, head over to the Onell store tonight at 9pm EST for your latest Glyos fix!