For a line based on Green Lanterns, it’s kinda funny that the first wave included only one. And an interesting one at that, with five Hals, 2 Johns, and 1 Guy already in the line, it was Kyle Rayner’s turn. The modern costume wouldn’t have been my first choice, but at least there’s crabmask.

Kyle Rayner came into comics in one of the worst ways possible – replacing a beloved character. Hal Jordan, driven mad by the corrupting power of Parallax, decimated the Corps and sucked the Central Battery on Oa dry. The last surviving guardian, Ganthet, travelled to Earth and bestowed the last Green Lantern ring on freelance artist Kyle Rayner. Kyle’s had to come into his own over the years – his default story was “rookie” for the longest time, his girlfriends tended to die (& some came back), and he did say “Whoa” and “Oh, man” more times than I could count.

But I loved it. I loved his early adventures, I really loved his Morrison JLA appearances, and I was happy to see him “grow up” as a character during the Ion storyarc. Things haven’t been quite as good since though. Jim Lee gave him a horrible costume revamp. Judd Winick as the series writer was a low point. And then Geoff Johns turned back the clock with Green Lantern: Rebirth. The last few years have been great for Green Lantern fans. They’ve been great for Hal Jordan fans. But not so much for Kyle fans. Kyle’s got a spot in Green Lantern Corps, but there would be months – during the middle of Blackest Night, no less – where we saw him shaving. Or washing his hands. Or painting a mural of other GL’s exploits. Hal Jordan was saving the universe while Kyle was taking a shower. That was lame. GLC has a new writer, Tony Bedard, and things have been good for Kyle so far. For the first time in a few years, I’m looking forward to his next appearance again. 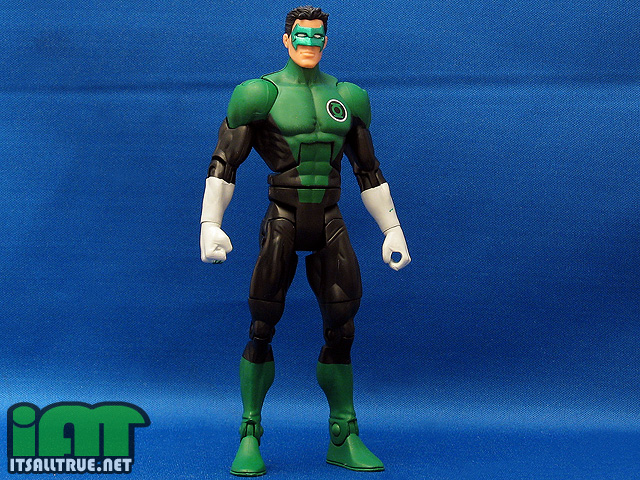 Kyle required almost no new pieces. He uses the standard buck except for his ring hand and his head. The ring hand gives Kyle his unique GL ring (though it’s similar to John Stewart’s these days). The signature piece is the new head and the crab mask has never looked better. Previous DC Direct attempts either didn’t give Kyle room for his nose or sculpted the mask differently to accommodate the nose, but the 4H worked out a great balance for this sculpt. The hair is nicely done and it almost fools you into thinking it’s a separate piece. 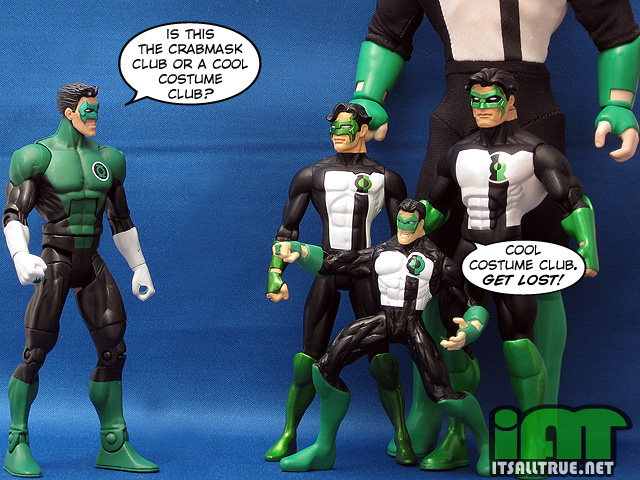 The paint work on Kyle was nice, but mine had a few problems. You can see the green scuff marks on his left glove in the photos, but there were also some rough lines where the green paint stops throughout the figure. The tampo looks great and the use of metallic paint for his metal crabmask and ring really makes the figure stand out, even among the Green Lanterns. I still wish we had gotten the original costume, but I like the modern one for homaging the original. The crabmask and off-center symbol are reminiscent of 90s costume enough that I enjoy them in GLC and on this figure. 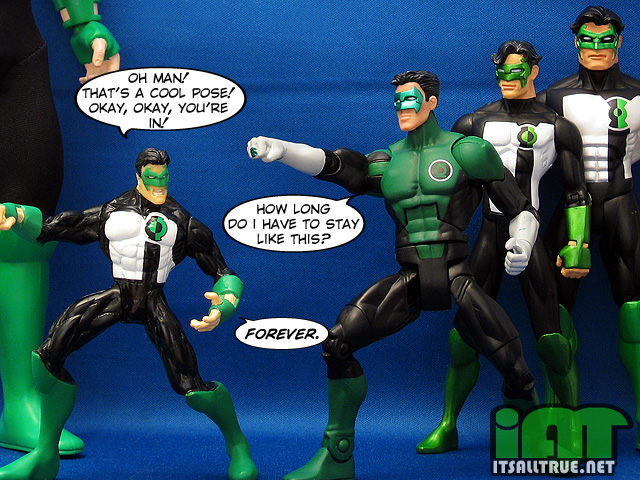 Kyle has the articulation you’ve come to expect because he’s on a standard buck. I’m a little annoyed about that. You’ll see this more in the upcoming Black Lantern review (featuring Black Hand & Amon Sur), because they’re getting more play despite the fact that I don’t care about those characters. Why? It’s because they have added articulation. I’m happy with the regular level of articulation, but Mattel talks about adding articulation where necessary. Well, all Green Lanterns should have ball wrists (none do). Kyle’s awesome, but he would be even better with some of the improved articulation seen on other figures in the same wave. 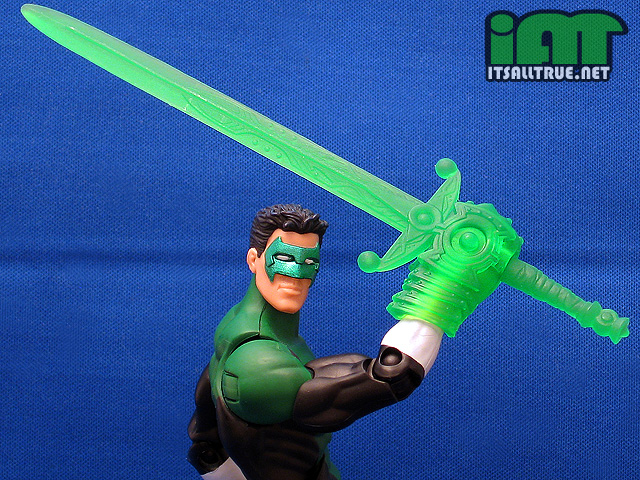 Kyle comes with two accessories: a giant sword construct and his power battery. The sword construct is particularly awesome. The 4H have done a great job on the constructs in this line and Kyle’s is no exception. The giant glove and ornate sword scream Kyle to me and it’s easily my favorite construct so far.

His lantern is almost awesome. It’s sculpted a little wider than I’d like, but I have no doubt the Four Horsemen have seen it this way in the comics over the last twenty or so years since Kyle debuted. It really only looks wide from the back anyway. Speaking of the back…

Typically, the “CHINA” stamp isn’t put on the front of something and I think there was some confusion somewhere along the line about which side was front and which one was back. You can find images of Kyle recharging his ring from the back of the lantern which may add to this confusion, but it’s much more common to find it depicted with the flatter side being the front. It’s not really a big deal, but the little “China” imprint is an annoyance. 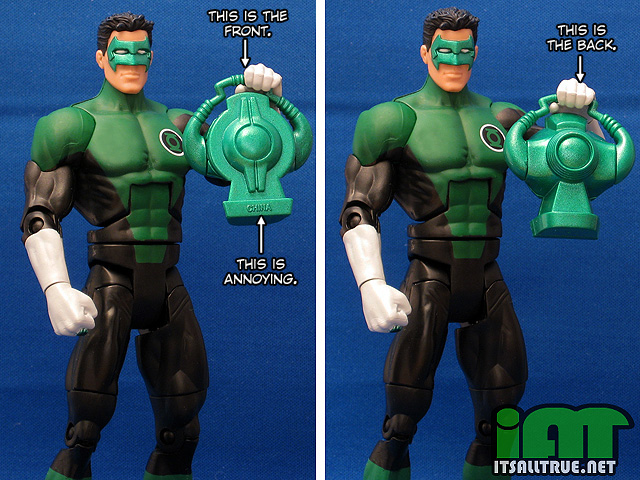 Overall, I couldn’t be happier to get Kyle in this line. He ended with a solid figure with great articulation (yeah, I’d like “more”, but the DCUC model ain’t exactly bad), some nice new pieces, and cool accessories. I could’ve used some better paints on my Kyle figure, but nothing on him is that outrageous. Kyle looks great with the Lantern Corps and that’s one of the benefits of this costume – it’s the one that belongs on a shelf with the other corpsman. I still want Kyle in his iconic 90s look though. We need more Morrison JLA… 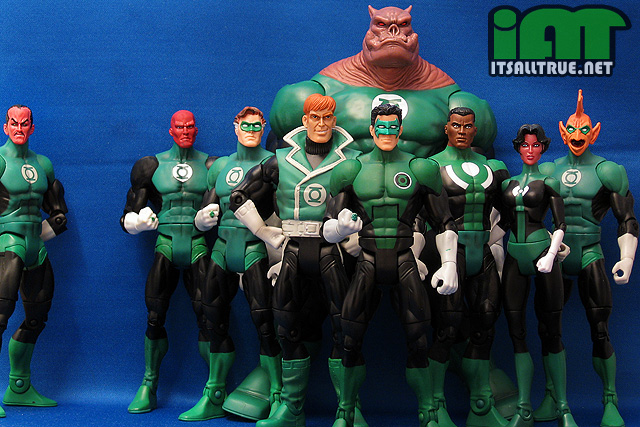