November just wasn’t festive enough for Christmas toys so I decided to hold back this review until a little closer Christmas. It’s been difficult because I like this figure almost as much as the original. So, with Christmas just a few days away, here’s Sci-Fi Revoltech No. 17: Jack Skellington in Santa Suit.

I like The Nightmare Before Christmas, but I’m not a crazy fan. I don’t own every version of every character ever made, but Revoltech’s Sci-Fi line did such a good job with the original Jack that I just couldn’t help being tempted by the Santa version. I think I might have gotten away without pre-ordering it until I clicked on the picture that contained his accessories. It just goes to show if you see something that may be tempting, don’t keep looking at it. Just run the other way. 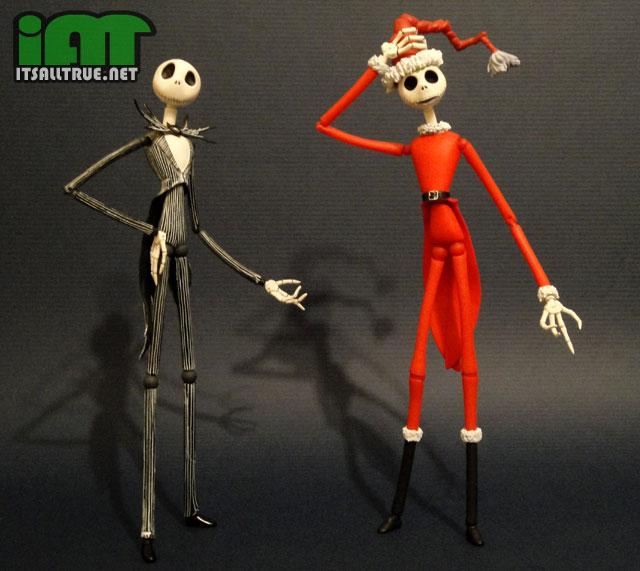 In many ways Santa Jack is very similar to the original. In fact, when I first saw the pictures I thought he was just a repaint. He’s the same size and he has almost all the same joints, but I can assure you that he’s no repaint. The Revoltech folks have just done such a wonderful job fabricating this figure that it literally looks like the original one just changed clothes. 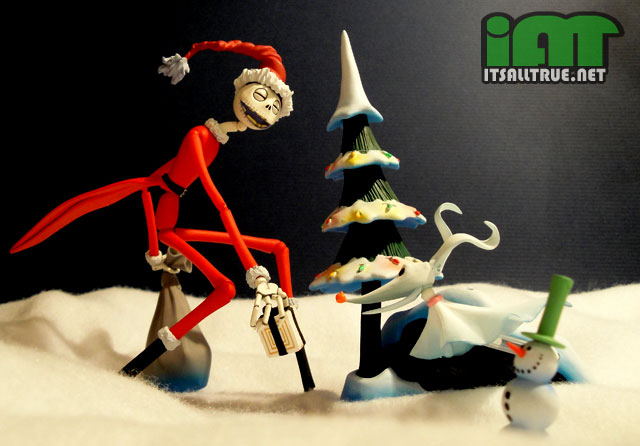 Where Jack’s original figure had an overabundance on the sculpted details to his suit, Santa Jack’s costume is very minimalist. Gone are the sculpted pinstripes and tattered tails. Jack’s Santa suit is entirely smooth with a sculpted belt and fur lining his color, wrists, and boot tops. But it’s the subtleties of the sculpt that impress me the most. Looking at the two figures side by side you’ll notice that his Santa suit sits on his frame in a slightly different fashion. It’s slightly bulkier on his upper body and cinches off at the belt. Another very tiny detail that I love is that his shoes are different. Original Jack has smooth and shiny dress shoes with a slight heel, while Santa Jack has boots with a slight wrinkle in the texture and no heel.

Santa Jack’s paint job is also very basic. Most of his pieces are molded the color they need to be with the exception of a few areas like his belt and face. Something I really liked was that the white fur trim of his costume has a light touch of gray added. It really gives these sculpted patches of fluff an extra layer of detail. 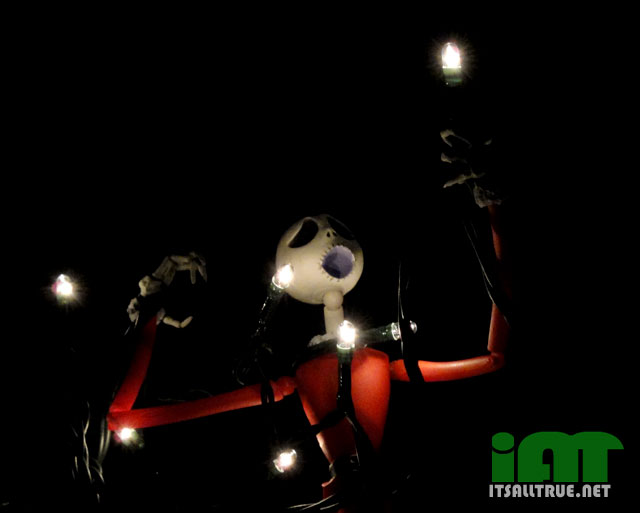 Santa Jack’s head, shoulders, waist, hips, knees, and ankles are all revolver joints. While his elbows and wrists are hinges. Interestingly, the original Jack had a revolver joint where the head meets the neck and where the neck meets the body. They left out the neck/body joint on Santa Jack, leaving him with just the head/neck joint. His neck is also angled forward slightly, where the original’s was straight. I’m pretty sure they did this so his Santa beard would be able to hang down and not be pushed forward by his chest. But even with the lack of this one joint, the figure is still very poseable. 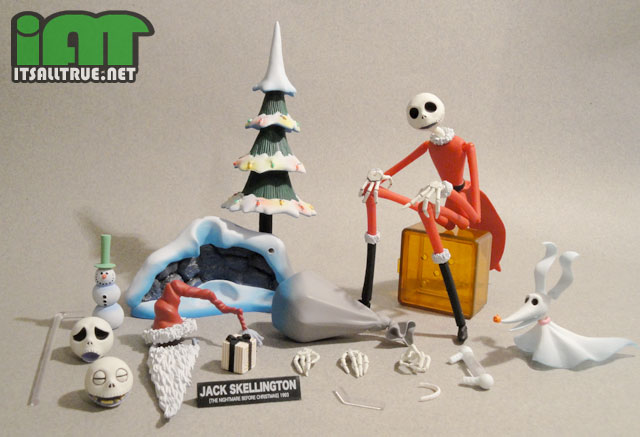 Now this Jack figure is good, but it’s his accessories that are the real icing on the cake and what got me to buy him. Up first are his extra body parts. Santa Jack comes with three new heads. One head has a slightly opened smiling mouth, another is laughing with his eyes closed, and the last is either singing or enraptured by something. This Jack also comes with five extra hands. Three of them are from the original Jack. But he has two new ones that are in a clutching motion, making it easier for him to hold things. The best thing about these new pieces is that they are all interchangeable with the original. So if you bought the first Jack, this gives you a total of eight heads and seven hands for either Jack figure to use. Continue to Page Two….