We’re closing out our Green Lantern Classics reviews this week with a look at the wave’s armybuilder, the Manhunter. I have no love for the concept of the Manhunters, the figure’s rather bland, and you’re probably going to be wondering why I actually bought two Manhunters by the end of the review.

I’m going to start off like I normally do, with a brief history of the character, but I should be upfront about one thing. I think the Manhunters are awful. I’m a big fan of Steve Englehart’s run on Justice League of America (where the Manhunters first appeared in 1977), but he retconned these robotic precursors into the GL mythos and I really wish he hadn’t.* And not just because they keep going “no man escapes the Manhunters” over and over.

* – Actually, while Green Lantern is one of my favorite corners of the DCU, there is seemingly no end to what can be thrown into the Guardians of the Universe’s long past. I would be happy to never again see Krona, Nekron, the Controllers, the Psions, the Manhunters, the Zamarons, Burning Martians, etc. It seems like you’re not really a DC writer until you’ve thrown some dark secret into the Guardian’s past. 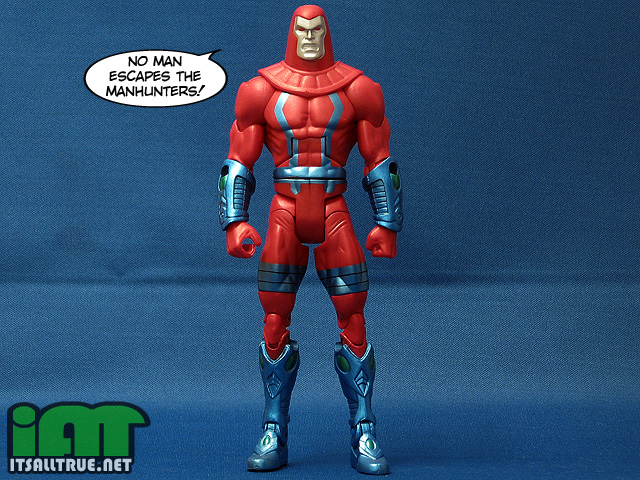 Anyway, the Manhunters were a first stab by the Guardians at the Green Lantern Corps. They were robotic cops who served the Guardians for millennia, but, lacking human intuition, they became obsessed with the letter of the law instead of the spirit of the law and went haywire. They were computers sent out to stop evil see? And they did what all computers do in that situation – decide to kill all the people. After they killed (nearly) everyone in Sector 666 (666=evil, Geoff Johns is a genius!), the Guardians banished their creation to a part of the galaxy where there was no life.

There, they hid out for millennia, infiltrating various planets with robot duplicates or spies to undermine the Guardians. More retconning would lead readers to discover that Alan Scott’s wife & Wally West’s father were agents of the Manhunters (?), the Greek God Pan had been replaced by a Manhunter (??), and perhaps saddest of all – the original Quality Comics Manhunter’s dog (Thor the Thunder Dog) was also a robot spy (???). I’ve always wondered if they killed the original dog, if they just left the robot one on his doorstep with a note, or if they setup a whole pet adoption racket. 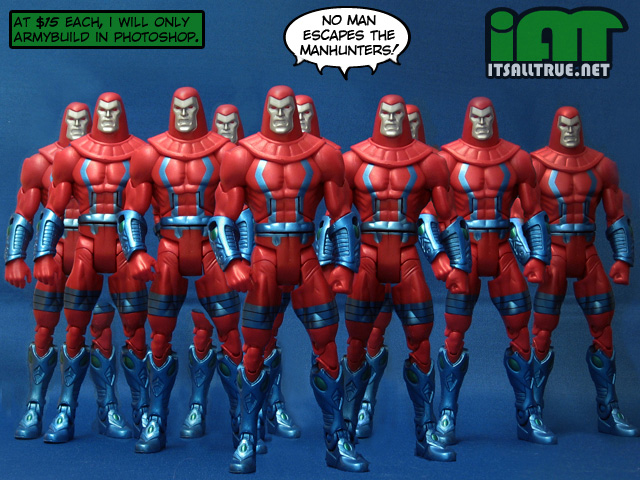 Anyway, the Manhunters finally resurfaced to frame Hal Jordan for destroying a planet and to get their revenge on the Guardians (sharp minded readers might note that the 2nd episode of Justice League re-used that same plot with a few tweaks – like trading John for Hal). They would go on to be the main villains in DC’s Millenium, a 1988 crossover that aimed to create a new set of Guardians of the Universe (but really only created some cannon fodder characters for Geoff Johns and James Robinson). Recently, the Manhunters are back again; tossed into the Sinestro Corps War alongside Cyborg Superman. These Manhunters were controlled by Cyborg Supes and powered by yellow batteries that could also recharge Sinestro Corps members. The Classics figure is based off that current design.

The Manhunter figure is mostly the basic buck with new forearms, new legs below the thigh cut, a collar attachment, and a new head. These pieces recreate the current look faithfully. Since I’m not a Manhunter fan, I can’t say I’d rather have the original look over this one, but it’s a shame Mattel couldn’t shoot for both since some minor changes to this figure – boots, gloves, and maybe a new head would duplicate the classic look fairly easily. One thing I do lament is the lack of a removable faceplate since that’s a key plot point for these new models. 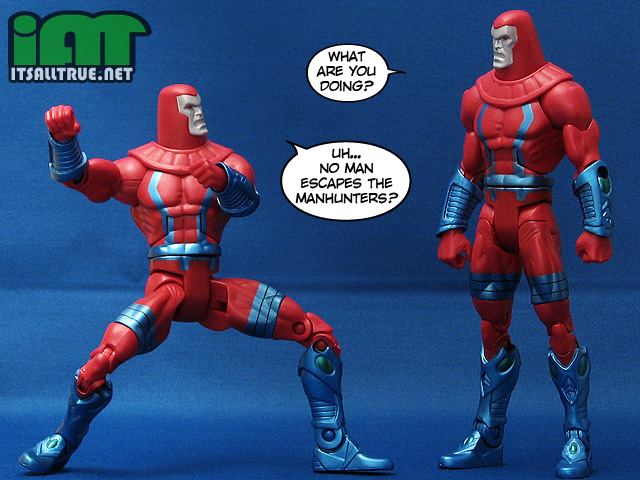 The articulation is wonky again thanks to Mattel’s new incompetent and inconsistent articulation fairy. Manhunter has double knees, but not double elbows. This is particularly problematic because his gauntlets block a lot of the range on the single elbow. The double knees work fine, but the one thing I want out of the articulation is consistency. I’d like if Mattel doubled up all the elbows and knees, but I’d also be okay if they went back to the earlier model (though I would like the rocker ankles back). The one thing I don’t want is for the articulation to be different for different figures. Right now, figures that don’t need the knees like Manhunter are getting them while figures that could benefit from the articulation are going without.

I had no issues with the paintwork on the figure. The pearlized red plastic and the metallic blue paint help make the otherwise plain figure pop when he’s in a group shot. 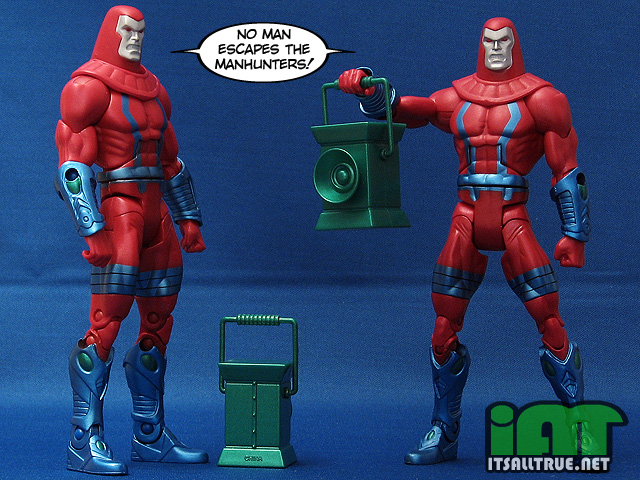 The Manhunter also includes an accessory, his oversized box Lantern. This is a cool pack-in, but I don’t recall if the modern Manhunters carry them anymore. I’m certainly not complaining, getting accessories for DC Classics is basically a nice surprise, but since I don’t think they currently use these lanterns in the comic, I would’ve rather had that removable faceplate I mentioned earlier. In any event, the Manhunter can hold the lantern in his right hand well and the sculpt ensures that it’s a cool accessory.

Overall, while Manhunter has some nicely sculpted pieces, a cool accessory, and decent paint, I just find him rather lackluster. It could be the figure’s issues – his head and gauntlets restrict the articulation. I could be that the design of the Manhunters is just innately boring, or it could be that I just don’t like Manhunters.

And yes, I know, I did buy two. It was a better deal to get the case from BBTS (with the 2nd Low/Maash) then to order the set of six with an extra Low/Maash. And I don’t really mind having two. They’re flanking my Cyborg Superman on the display and helping to make my Sinestro Corps area rather red… 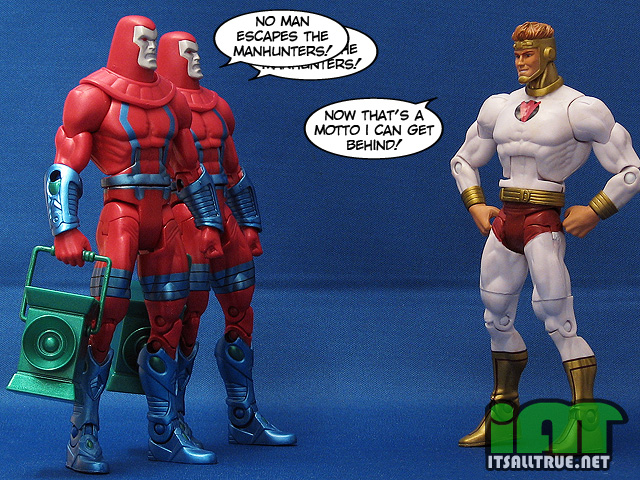