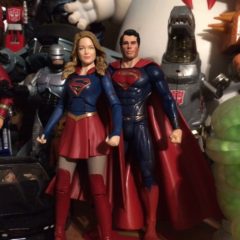 The best thing for me from SDCC last year was that DC Classics wasn’t totally, completely dead. DC’s 4″ Multiverse line had creeped back up to 6″ to make use of the vast library that amazing line had created. We got an entire wave! And a Collect & Connect! It was like a little slice of heaven. (Except for y’know that brief 4″ window was when they decided to do Keaton Bats & Reeve Superman… aaaaaagh!).

I mean, granted I wasn’t going to buy all these new 6″ figures. The Justice Buster BAF thingy looked cool, but got marked with a “does not need”. So did the DC TV figures of Flash & Arrow. And I didn’t need a Joker without a face. The new year one Batman & Reverse Flash were kinda neat… okay, I’ll be honest – only one really wowed me. Calvin Harris, the President & Superman of Earth-23. And you might laugh at my getting excited about one figure – but DCUC was dead. So one more figure? That’s like the clouds parted, the triumphant music cued, angels wept. All that good stuff. DCUC lived on. I’m still excited now, even though Mattel elected to make it difficult by splitting the wave in two (so the first three could clog the shelves and keep me from my E-23 Supes). I just need those pegs to clear like the skies did during the announcement.

Then came NYCC and we got three more! MOTU Classics parts crept into the mix to give us another DKR Batman & a DKR Superman! And there was a bald Guy Gardner, Son of Batman, whatever too. But DKR Superman! It was amazing! Three out of ten isn’t bad. Particularly when you thought there would be no more.

So, I looked to Toy Fair for news of a few more DC figures limping out and… there are! They showed like tweleve, and I’ll buy maybe three of them! It’s like a new record! Most of what they showed was from Suicide Squad. Which, while the trailer amuses me, I probably don’t need. Check out ToyArk’s & AFi’s galleries for plenty of Squad goodness (except, y’know, #wheresHarley)

So, where there comic figures? Yes! 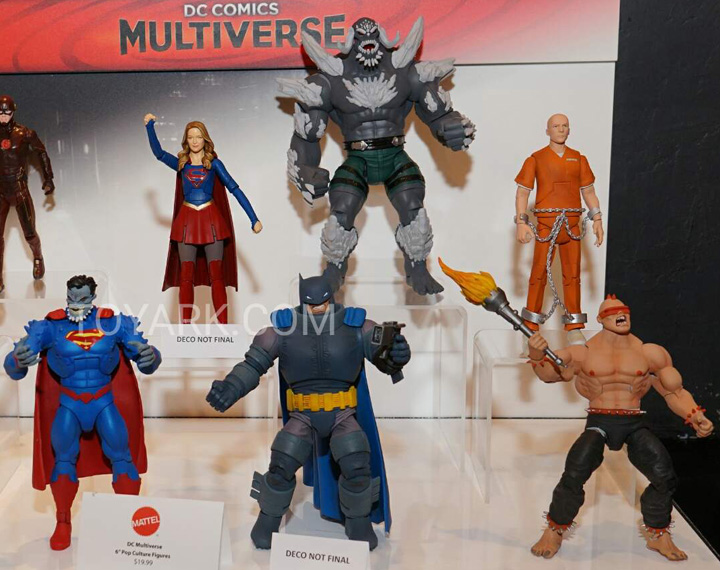 I have to laugh because we’re now three waves into this 6″ Multiverse goodness and I’m still only able to add one, Calvin Harris, to my existing comic collection. I love the DKR figures, but I’m so putting those with MOTU! And the biggest news here is that we get two more of them: Armored Batman & the Mutant Leader. They’re not as crucial as Superman, but they’re cool, and it might get me to buy Bald Guy Gardner. Might. There’s also some bizarre New 52 Superman-turned-Doomsday thingy. There’s what looks like Movie Lex in prison garb (spoiler?) There’s TV Supergirl, which I’ll be honest, I’ll probably buy. And then a build-a-figure of what I guess is New 52 Doomsday. All I’m going to say on that is I have never been more grateful that we got both both Bound & Unleashed Doomsday out of Mattycollector before DCUC “folded”. If those got lost to time and then we got this? Well, let’s just say I’d be trying really, really hard to focus on Calvin Harris & DKR Supes.

I’m still happy though. DCUC lives on. And I’m hoping against hope that they make a second figure I can add to my DCUC shelves here soon.

Again, check out ToyArk’s & AFi’s galleries for great close-ups of all these figures plus the Suicide Squad figs – they honestly look pretty cool, I’m just not going there.