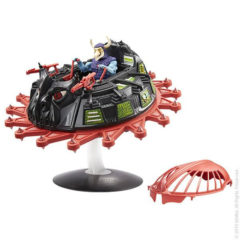 I was surprised by the surge in traffic on the MOTU Checklist going into this weekend. Mattel had taken a different tack this year and had already revealed everything in both the Grayskull & Collector’s Choice subscriptions. Since it was too early for the SDCC item, I figured we’d just see the handful of guys we hadn’t seen during the announcement – Evil-Lyn & Clawful from Club Grayskull & Tuskador and the Horde Wraith from the Collector’s Choice.

We did get to see all four of those. Evil-Lyn was missing a hand, but her & Clawful looked like we’d expected. The Horde Wraith had a nice sculpt, but his colors had been altered to match the bright grey from Filmation found on many of the Horde rank & file. Tuskador was really the big question mark, but he turned out great. He is (wonderfully) Ram Man size and dem tusks! We’ll all need to make some room on the shelf for him to be sure.

There were a few little surprises. General Sunder will have a nice selection of alternate heads to be other characters and a Horde Trooper will be reissued (now single-carded) that will probably be more useful with a couple of those heads than Sunder himself. Evil-Lyn featured an helmetless head and a Filmation episode-specific accessory (as does Clawful).

So, cool stuff, mostly run of the mill, but Mattel did have one ace up it’s sleeve. It’s killer for me because I couldn’t pick up the Talon Fighter (add that to my list with the enthusiasm killing miss of Rotar & Twistoid), so another vehicle just served as a reminder, but what a vehicle! Mattel debuted the Roton! It’s gorgeous (AFI has a great close-up in their coverage) and it’s got plenty of great little touches like the model kit canopy and a Skelecon pilot! I’m not sure an army-builder should be a pilot, but it will keep a few of us from going crazy at least.

I don’t have any large pics of the items, but again check out AFI & ToyArk for some great shots.

I’m not totally useless though: the Upcoming Releases page on MOTUClassics.com has been updated with all the latest reveals!