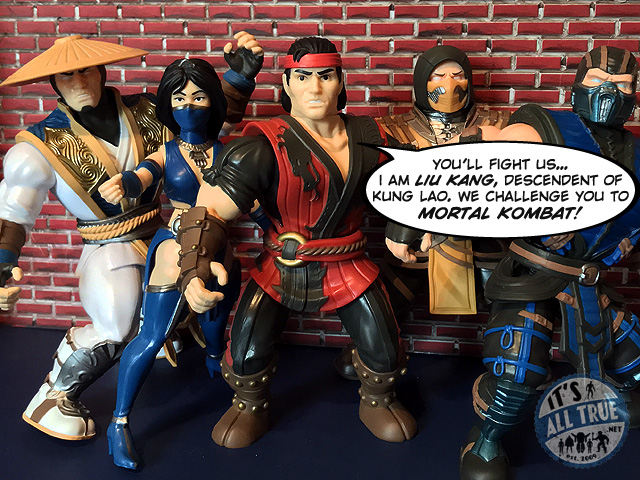 Retro has reached me.

Retro figures have been slowly running against the grain of super-articulation the last few years. We saw the return of MEGO and that okay. We saw the return of Kenner style figures and that was cool. But the folks over at Funko have finally brought retro just a little more forward and now they’re speaking my language. One of the powerhouse toy lines of the 1980s, Masters of the Universe figures had a unique… we’ll call it, battle-ready pose that is synonymous with the line. Though it was copied by a handful of knock-off lines, the pose was a dead giveaway that you had found a He-Man or He-Man like figure.

Now, some thirty years later, the retro lens has fallen upon those classic MOTU figures. Funko’s first foray into the Savage World figures features characters from Mortal Kombat X. The packaging, which I now realize I failed to shoot, keeps it simple and sticks to the vintage theme with a tall card just wide enough that features a bubble similar to the old MOTU figures. The back of the card also calls back to a simpler time by featuring the entire first wave on the box and encouraging us to collect them all.

Once you dig into the package, the figures themselves feature a few surprises. While the overall feel and look stays true to vintage, the figures are updated in a few important ways that really enhances them for modern collectors and will, I think, contribute to some overall success. The first big update is the articulation. While these are true to the basic 6 POA figures they’re homaging, the hips have been updated to be both posable and to do with any pesky rubber bands that will eventually incapacitate the figure. The ball & socket joint on the hips really changes thing up. My MOTU figures in these shots are old, but handling them at the same time really showcased how much better the new hips are and will be in years to come.

When it comes to sculpt, the new figures are chunky just like we’d remember, but strangely, have a ton more detail then any of us would’ve dreamed of back in the day. And it’s awesome. The newest MK game features some of the most ornate costumes yet, far from the old 16-bit days, and that level of detail is well translated here to the figure. Liu Kang’s dragon tunic is probably the best example with even the stitching worked into the sculpt, but I could choose some nice areas on each figure.

The paint is well done on all the figures. Some areas have a simple vintage call back like Liu Kang’s eyes while other figures like Raiden feature more ornate paint applications. They’re well done over all and along with the sturdiness of the figures, these are easily some of my most favorite Funko figures yet.

While Liu Kang has to rely on his kicks and fists, the other figures each feature character appropriate accessories. Scorpion has his swords, Kitana her fans, Sub-Zero has some icy weapons, and Raiden features clip-on lightning. The accessories were the only weak spot for me. I had trouble with Kitana holding her fans and getting the swords into Scorpion’s mitts was a little bit of a struggle. In the future, I’d like to see the hands have a little more give and maybe the smaller items like the fans feature more of a grip.

Wave one consists of Liu Kang, Kitana, Raiden, Scorpion, & Sub-Zero, but this is Funko! It’s not going to end there. Raiden, Scorpion, & Sub-Zero each feature a chase variant. Each one is neatly done, from Scorpion’s flaming skull, Raiden with some charged blue limbs and an extra lightning wrap, to Sub-Zero being complete cast in an icy blue. I want to say Sub-Zero is my favorite chase because he’s so damn… yeah… cool, but the skull head on Scorpion is pretty awesome!

Overall, this is a great start to what I hope is a whole new option for retro figures. The updated sculpting and quality is what has me the most interested. I think those two things in particular could help build this line past ReAction. There are some great 80s properties (& beyond) that would be amazing in this style and I hope Funko gets the chance to explore it.

These figures are just now starting to hit stores so be on the lookout!

Continue to Page 2 for the rest of the story!