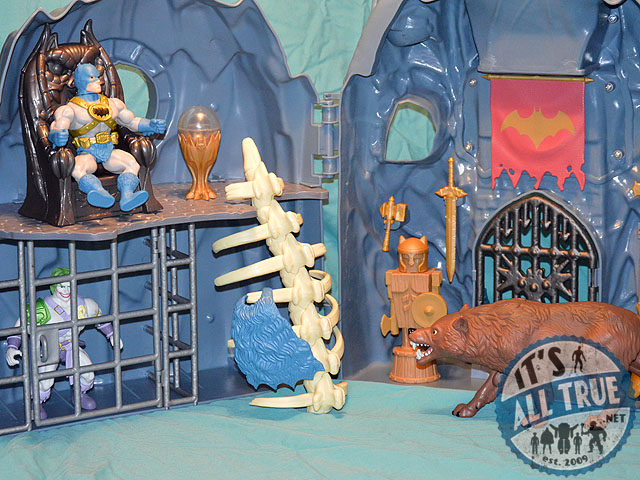 This is a love letter.

Well, no, not this. This is a poorly executed toy review. But the subject of the review, DC’s Primal Age Batcave? That is a love letter to the toys of my youth. From the figures to the playset, it’s clear that this line is being made by folks that loved their toys back in the Eighties and know how to pack in all the little details to capture what made those old toys so great. The retro spotlight has finally started to shift into the 80s, away from MEGOs and lightly detailed 3 3/4 figures and into toys of what I remember, figures reminiscent of 80s wrestling and sword & sorcery toys. This is getting exciting.

The highlight of this first series of DC Primal Age is easily the Batcave playset. First off, it’s a big play set like we used to get more frequently. It looked big from the images I’d seen online, but I still wasn’t prepared when the box from Funko arrived on my porch. The Castle is a shade over 21″ tall, about 15″ wide when closed and double that when opened. It’s as serious a playset as any we had back in the day. My MOTU play sets were all lost in the flood that claimed most of my childhood toys, but I have no doubt that the Batcave would look fantastic next to them if I could group them all together.

The exterior is pitch perfect. There are limited paint apps, with just a darkened area around the face, the bright, almost glowing eyes, and the top of the talons. The sculpt itself is kept simple with a little bit of flourish via the burning cauldrons and their clear bluish fire inserts. It’s just enough to capture enough of the details without going overboard. The back of the playset is simply a rocky surface with the one large window and a small, funny little lizard sculpted in at the base.

Just above the eyes and almost completely hidden if you’re looking at it head on, there’s a balcony area for one figure to stand on and look down on all those who would enter. Being able to slot Batman up there is probably my favorite part of the exterior. That’s his new permanent home when on display.

The inside of the castle is where the toy lets the playset aspect hit home. It opens on a hinge on the right side and reveals a few key areas where the figures can interact with the playset. The front half of the castle features a few clips to hold an assortment of original weapons (a shield, ax, hammer, sword) as well as a clip-on banner featuring a bat symbol just in case you weren’t sure who lived here. The accessories are all nicely done and a few extra points for them being different versions than what came with the various figures. There are also a couple of recessed areas on either side of the gated entrance where you can set an included fighting dummy. It’s a fun little piece with a removable helmet. I also relieved Ace of his gear and tossed it conveniently in the other corner. The gold saddle matches up with everything else and lets the castle feel like it came packed with even more stuff.