Alright, I don’t normally outright post a coverage pic from another website, but I’m hoping ToyArk won’t mind since I really want to talk about what’s in this pic!

I’ve been busy this weekend, so I could’ve missed it, but I feel like this is the under-discussed thing coming out of SDCC. In a very roundabout way, Mattel has kinda sorta resurrected DC Universe Classics. Their 4″ Multiverse line now includes (or has been changed to) 6″ figures. The line continues to feature DC characters based on DC TV shows and films – this wave features figures of Arrow, Flash, & Reverse-Flash from DC’s popular shows. But the rest of the wave? That’s where it gets interesting. 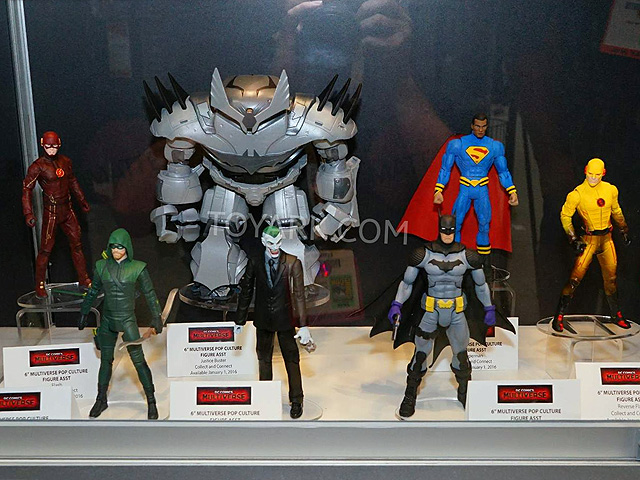 Using some parts from DCUC’s buck system, there are three comic figures in the wave. Batman & Joker from Snyder & Capullo’s “Year One” story line and, the one I will buy for sure, Superman from Earth-23, who, in his secret identity, is US President Calvin Harris! If I close my eyes real hard, I can even say he’s technically not a New52 character, first appearing in 2009’s Final Crisis. For me, it’s a win – I get a new DC Classics figure, one I like, and a Grant Morrison figure to boot. To make us feel even more of those DCUC glory days, the wave features a Collect & Connect too! Going withe the Snyder Batman figures, the C&C is the Justice Buster suit. A suit designed by Batman to take down the Justice League quickly.

Could this be a glimmer of hope for DC Classics collectors? The line is clearly going in a new direction, but if I could get a salt & peppered in figure here & there, I’d be pretty happy!

For more pics from Mattel’s Booth, Continue to ToyArk!