Marvel Legends. For many collectors, it’s a hallowed line. Even if you’re not a fan, you can’t deny the influence it’s had on the toy industry. Hasbro hasn’t always lived up to the bar Toy Biz set for the line, but I keep hoping they’ll get there. This week, I purchased the Black Widow & the Winter Soldier’s variant 2pk.

You don’t see many Marvel Legends reviews on IAT. There are two reasons for that. One, Hasbro hasn’t produced many in the time that IAT has been online and two, the few that have been released didn’t really appeal to me. I bought the Nemesis Wave last year, but I was disappointed with a lot of it. I’ve wanted a few of the Hasbro 2pks (some of those S.H.I.E.L.D. figures were awesome), but I never got around to them.

For this latest wave, I was going to just buy the Valkyrie 2pk, but when I found these at TRU, things changed. First, the two Valkyrie’s that were there were painted really poorly and I couldn’t buy either. Next, I was really surprised by how cool the red/blue version of Warpath looked. I don’t even know the first thing about the second Warpath, but he looks like an old school Marvel Legend and he may end up at my house just because of that. Still, I was good, trying to stick to the plan, and just wait for a second shipment of Valkyries. Then, I saw the variant 2pk of Black Widow & Winter Soldier. 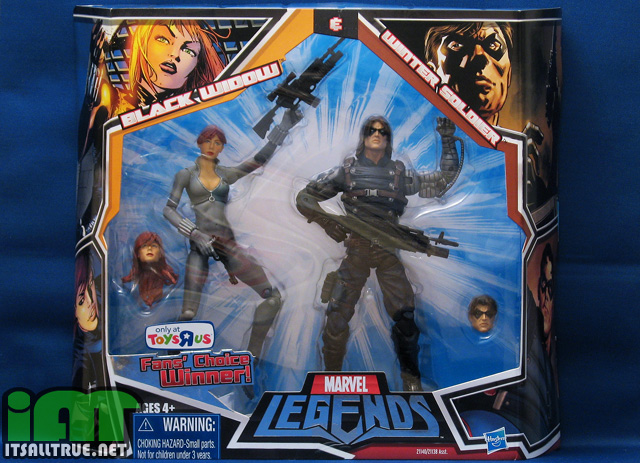 From the pics I’ve seen online, I knew Black Widow was a step in the right direction for Hasbro (a lot of the 2pks have been), but I still wasn’t planning on buying her. In person, I was really impressed by her head sculpt and, even though it’s not quite right on the figure, I’ve always been a fan of her grey costume. (I know it’s a Frank Miller thing, but I have a soft spot for alternate costume designs… I don’t know why). It didn’t hurt that she was packaged with the Winter Soldier either. He looked cool enough and I’m a fan of the story unfolding in the Captain America franchise the last few years, so I went against my good intentions and handed over $25 plus tax to Toys R Us and these two came home with me. You can check out the back of the packaging here. 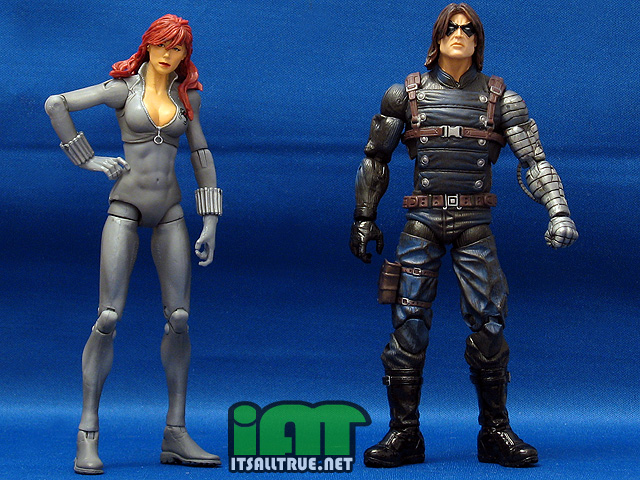 If you’re not familiar with these characters, here’s two quick bios:

Black Widow first appears in Iron Man as a plainclothes Russian spy in the 1960s, but gradually made the transition to the Black Widow we know today. Originally, she was simply a femme fatale to seduce Tony Stark, but she ultimately defects from Russia and joins the Avengers. In 1970’s Spider-Man #86 she appears in her trademark skintight black costume that will become most associated with her character. She’s a highly-trained operative with all talents you’d expect – expert martial artist, weapons training, world-class gymnast, ballerina. Yeah, ballerina. She’s Russian and comics aren’t that deep, okay? Black Widow is presented here in the grey costume first drawn by Frank Miller in 1982.

Winter Soldier first appeared in 2005 as a Captain America villain, but Marvel had bigger plans. Marvel teased his true identity and discovering his origin was a major part of his early appearances. Ultimately, it was revealed that the Winter Soldier was the (assumed) long-dead Bucky, Captain America’s WWII sidekick. The Russians had found him, missing his left arm, after the plane they were on exploded. While Captain America was on ice for a few decades, Bucky was brainwashed and used as a Russian assassin. Luckily, the Russians cryogenically preserved him between missions so he could be just the right age to confront Cap in the current comics. Cap ultimately freed Bucky from his brainwashing and he began to operate as a hero until Cap’s untimely “death”. That’s when Bucky traded in his Winter Soldier garb to be Captain America. 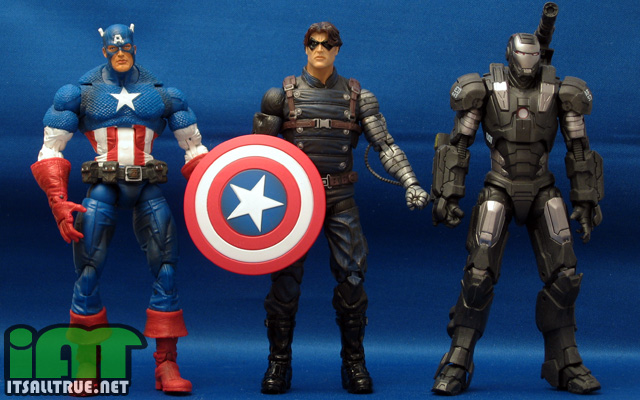 Oh yeah, toy review. Like I said, I haven’t kept up on all the Hasbro Marvel offerings, but I recognize a lot of Winter Soldier. He’s built from the Nemesis wave Punisher buck, but features two new heads, a new bionic left arm, (I think) a new regular right arm, new boots, and a softer plastic piece over this chest to complete the Winter Soldier’s uniform. I really appreciate the collar piece. It’s small and I probably wouldn’t have missed it if it weren’t there, but it was a smart move on Hasbro’s part. It makes the figure more accurate with little effort. It is little touches like that that can make the buck system successful. The collar along with the more obvious boots and chest piece, move this figure beyond a simple buck figure and into something unique.

The variant Soldier features his ‘evil’ red star on his left shoulder, so he should be sporting the longer hair from his first appearances, but I can’t decide which head I like better. The face sculpt is the same for both with two different hair pieces capturing his two looks. The face sculpt is great and because of the painted pupils on the short hair head, Hasbro manages to get two expressions out of the same sculpt. I think he’ll end up with the longer hair on my shelf, but it’s always nice to have the option of a second head. 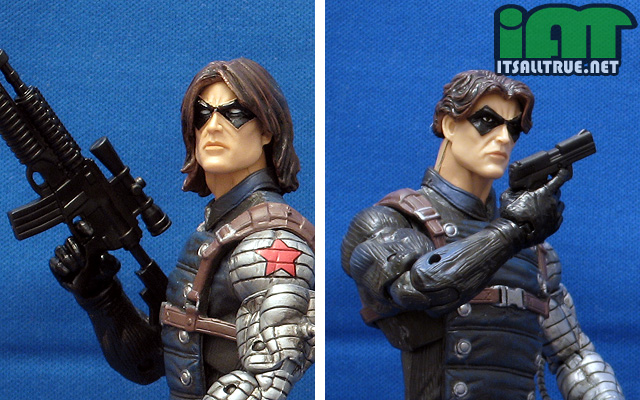 The only issue I had with the sculpt was the hands. The bionic arm is a fist leaving the figure unable to do any poses with both hands on the gun. He’s an assassin and I’d like to give him some cool poses with two hands on his rifle. The right hand is open, but not quite scaled to hold the rifle and hand gun he comes with. He does have an open trigger finger though. I’m glad it’s there because it makes the figure look better and because the finger can stabilize the gun while the grips ‘rest’ in his hand. His pistol fits in the holster on his right leg, another plus.

The long hair head’s domino mask isn’t painted to the sculpt lines, but it’s close and the lines are at least straight. Otherwise, the paints are mostly great. I like that the figure is cast in a darker blue and washed to give his uniform a ‘dirty’ feel, but the contrast is too high in some areas leaving bright blue areas with “black” highlights. There are plenty of nice parts though – the straps and buckles are all sharp, the boots are done in a glossy black, and the arm and red star logo look great too. 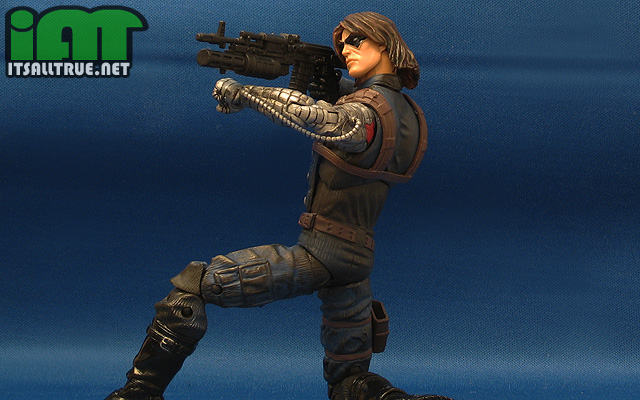 Since the figure is based on an older Hasbro ML body, the articulation isn’t as nice as I would like. There’s still plenty though – ball joints at the head, shoulders, hips, wrists, and ankles, swivels at the bicep and thigh, double-hinged knees and elbows, and the chest pivot. The head has excellent range and you can get plenty of good poses out of it without exposing the unsightly hinge in the neck. The shoulders are ratcheted and I’ve had a really hard time turning the bionic arm. It’s very tight and I fear something will snap every time I move it. All the other joints work well and I was able to get some great poses though it took some effort to get the ball hips to do what I wanted them to do. Continue to Black Widow…