What surprised me the most about Moguera was his ability to actually pose. I thought I was going to get a square with very basic articulation, but that wasn’t the case. Moguera’s head, neck, shoulders, elbows, waist, thighs, knees, ankles, and tail are all revolver joints. To keep his boxy design from being too much of a hindrance, they also added revolver joints to the two panels covering the top of his thighs. The only part of him that isn’t a revolver is the four segments to his tail, which are swivel joints.

Because of the high articulation, Moguera is able to take some pretty fun poses. Because of this, and his Hammer-pants styled thighs, I always see him as dancing when he’s taking on the more extreme stances. 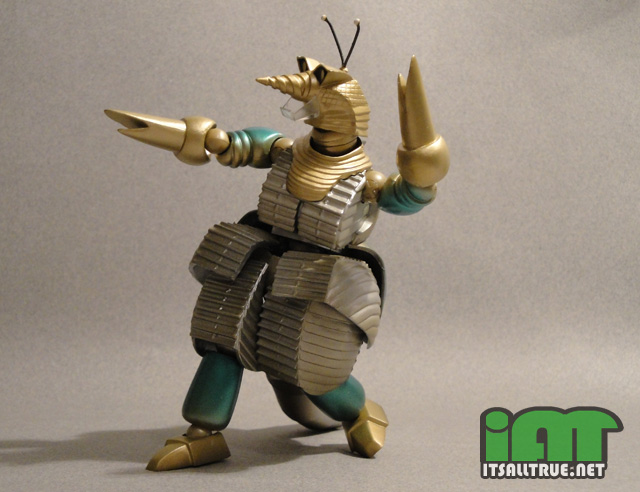 Another pleasant surprise was how many accessories Moguera came with. For his own body, he comes with another set of antenna which isn’t as symmetrical. I haven’t seen the movie, so I’m not really sure what they are for, other than the fact that they probably looked like that at one point. There is also the Sci-Fi nameplate and the classic Revoltech orange box.

One of the coolest items that he comes with is the incredibly out of scale Mysterian Commander. The Mysterian Commander is decked out in red and white and has no articulation. He just stands there, looking ominous. I’m glad they threw something like this in, even out of scale he is still cool to have. One thing I would have liked to see is more Mysterians. They could have used the same mold to make the yellow and blue ones. 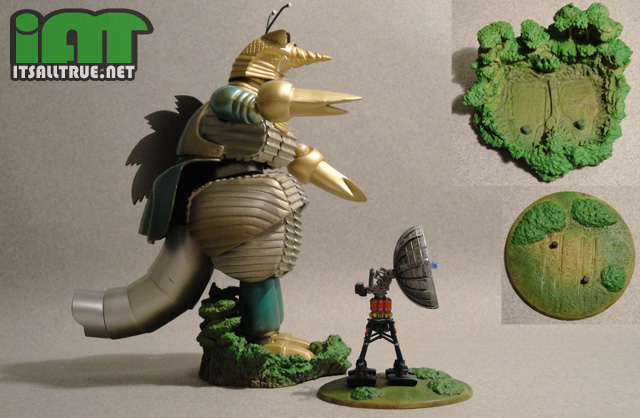 My favorite item has to be the Markalite Cannon, though. Set up like a giant satellite dish on treads, the Markalite Cannon is what the human forces used to eventually defeat the conquering aliens. I love all the small paint and sculpting details they put into this tiny piece. Not only that, but the dish itself is on a hinge joint and can move up and down. The dish is a little top-heavy for the joint, though, and the dish has trouble staying posed in the position you may want.

Last, but not least, are the two great bases that come in this set. The first is a forest base for Moguera to stand on. I’m glad they added this base into the set because Moguera is slightly back heavy with that chunk of a tail. Although you don’t need the base for him to stand, it does help. The other base is for the Markalite Cannon. It’s just a small clearing with some bushes, but what’s really nice here is the sculpted in tread marks that the Cannon left as it rolled across the ground. Love those little details. 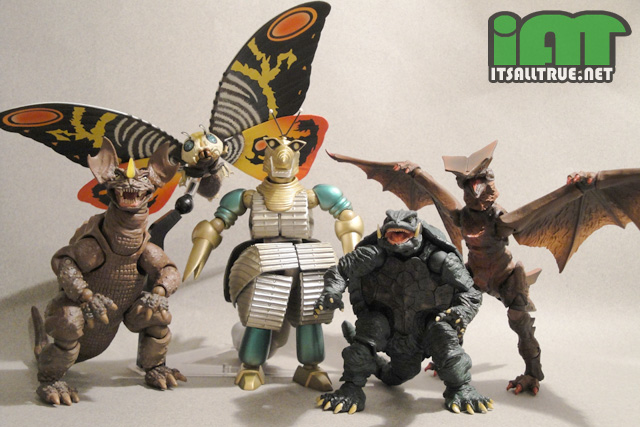 At the end of the day, I’m actually glad I ordered Moguera. He may still be a lame character, but he turned out to be a pretty good toy. That’s what I’m always looking for. Like the other Revoltechs, he’ll run you about $30 plus shipping, but with his articulation and accessories he’s actually a better deal than Mothra. Plus, he looks great with the rest of the group.