Sometimes I do reviews right away. I’ve turned around some MOTU figures within hours of their arrival. Other times, I get behind. That’s the case today. I didn’t pick up the Walmart 2pks at first. I finally got them for my birthday, but even that was a month ago. Not the most exciting figures, but they do warrant a brief look.

We first learned about these two packs back in December via ToyFare #150. They were part of a new sku at Walmart, one that evidently didn’t pan out because the next 2pk – shown on the back of the box to be a light blue Superman/Bizarro 2pk was ultimately cancelled. I don’t remember exactly when these two-packs hit retail; I want to say sometime in the spring. While I found the decos compelling, they just never made it to the top of my buy list. Fortunately, my family snagged them for me last August as a birthday gift.

* – They don’t read IAT regularly, but if they happen across this – Thank you!

I always have a hard time reviewing repaints because I feel that I covered most of the important stuff in the review of the original figure. As such, this will just be a quick look at each one with a few notes here and there to make it look I at least put a little work into this. 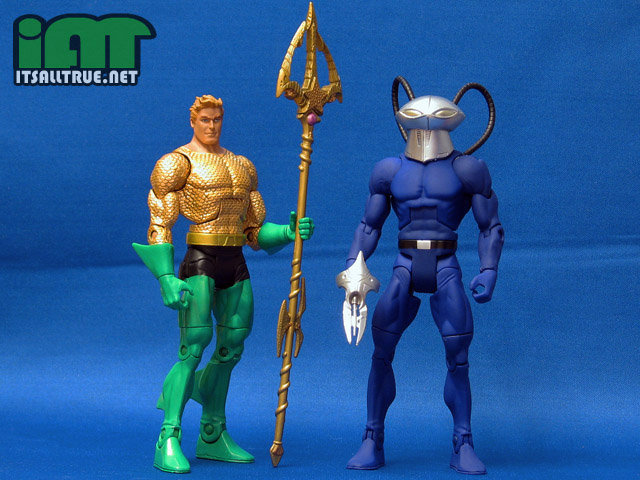 The first 2pk, Undersea Assault, featured repaints from Series 2, Aquaman and Black Manta. Even though parts of this wave ended up being plentiful around my neck of the woods, Aquaman never seemed to linger. I think I’ve only seen a handful of either Arthur or Clarthur (his clone replacement) on store shelves. So Aquaman has been in dire need of an All-Star repaint. This repaint, I’m going to guess is based on the Ross art, is as close as those fans have gotten.

He looks okay with the gold really (though the upcoming Mer-Man 2pk might feature a better, more orange metallic, I’m not sure yet) and brighter green, but what really helps this figure is the awesome sculpt and great articulation of the original. That Aquaman is still one of the best figures in the line and this ‘Rossian’ repaint works because of it. 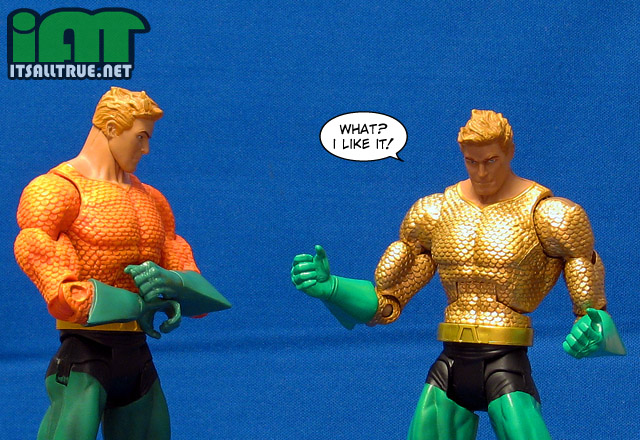 Manta was the ultimate reason for my wanting this set. I prefer the comic accurate colors to this Super Friends version, but he has something cool that the pictures can’t show you – texture. The figure feels like he’s in a wetsuit. He’s coated in this nice rubbery material from the neck down. It’s just the right little touch to give this repaint some added value. I don’t know the stability of this particular coating, but it seems resistant to dust accumulation and minor scratches, so here’s hoping it’s got some lifespan. Oh, and both Manta’s are the same height, I don’t know what I did in that picture there… 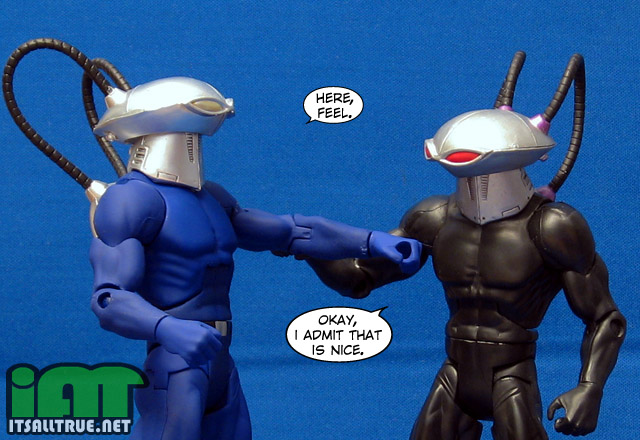 The other 2pk, Dynamic Duo, had me at similar odds with myself. Did I need a sixth Batman? Not really. The Robin was somewhat appealing because even with his lack of proper details, he was in the right color scheme to use this tiny buck (his older, OYL red costume should’ve used the mid-sized teen buck like Superboy). There’s also that dreaded completism to think about. I have all the DCUC/PEs except for the two Public Enemies repaints and in my weaker moments I kinda want those. Sad, I know…

Oh, and, before I forget, this 2pk is supposed to include a batarang, but mine didn’t come with one. Oops. 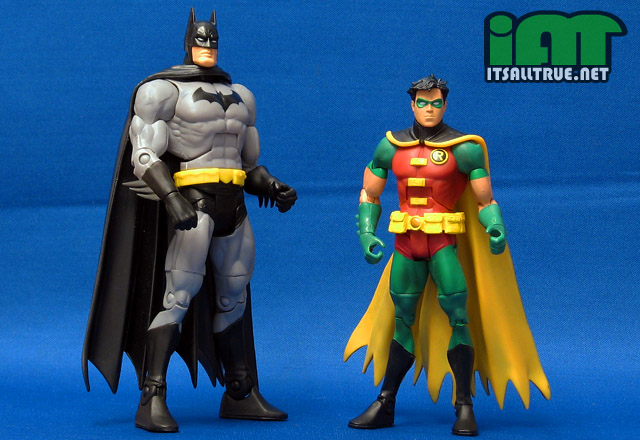 The Batman featured in this 2pk is a repaint of a repaint. The TRU exclusive Batman was the first DC Universe Classics Batman to go no oval (I’m pro-oval, if you’re at home keeping score) and that turned out to be an awesome figure – even giving me a better appreciation of the no oval Batman. This repaint doesn’t quite do that. I like the panel belt, but it’s very bright on this deco and when contrasted with the TRU Batman, you can really see how the darker belt on that figure accentuates the overall aesthetic. 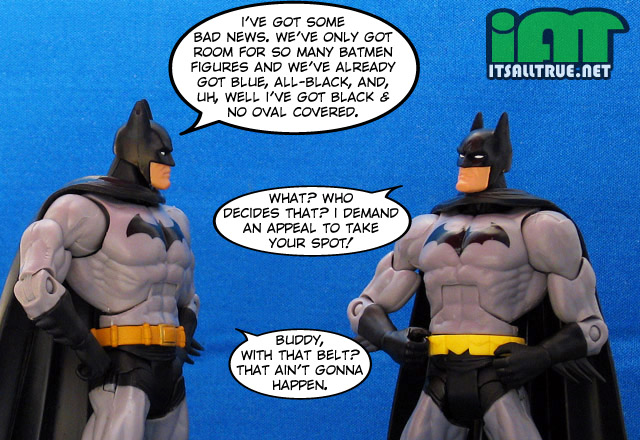 For most collectors, I imagine that Robin is the bigger draw on this set. As I mentioned before, he’s not terribly accurate. The symbols, clasps, glove scallops, and belt are wrong. Despite those differences, it’s not a bad figure – though the ‘R’ tampo could’ve been updated to be correct since it’s not limited by the sculpt. In any case, this younger version of Tim makes better use of the buck and appeals to me more than the older one. Ultimately, if you want this Robin in his correct form, Toy Guru has said that these 2pks aren’t targeted at collectors and that his inclusion doesn’t preclude a proper one down the road. 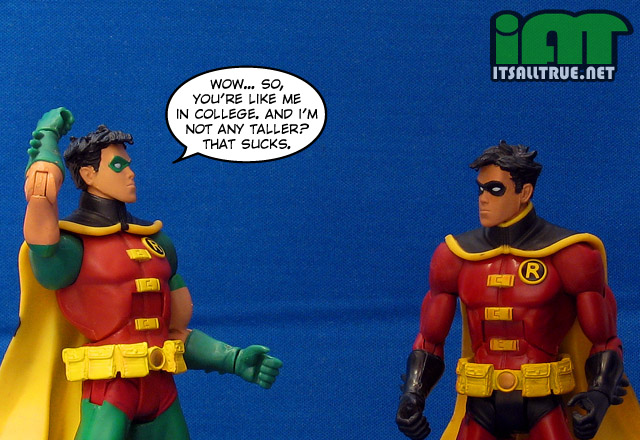 Overall, these are fine enough 2pks if you’re interested and easily skippable if you’re not. Toy Guru could get to this Robin again later, but the line will end someday and a lot of us are going to be missing one or two figures no matter what happens. Robin is an unlikely candidate to be missing, but I always keep that in mind when I hear the ‘stay tuned’ promise.

The quality of plastic was more on par with the 2pks from 2009 than the sub-par 2008 offerings. The paint work was similarly good on these two, but I have seen some with more slop than usual, so choose carefully if you’re still finding these in stores. Speaking of, the Wal-Marts near me that didn’t get rid of comic-based toys left a spot open for 2pks in their Christmas resets. I find that odd since new ones have been cancelled at Mattel. Is Walmart expecting another batch of these two? If so, that’s a shame I would’ve been up for a couple more of these 2pks. I love getting new characters, but there are more than a few redecos that I want to see in the line too.