Revoltech’s Sci-Fi series continues with two more kaiju releases this month. First up is one of the most popular and recognizable monsters in the Godzilla universe: The Thing known as Mothra, Guardian of the Earth. As a Godzilla fan, I had to have it, but I also had to see what Revoltech could possibly do with a moth.

I’ve always been a fan of Mothra. Ever since I first watched her fight Godzilla to a standstill, and then her bad ass twin larvae were able to take him down. As a little kid, that’s impressive. Sure she’s just a giant moth and a couple of worms, but they must be really powerful to take out the big G. So when Mothra’s preorder popped up last spring, I was all but running to put her in the cart and wait out the few long months for her release. 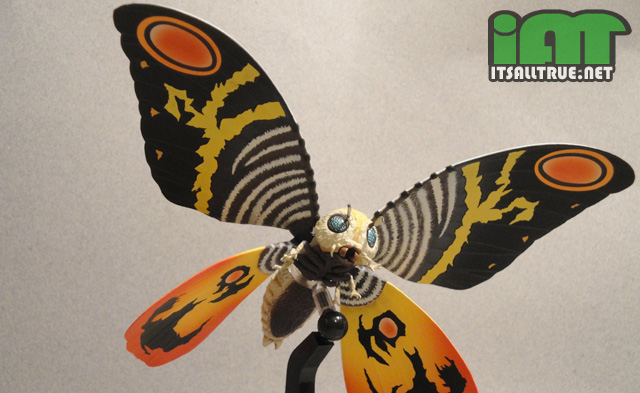 This version of Mothra is from her debut 1961 movie of the same name. Three years before battling Godzilla, Mothra fought the enemy of all monsters: Man! Kinoshita Takashi did a great job staying accurate to that original Mothra model when sculpting this figure. Like the other kaiju Revoltech figures so far, Mothra walks the fine line between realism and mimicking the actual model used for the movie. This is probably most evident in her eyes. From the front, you can see that her eyes aren’t symmetrical. The interesting thing is that this isn’t a distraction and actually gives the figure a little personality. 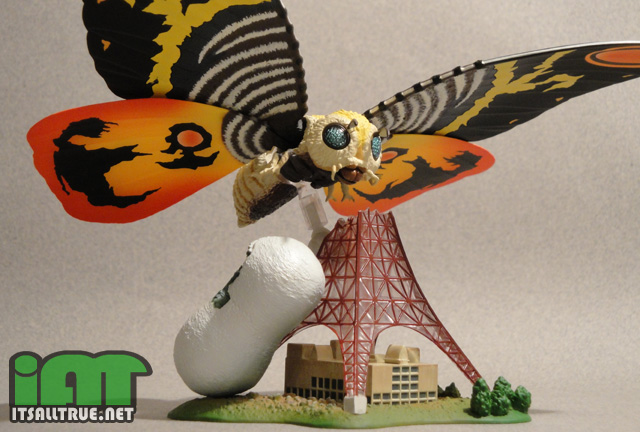 Beyond the quirky details of the original model, there are the more natural features you would see on a giant moth. There is sculpted fur covering her entire body, but the different patterns and colors are textured uniquely from each other and really add to the realism of the figure. Then, on the wings, each large scale is separated from the next by a sculpted indent on the top side and bump on the bottom side. This gives off the look and feel that each large scale is a separate piece. The fur on the inner wings is textured to feel rough as opposed to the smooth scales on the outer parts. There are even small bumps on her wings where the blurry line patterns meet the edge.

Lastly, two of the smallest details I’ve ever noticed on a figure. Mothra’s antennae have tiny ridges. You can barely see them with your eye, but you can feel them by running your fingernail along their length. Also, Mothra’s eyes are a clear smooth outer plastic that covers a bumpy textured bug lens underneath. I love these two little details so much. It shows the sculptor really put some love into this figure. 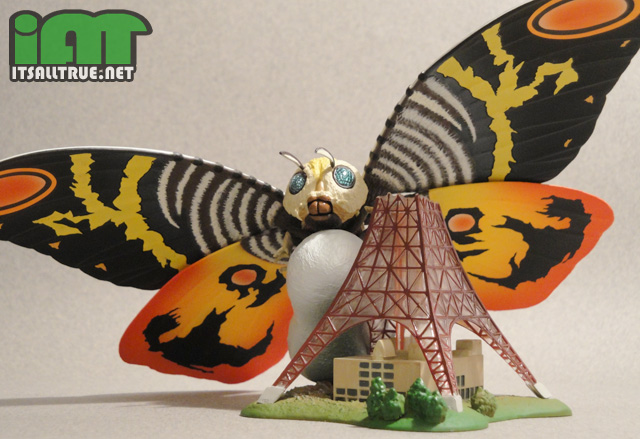 Mothra’s paint job is also superb. The different textures of fur on her body are different colors from each other. This breaks up the monotony of the browns and helps accentuate the different sculpted details. The eyes are a metallic blue-green and would probably draw most of the attention if it wasn’t for the fiery neon yellows and oranges on her wings. Each wing shares a matching patter, but they aren’t exact duplicates. Like in real life, there is variation on the patterns. It’s just enough to allow each wing to mimic the other while still remaining unique. Continue to Page Two….