A couple weeks ago I reviewed the new War for Cybertron Optimus Prime. I had bought Bumblebee with him and meant to review him the next week. My intentions, and attention, got subverted by other toys though, but now I’ve returned to Mr. Bee before he becomes entirely obsolete.

Megatron and Soundwave have started hitting stores. I haven’t been lucky enough to find them yet though. But that’s another reason I’ve decided to go back and do Bumblebee. I don’t want to get too far behind on my Transformers reviews before new one’s get piled on. 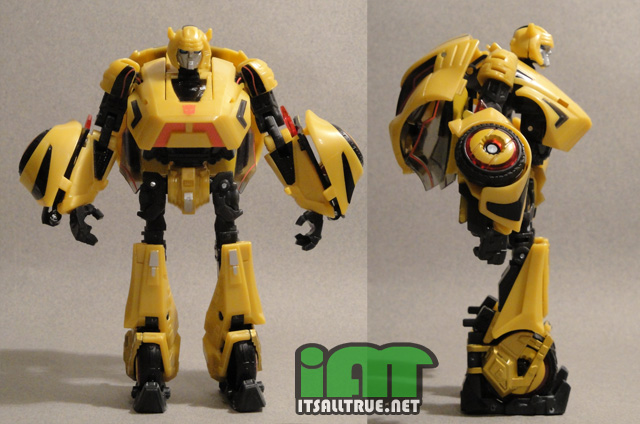 Like Optimus, there are things I love and things I hate about this figure. Bumblebee’s robot mode is decent looking, but there are a couple of peculiarities about it. I do love his head sculpt. There’ve been a lot of Bumblebees over the years, but I think this is one of the best looking head sculpts I’ve seen. It’s just very classic looking, without being too boxy. Another thing I like about the sculpt is all the little details. Like Optimus, there are these great areas all over his body that show off the Cybertronian tech. What I don’t like about Bumblebee’s robot sculpt are his awkward proportions. His arms and legs are both longer than his body. This gives him a strange squat look, like he’s only got half a torso. This isn’t helped by the fact that the rear canopy of his car mode just sits behind him, giving him a hunched over look. Kind of reminds me of a little yellow Quasimodo.

There’s also an issue with Bumblebee’s size. We all know Bee is the short guy in the Autobot’s group, but in this toyline he’s about the same size as Optimus, Soundwave, and Megatron. I brought this up in my Optimus review, saying that Optimus should be larger. But those more dedicated Transformers fans out there disagreed with me, saying that it was Bumblebee who is too large. After seeing Megatron and Soundwave, I’m going to have to agree. Bee is too big in this line. But, I don’t think he’d look as good in Scout class and I still contend that Optimus and Megatron should be Voyager class or larger. The real problem with this line is Hasbro limiting it to Deluxe class. I’m not really sure why they did that, but I think it’s a mistake. I want my robots big, unless they’re Bumblebee. 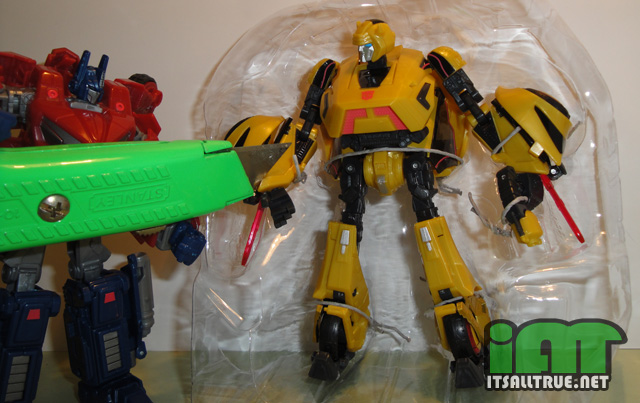 They did a great job on Bumblebee’s paint job also. Although he’s mostly molded in black and yellow, there are a lot of small paint apps over his body with very little slop. His eyes are probably one of the smallest details I love. There’s no light piping, but they are painted with a glossy bright blue. Not only that, but there’s this thin black outline around the blue. I have no idea how that didn’t get sloppy. There’s also this great fluorescent orange on his headlights and tail lights that contrasts the yellow and black nicely. One other thing that I like, but thought was strange, is that the panels on the outside of his wheels/feet are gold, not yellow. Not sure why they went with the different color, but it looks cool. Like he’s wearing flashy shoes. 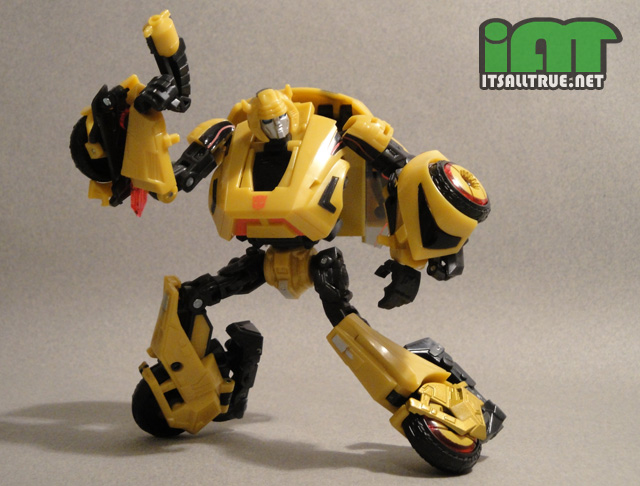 Like Optimus, the articulation on Bumblebee is insane. He’s got a ball jointed head, shoulders, wrists, and ankles/feet. His bicep, waist, and thigh are swivel cuts. His knees are hinged, while his elbows are double hinged. Lastly, he’s got swivel/hinged hips. This gives him a huge range of movement, but because of his disproportioned body shape it’s difficult to get him in a position that doesn’t look strange. Continue to Page Two….