Sometimes I find the unexpected on my bi-weekly visits to Toys R Us. Last week, I was surprised to see the new Minimates vehicles hanging on the pegs. The Hunter Killer from Terminator was particularly tempting, but I eventually decided to just get one. And the Back to the Future Delorean was it.

I remember seeing pictures of these vehicles from SDCC and Toyfair, but it still feels like they snuck up on me. Maybe it’s because I was expecting to see them solicited by Diamond. That’s where I usually keep track of Minimates happenings. But this set of vehicles is an exclusive to Toys R Us, at least according to the stickers they all brandished. So head on over to your local TRU if you’re looking to pick up a tiny time machine, a micro jet plane, or even a lil’ Hunter Killer. 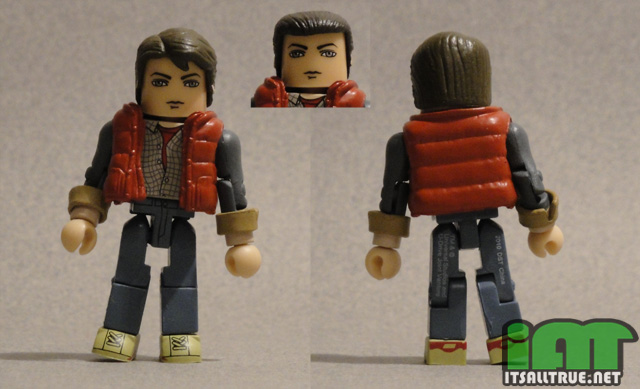 Most Minimates share the same body basic body design, and Marty here is no different. He has a ball jointed head, shoulders, and hips. His elbows and knees are hinges. While his waist, wrists, and ankles are swivel joints. Marty comes with an extra sculpted vest piece that sits over his chest, and two cuff pieces that slide up his arms. For some reason they included an extra set of hands and an alternate hairpiece in the box. I can see getting extra hands in case you lost one, but the extra hair looks terrible and nothing like Michael J. Fox’s. 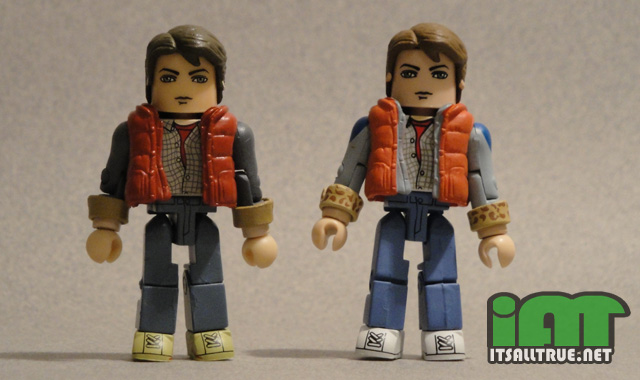 This Marty figure is also a repaint of the original figure that was released in a four-pack back in 2007. Although it shares the same basic design, it is much less detailed than the original. Right off the bat you can tell that the colors are a lot darker overall. The light grays and blues of his clothing have been replaced with darker grays. His light brown hair is now dark brown. His vest is red instead of orange. And for some reason his shoes are now a yellowish off-white instead of white. But it’s not the color differences that bother me, it’s the absence of detail. The original figure had leopard print on sleeve cuffs and blue on the shoulders. Also, the shirt part of his vest is painted a light blue. But the new figure just has his painted the color of the vest. Maybe Art Asylum was trying to make this figure a little different from the original. Or maybe they just wanted him to be cheaper. I’m not sure, but either way I like the old Marty better.

The “Mini-Time Machine” isn’t a spot on model of a real DeLorean. I’m assuming that was done on purpose for licensing reasons. So don’t expect a perfect replica here. Like the movie DeLorean, its painted silver with black trim and both doors open upward. On the back are various buttons and tubes and other sculpted bits running around the two exhaust vents to the reactor setting between them. 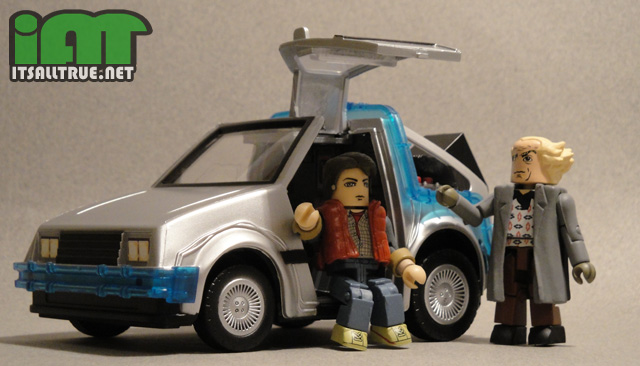 With the included stickers you can add the headlights, brake lights, and rear license plate. They even added clear blue bars along the front bumper and over the top to simulate the time traveling action. So even though it’s not perfectly accurate depiction, it still gets the point across that this is a tiny version of Doc Brown’s DeLorean. Continue to Page Two….

14 thoughts on “Vault Review: Back to the Future Minimates – Delorean”