On our forums, I was just talking about how I’m not really into characters that are “badass for badass’ sake”, but then I turn around and do a Drift review. It would appear that my hypocrisy knows no bounds, but the truth is I haven’t had a chance to read a comic about Drift. I bought him because he looked cool.

I’m not really sure how much of a badass Drift is supposed to be in the comics. I am getting back into IDW’s Transformers with the launch of the new ongoing, but I haven’t had a chance to go back and catch up on what I missed. That pretty much includes Drift in his entirety. Bumblebee mentioned meeting him in the latest issue and I’m not sure what story he’s referencing. I went online to read up on him and the entries at TF Wiki & Teletraan tend to disparage more than celebrate him as they explain his creation and subsequent installment into Generation One history as a Decepticon turned Autobot. He definitely sounds badass for badass’ sake, so why did I buy him? It’s simple really; his toy is awesome.

Even though I’m not sure if I’m going to like Drift the character when I pick up his miniseries this fall, I do enjoy this toy.

His alt mode, which I can’t really identify as a specific car, has plenty of little sculpted details from the front grill to the exhaust, features clear windows (except for the rear window), and a nifty ‘custom’ paint job befitting his name. And he’s sleek too. In his car form, pretty much everything but the front bumper snaps snugly into place – sometimes too snug – and gives him a great overall look. He’s spent almost as much time on my desk as a car as he has as a robot.

I haven’t bought any non-animated deluxes in a few years, so I don’t have a good comparison shot of that class. Seaspray will have to do. They make a strange pair since Drift was designed to fit in to Generation One and Seaspray was updated out of it (but apparently is still the same Seaspray in continuity). 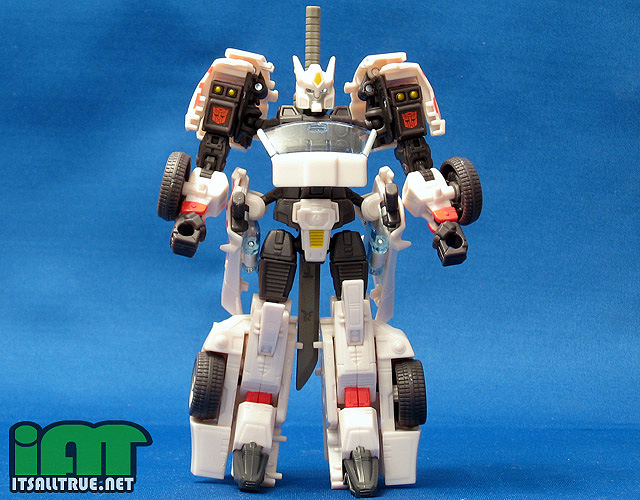 The transformation process is rather straightforward and after getting some painful figures in the last couple years, I really appreciate it. The back of the car flips out ingeniously to make his legs. I can’t really explain the process, but his knees are folded up in his trunk while his feet are the roof the car. It’s magic, I swear.

His arms fold out from under the hood, his doors fold down to provide sheaths, and the windshield moves up to cover his chest. It can be done rather quickly, the only hang-up being that some of the car parts that peg together tend to want to stay together. While that gives his alt mode some good cohesion, I’m a little fearful that I’m going to snap a peg here and there when transforming him. 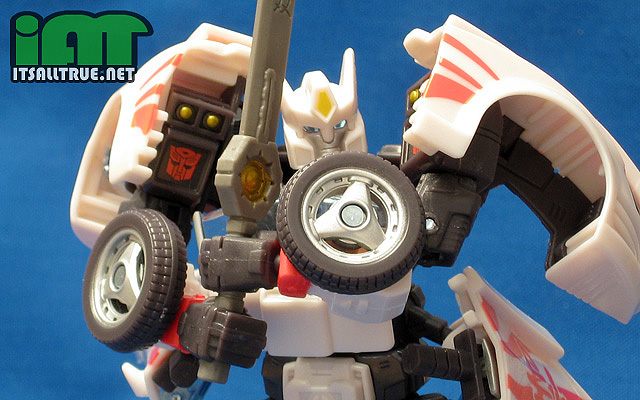 Another thing I’ve been appreciating about newer transformers is the articulation. While, I love the boxy look of the TFs of my youth, I really appreciate how the modern ones can move. Drift has a ball-jointed head, shoulders, wrists and hips, double hinge elbows, hinge knees, and swivel thighs. In addition to that ‘figure articulation’ he can do a bit more with some extra “transforming” articulation in his shoulders, sword sheaths, and calves. The calve transforming points can somewhat simulate ankle joints, but one of the few ways Drift could be improved was if he had proper articulated feet.Continue to Page 2…