MOTUClassics.Com:Can you clarify where the line is being drawn for 200x influence? Second heads are out, but 200x weapons, redesigns like Sorceress, and characters like Carnivus & Dactus are still safe? From the outside, this rule appears hard to follow.

We are working with multiple Mattel departments on how much 200X influence can be in the MOTUC line. Toy Guru is a huge fan of the 2002 series and we will incorporate details when we can, but all will be “Classic-ized” similar to how we did Chief Carnivus. There isn’t any other rule other then trying to keep everything in one unified Classic look.

MOTUClassics.Com:Even though we’re not getting it, we have to know – what was Bow’s third head? Will we ever see a feature on some of these sculpted, but unreleased pieces?

It was a Classic toy head without the headband. Cornboy sculpted it because he felt many fans lost the headband and don’t even remember having one. We would have loved to include it but we were only able to include two heads. Maybe one day we will refresh Bow with this head.

DCClassics.Com:Will the DC vs MOTU Aquaman be a straight re-issue of the Aquaman included in the Undersea Assault 2pk?

Aquaman sculpt will be the same but he will have a redeco’d belt with gold highlights.

DCClassics.Com:What will be the rollout on the new articulation in DC Classics? Obviously, any new bucks will have the double knees and elbows, but will we see that articulation spread to all future figures?

We will only increase articulation on figures that have a compelling reason for more articulation (like Blue Beetle 3 who wears armor). We don’t want to chop up the beautiful Horsemen sculpts just to add articulation.

DCClassics.Com:We know it’s a ways away, but since it’s been said GL Classics Wave 1 & 2 will roll into the movie line – does that mean the movies figures will be in-scale with DC Classics and not the Movie Master line?

The Movie Masters for Green Lantern will be in scale to other movie masters like Dark Knight and Ghostbusters: still 6-inches but more proportioned to the actors. 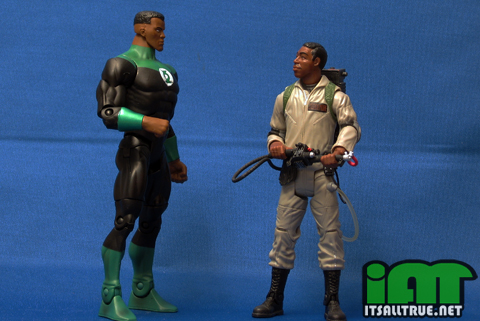