With my newfound love of Steven Moffat’s Doctor Who, it was only a matter of time before my toy collecting started trending that way also. What better way to celebrate and support what you love than by buying small plastic totems? Thus: my purchase of the Eleventh Doctor and new Dalek two-pack.

As with my last Dalek Ironside review, I’ll try to keep spoilers to a minimum. But there may still be tiny ones lying about, so read at your own risk.

There were a couple different Doctor Who exclusives at this year’s San Diego Comic Con, but the only one I was interested in was the new orange Dalek and 11th Doctor. Not only was this going to be my first Doctor figure, but it was also the first toy release of the brand new Dalek design. 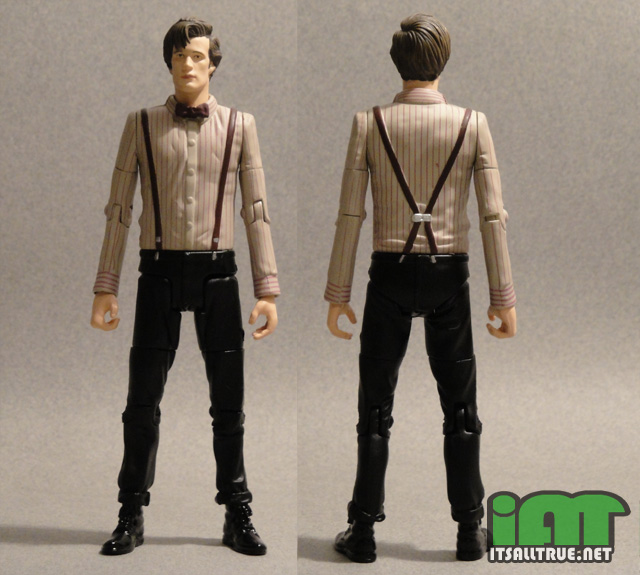 This version of the 11th Doctor is pretty straight forward. It’s just him in his red shirt and bow tie, but without his tweed jacket. I don’t doubt that we’ll see this same figure repainted to be in his blue shirt and bow tie in the future. Although I don’t mind this look, I prefer him in his tweed. The jacket makes him more distinct, while the red shirt with bow tie and suspenders make me think barbershop quartet. 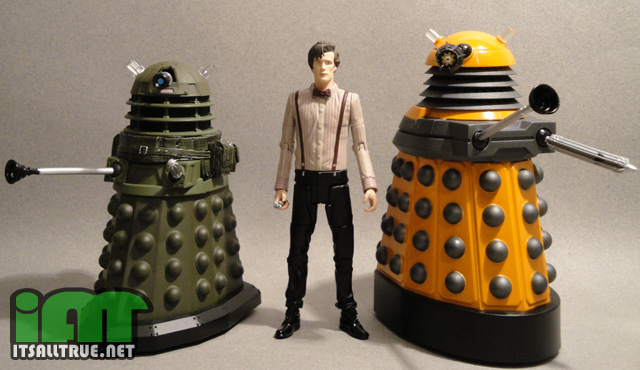 The sculpt of the face is nicely done. Not every angle looks exactly like Matt Smith, but its close enough not to complain. I do wish his face had more emotion to it though. The 11th Doctor is a little goofy, and I would have liked that to show on the figure with a smile or a wry look. As is, he’s just staring blankly. There are some nice, but small, details on the rest of the figure. The shirt has sculpted wrinkles and buttons, and even the suspenders are raised. The pants have similar touches with the sculpted belt, and folds rippling down to the cuffs of each pant leg which are accurately rolled up. There are also some nice elements on his shoes, with the laces and even the seams of the leather visibly sculpted. 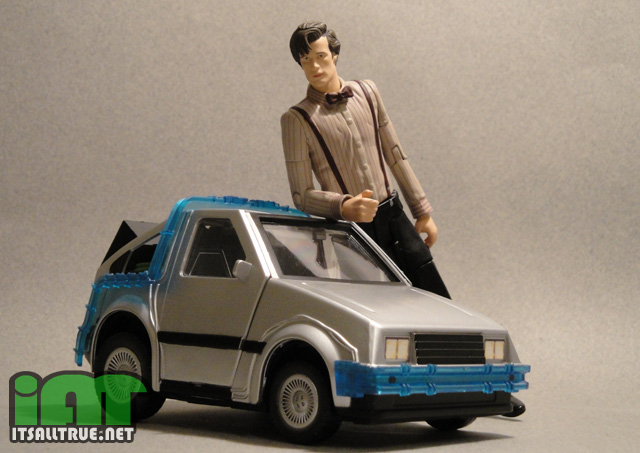 The paint on the figure is nicely done. He actually has two different color skin tones, a dark and a light, on his head. They are so slightly different that I didn’t even notice until I had him under the bright lights for pictures. His shirt is the kind of area where there might be some big trouble. Mine turned out pretty good, but those tiny pinstripe lines did end up blurring slightly on his back, and there was even a small red blotch just above his suspenders. Not perfect, but very acceptable and hardly noticable. I was also impressed with his glossy shoes. I know it’s a minor detail, but it really helps them to stand out from the black of his slacks. 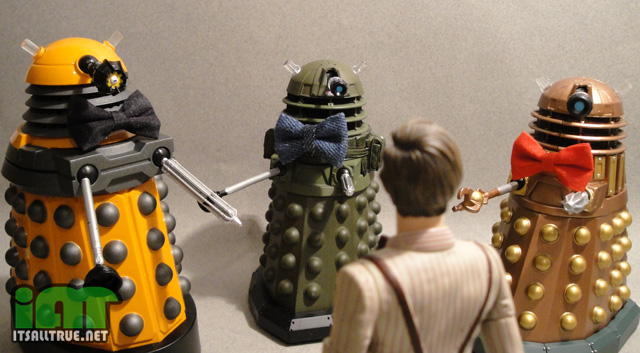 The articulation is standard for a Doctor Who figure. He has a swivel neck, shoulders, bicep, wrists, waist, and thighs. His elbows and knees are hinge joints, and his hips are swivel/hinges. Although he’s not hyper-articulated like a lot of today’s figures, he’s still got more than the basic five and there’s definitely enough to get some nice poses. One thing I do wish is that Character Options would change the shoulders from a swivel to a ball joint. That would allow for so much more emotion to be displayed, plus it wouldn’t cost more if they’d drop the useless swivel/hinge hip joints. We don’t really need our Doctor doing the splits do we? Continue to Page Two….