It’s almost impossible to think about Doctor Who and not have your mind wander to his greatest adversaries, the Daleks. So it’s no surprise that Underground Toys has already made a legion of these mutant menaces in every imaginable variation, even a WWII soldier. Wait, what?

For those who haven’t seen the newest season of Doctor Who, there may be some spoilers here. I’ll try to keep them to a minimum, but proceed at your own peril.

As David Tennant exited the series, I had serious doubts about the upcoming 11th Doctor played by Matt Smith and the new direction Doctor Who was going to take under Steven Moffat. I was completely wrong. Not only is Series 5 a great jumping on point for new fans, but it harkens back to older series with its various background eye candy and references. Then, there’s Matt Smith. Not only did the poor guy have to live up to David Tennant’s extremely successful performance, but he had to win those fans over to his interpretation/version of the Doctor. With his infamous bow tie, slightly scattered thought process, and penchant for a classic style; the 11th Doctor feels more like the old man that truly he is, trapped in a younger man’s body. This is also represented in his adventures. Like the First Doctor, you’re more likely to see the Eleventh meeting up with historical figures from Earth’s past than exploring the various edges of the galaxy. (Although you do see that too: Space Florida anyone?) 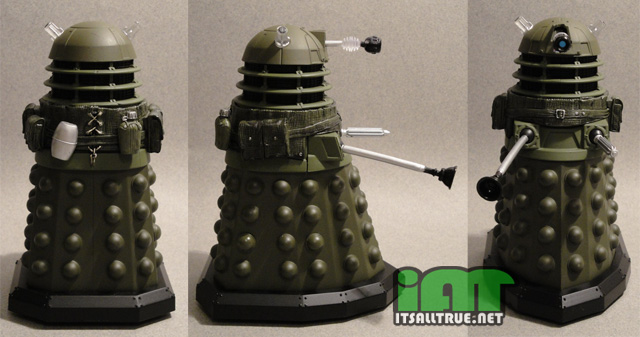 It was in one of these historical gallivants that the Doctor, and his new companion Amy Pond, were called upon by Winston Churchill. They arrive to discover this strange new kind of Dalek working for the British Government. Designed by the genius of Professor Bracewell, these new Daleks are dubbed Ironsides and were built as the perfect military weapon against the Nazi threat. But the Doctor has his doubts. 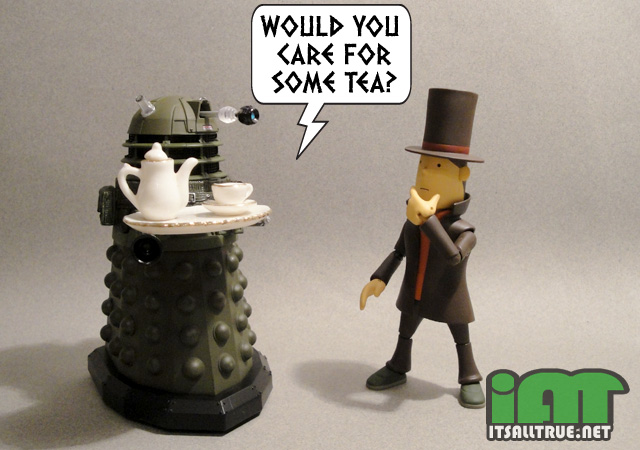 I’ve been a casual fan of Doctor Who ever since its return in 2005. The stories have been fun and interesting, but at the end of the day it was just a show I watched when I could and if I missed it, oh well. That changed with the newest season. With its fast paced action, quirky Doctor, and the best companions ever; I’ve become a little obsessed. I know this because the new series has actually inspired/brainwashed me into buying some of the toys. My first purchase being the Ironside Dalek. You might think this is an odd choice since I don’t even own a Doctor figure, but I’m waiting on that box set of all eleven. Might as well get them all in one fell swoop. 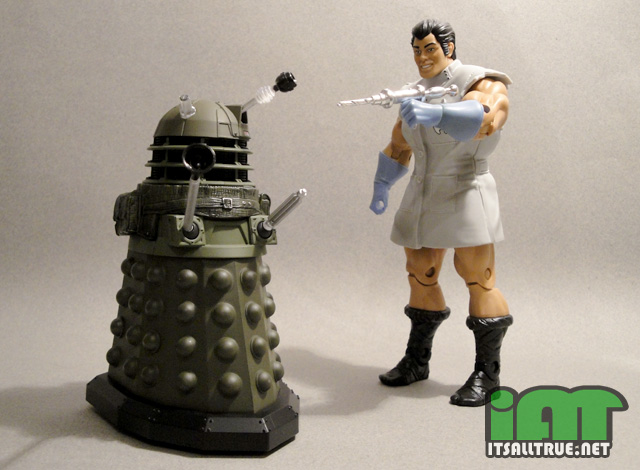 Underground Toys produces the Who figures at a five inch scale. Although the figures themselves may not be as overly articulated as toy collectors have become accustomed to, they are still great figures. I’ll talk about the articulation of the human figures more when my box set arrives. As for the Dalek articulation, he’s got more than I expected. His dome head is a swivel, and can turn a full 360. The eye stalk acts like a lever and ranges from 90 degrees to 45 degrees. This gives the Dalek a pretty good range of view for posing. Both the Dalek’s “arms” sit in ball joints inside the body. They have a decent range of movement and I was surprised how they can be articulated to suggest emotion or action. Underneath, the Dalek is supported by three wheels. The two on back are stable and just roll forward, but the one on front is on a swivel. This allows the figure to be easily rolled around on any flat surface. I was even able to shove him like a Hotwheels car on the floor and get him to go a couple feet before stopping. That’s pretty impressive for a large chunk of upright plastic, and we’re hoping to compete in the Dalek Grand Prix next season. 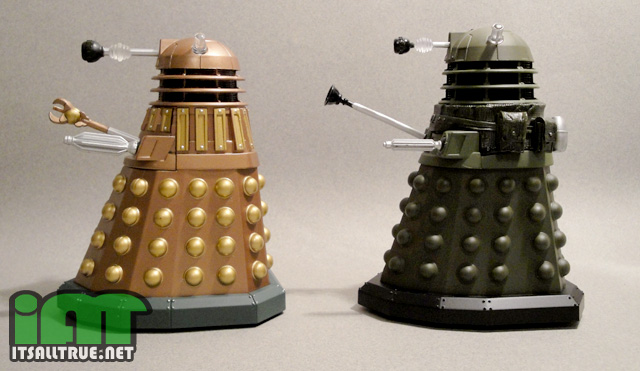 The Ironside’s sculpt is very similar to the older Assault Dalek that I picked up at the same time. The bodies are identical, with changes to the add-on pieces making up most of the difference. The eye stalk is smaller, but has a similar shape. The gun arm is also smaller, and its ridges are less defined as the older Dalek’s. Instead of the metal plates of the older Dalek, the Ironside sports a fashionable World War Two harness made from a slightly softer plastic. The harness is extremely detailed, with a sculpted fabric pattern and various pouches and canteens hanging around him. There’s even a spot on the back with synched string where they laced and tied up the harness. This is one of the parts of the figure I liked the most. Another difference between the two Daleks is the bumper piece around the bottom. The Ironside uses a slightly smaller bumper with a different cut to the angles. I was really impressed with how the bumper doesn’t quite touch the ground. It comes down far enough to hide the wheels and give the impression that the Dalek is floating. 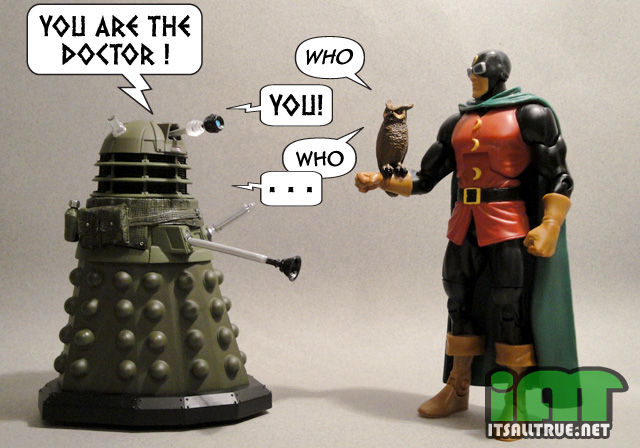 The paint on the Ironside is simplistic but detailed. Most of his body is molded in that dark military green, with his bumper molded in black. The lights on his head are molded clear, as is the eye stalk, although it’s painted with black and silver details and a striking blue iris. The most impressive paint apps come on his harness, with the small silver buttons and off-white string in the back painted with little slop. There is also a small Union Jack painted just below the Ironside’s eye stalk. Tiny additions like this really help to highlight this figures detail. 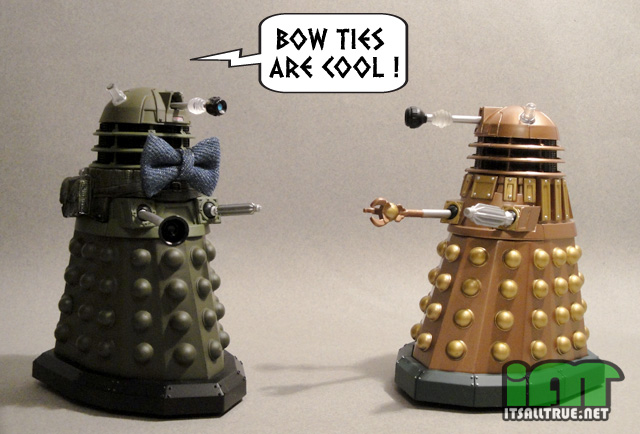 I’m incredibly happy with my first Doctor Who purchase, and as you can see, my army of Dalek’s has already begun to grow. Although simple in design, the Ironside has a great range of movement and detail, and is of course show accurate. Underground Toys is a British company, so their toys are imports and cost a bit more than your average DCUC. I picked up my Ironside for $20, and I wouldn’t really want to pay more than that since he’s not an exclusive or a rare figure. If you’re a Dalek fan, a Doctor Who fan, or just a mutant-robot-WW2-killing-machine fan, this Ironside Dalek is probably for you.