With the upcoming release of the new Trigun movie: Badlands Rumble, it’s no surprise that new figures are also in the works. What did surprise me, or should I say delight, is that these figures are being made by Revoltech. But how does this new Vash the Stampede stack up against previous versions?

Vash the Stampede: the Humanoid Typhoon, these are the names of a dangerous man. A man who destroyed an entire city and is now worth 60 Billion Double Dollars. A man who is stalked by bounty hunters and insurance adjusters alike. But Vash, with his motto of peace and love, is more interested in eating donuts and finding food than shooting his gun. This philosophy doesn’t keep him out of trouble though. This is why he’s followed around by two insurance agents, Milly and Meryl, who try and minimize the destruction. Suffice to say, hijinks ensue in this unique space western that still has a very serious, and sometimes depressing, side to it. 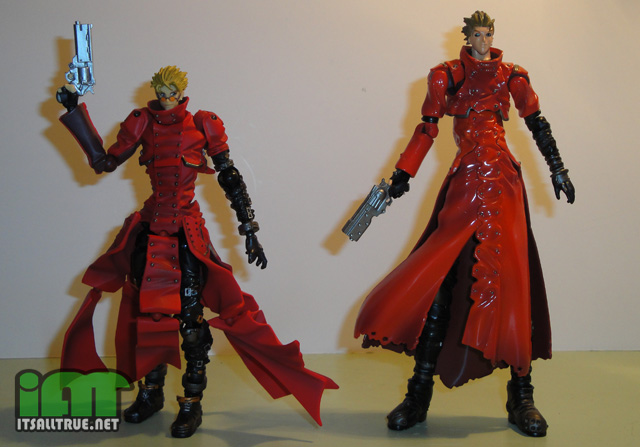 There have been a couple different attempts to produce Trigun figures over the years, some more successful than others. In 2000, McFarlane produced a figure of Vash in its Anime toy line. A year later, a company named Toy Tribe began producing a line under the banner of Planet Gunsmoke. This was a nice line of figures at the time, and one of the first few toy companies to use the direct market exclusively back then. They were able to produce five characters plus variants: Vash and Dark Vash both with and without glasses, Wolfwood, Bloody Wolfwood, Monev the Gale, Dead Monev the Gale, Meryl Stryfe, Gazelle the Peacemaker, and Bloody Gazelle variant. In 2006, Jazwares would try their hand at the Trigun license. The line consisted of Vash, Shirtless Vash, Wolfwood, and Knives. These figures were released in very limited quantity though. One reason speculated was based on the poor quality of the figures themselves, whether this is true or not remains to be known. 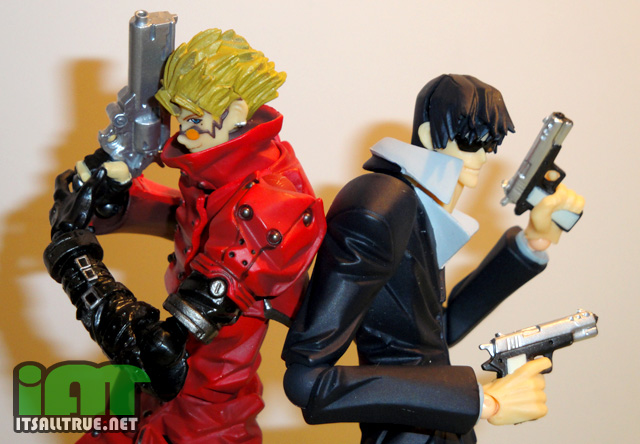 This brings us up to today, and Revoltech steps up to the plate. I don’t want to spoil anything for you, but I can already tell you that they blow the previous companies out of the water. With their first release we get the expected Vash and ever present Wolfwood figures. Tune in next week for Wolfwood’s review, where you might find out that I’m not as happy with him as one of the previous company’s figures. 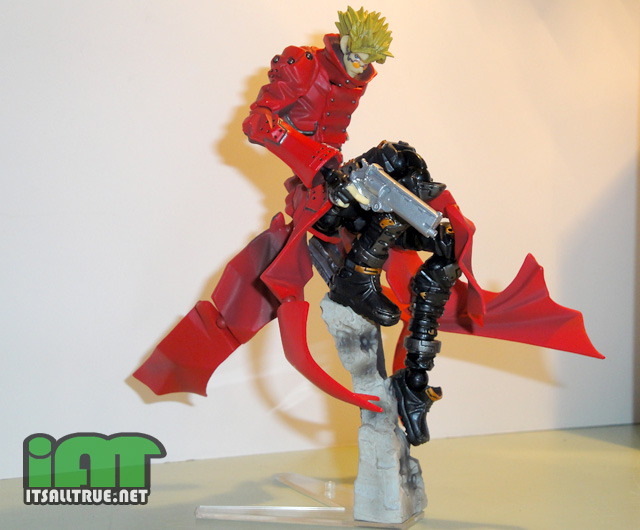 I’ll say it right here, Vash’s look is damn near perfect. The sculptor, Yamaguchi Katsuhisa, really did a fantastic job on this figure. His classic red coat is covered in sculpted details like folds, wrinkles, buttons, piping, and plates of armor. Likewise, his legs and uncovered arm are packed with wrapping and armor pieces being held together with bolts and buckles. Even the bottoms of his shoes have treads on them. Though all the technical details are superb, Katsuhisa took it even farther by perfectly portraying Vash’s trademark spiky hair, zigzag sunglasses, and knowing smirk. 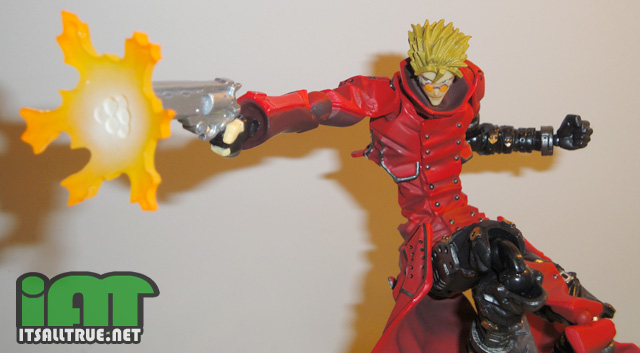 Even with this top notch sculpt, it’s the paint job that takes this figure’s look to perfection. Vash’s coat is molded red, yet there are many areas both on the surface and underneath the flaps that have been painted in dark browns and light blacks. This gives the light handed impression of shadow and possibly grime. Vash’s legs and arms are covered with small shiny bass colored plates and the dull worn grey of metal. The lenses of his glasses have been painted with a glossy coating, and they even remembered to put the small speck of a birthmark under his left eye. Speaking of eyes, although small, they are incredibly expressive on both faces that you can see them. Continue to Page Two….