Today’s nominee comes to us via our forums from Tekwych. We’d gotten into the habit the last few weeks of nominating entire lines and wanted to get to some characters that are missing from current lines. Tek responded with a nod to one of DC Comics coolest teams: The Freedom Fighters!

Separately, the original Freedom Fighters were Quality Comics characters that were acquired by DC Comics in the 1950s. In 1973, Len Wein and Dick Dillin placed the characters on Earth-X, a world where the Nazis won World II and the remaining heroes – Uncle Sam, Phantom Lady, Human Bomb, Black Condor, the Ray, & Doll Man – gathered together as the last beacon of justice. The JLA & JSA would end up on Earth X via a teleporter accident and helped the Freedom Fighters to free that world from tyranny. A few years later, the Freedom Fighters would relocate to Earth-One, add Firebrand I to their ranks, and receive their own series. It ran about 15 issues before being culled in the DC Implosion of 1978. 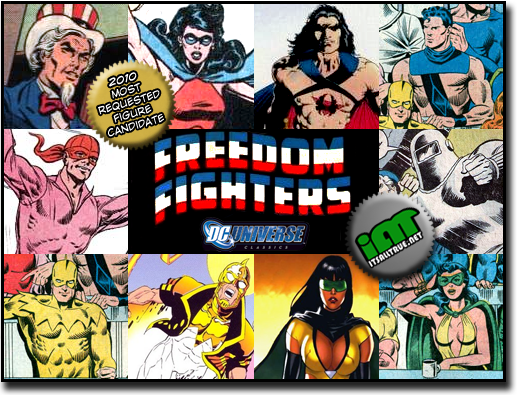 The team went unused until the early 80s when Roy Thomas retconned the heroes into his All-Star Squadron. In that title, they were now Earth-Two heroes who had travelled to Earth-X instead of hailing from their originally. Also, an earlier group of Freedom Fighters was added to the history. This group consisted of lesser known Quality characters: the Invisible Hood, Magno, Miss America, Neon the Unknown, Red Torpedo, and Red Bee, as well as the Justice Society member Hourman. Originally, Uncle Sam was the only survivor of the team’s first mission – trying to prevent the attack on Pearl Harbor. Later comics, have either resurrected most of the characters or clarified how they actually survived. All except Magno. Poor guy.

After that, the characters go largely unused again. Earth-X is smashed into the DCU during Crisis. Uncle Sam is briefly turned into the Patriot in the pages of Spectre, a new Phantom Lady debuted, a new Black Condor and a new Ray (son of the original) receive their own titles in the early 90s. The team was resurrected in 2001 with Uncle Sam gathering the Human Bomb, Phantom Lady II, Black Condor II, the Ray II, along with Iron Munro and Damage in a new group. With the exception of Munro, this incarnation stayed together until they had the misfortune of falling prey to Geoff Johns. Johns used the modern version of the team as cannon fodder to show how menacing the new Secret Society was. Sinestro killed Condor II, Deathstroke impaled Phantom Lady II, Bizarro beat the Human Bomb to death, Damage was horribly disfigured, and the Ray was taken as part of Alex Luthor’s scheme.

Grant Morrison’s designs on a modern version of the team would be handed off to Jimmy Palmiotti and Justin Gray. These guys are some favorite writers of mine personally (we’re never going to get a DC Classics Monolith and I’ve accepted that), but I haven’t followed the happenings of this modern team as closely I would like. Their book’s team consisted of Uncle Sam as well as a litany of new new legacy heroes (II’s, III’s, and a IV!) and it’s received good reviews. Their adventures are available in a couple of trade paperbacks and a new ongoing series is slated for this Fall!

If I’ve counted right, and if not I’m sure a brilliant reader can swoop in and correct me, there have been about 40 characters that have had membership on at least one of the Freedom Fighters teams, but the stalwarts have always been the originals and their legacies: Uncle Sam, Phantom Lady, Black Condor, Doll Man, the Human Bomb, and the Ray.

For DC Classics, I’m not sure what I’d like to see Mattel do. In some cases, I prefer the originals (like Human Bomb), but in others I love their legacies much more (like the Ray & Black Condor). What Freedom Fighters characters would you like to see make it in the line? Let us know below…