I was hoping to get to this guy sooner, but the weather didn’t want to agree. The way I see it, it’s more fun to review a G.I. Joe in its natural environment. No, not the toy shelf. Joes were made for play. Figures, accessories, vehicles – all were made to be played with outside. At least, they were when I was a kid. So, with that idea in mind, I waited for the snow… and it finally came. 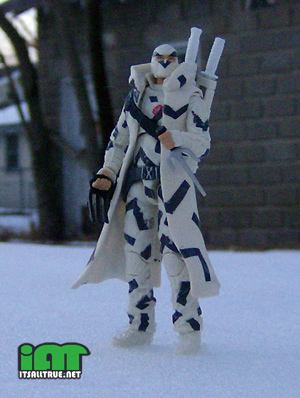 Storm Shadow has always been one of my favorite characters. As a kid, I never really read the comics and the character didn’t really catch my attention in the cartoon either. Storm Shadow was one of those characters I loved based solely on how the toy looked. Being an older collector, that’s a pretty rare thing to happen at this age. But as a kid, if a toy looked cool or badass, it could easily become one of my favorites. It also helped that he was a super-ninja bad guy that wore white. That intrigued my young mind. Like most kids, I was taught that bad guys always wear black.

Skip ahead a few years. I’m a little older, pre-teenish, and I see a new Storm Shadow in the stores. But this time he’s different. Instead of wearing stark white, his costume design was changed with the entire figure flecked in gray strips. It was awesome at first sight. After learning a little more about this new design, I was surprised to learn that my kick-butt ninja had joined G.I. Joe. Bad guys legitimately turning good is always a weak spot for me. I don’t know why, but I love that concept. So Storm Shadow, for the second time in my life, became my favorite Joe. 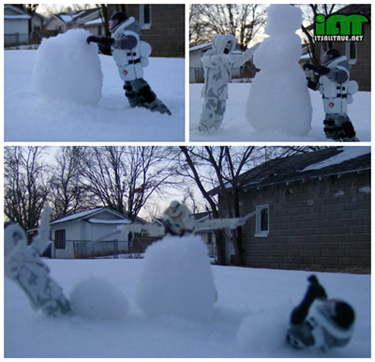 Last August, when IAT packed up and attended JoeCon, we were present for the debut of the Pursuit of Cobra line, which would give us an updated version of that gray-striped Storm Shadow. This version is still technically working for Cobra, but that doesn’t make the homage any less fantastic.

Storm Shadow has the basic articulation we’ve all come to love on the movie Joe figures. The only thing I was annoyed about was the stiffness in the neck’s ball-joint. I’m not sure if it’s just mine, or everyone’s, but his ability to look up and down is very limited. This is my first Storm Shadow from the movie line, so I don’t know how original the body sculpt is, but I do know that his coat is a repaint of the Paris Pursuit Snake Eyes. It looks good on him and it’s one of the main reasons the figure is so badass.

Since the figure is mostly molded in white, there are only a few areas of paint to watch out for. The gray stripes on the body are done well, with only minor fading or smudging. What you really have to watch out for is the gray V stripe that goes across the front of his mask. Most of the ones I’ve seen were misprinted, causing the paint to run over onto the flesh colored part of his face. I was lucky enough to find one that only printed on the mask, but it is slightly crooked. So it’s still not as perfect as I’d like it to be. Noisy wants one of these for himself, but he’s yet to find one where the grey paint is bleeding on to the face.

Stormy comes with plenty of accessories. First, there are two swords, a long one and short one, and a sheath to hold them. The sheath fits into a hole on his back. A ninja claw thing, a sai, and a bazooka that can shoot a missile round out the group. There’s a rope connecting the missile to the bazooka creating a neat little zip line contraption. Like most of the movie figures, Storm Shadow comes with more weapons than he has places for. I don’t mind all the accessories, but I would like an extra holster or two for storage.

At the end of the day, Stormy’s a terrific figure. I love that they fit the retro design into the modern look. That touch of nostalgia on a new toy really makes me happy. I also love that they gave him a badass coat instead of that clunky parka (sorry Snake Eyes). It makes him look streamlined, yet dangerous. Perfect for fighting or hiding out in the arctic. This is definitely one figure my collection wouldn’t be complete without. And until they release the rest of the arctic assault, who else is going to command all the Ice Vipers?