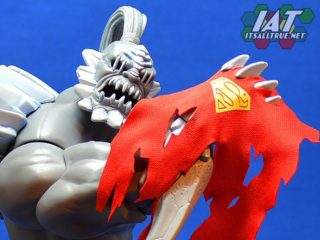 Mattel’s reveal of their New 52 Doomsday Collect & Connect last weekend got me thinking about how happy I was that Mattycollector managed to release a classic Doomsday before the line ended. If not for that, then that unnecessarily-tusked Doomsday would have to suffice. Don’t get me wrong. I’m ecstatic that DC Classics is continuing on as the 6″ Multiverse live. I’m hopeful that the absolute glut of TV-based Multiverse Arrow figures don’t make upcoming comic versions hard to find. I loved picking up the MOTU Dark Knight Returns trio last week and look forward to grabbing many more as long as Mattel will still make a few truly Classic figures in there. We still don’t have a good classic Superman in light blue with a proper S-shield. Just sayin’.

But I digress. Doomsday. When I was thinking about this being the “Final Figure”, I realized that I was apparently holding off the inevitable – I never reviewed him. I opened him because his box took up too much space in the review pile, but he kinda just sat there after I popped him loose, never able to join his fellow figures. Oops. Since he’s no longer the “final figure”, I thought this would be a good time to get him wrapped up so I can review some of these newer figures that have been sent over.

As one would expect, Unleashed Doomsday shares some parts with Bound Doomsday who also borrowed from the Kilowog/Brimstone/Arkillo buck. In this case it’s mostly the clothes. They share the boots and the shorts and then the lower thighs, abs, shoulders, and biceps. Everything else is all new. I remember being skeptical that Unleashed would require that much more tooling than Bound, and they probably could’ve shared a little more, but this way is better. The higher amount of unique sculpted parts has created a much better figure.

To find the new bits, basically look for the skeleton extensions. I’m still not sure how they fit in the Calatonian burial garb, but they’re what required the new tooling: the upper calves, the forearms, fists, the upper torso and the add-on bones, and then the head (and the ponytail!). Each of these new parts is really well done and give the figure, one of the longest and most anticipated, his due. Particularly nice on this sculpt is the two-part head. The seam could be disguised just a tiny bit better, but the two pieces allow Doomsday to have his deep-recessed, and bone-encased eyes. That’s great.

The figure is mostly molded in the appropriate colors, but the white bones have a blue wash to bring out the details. Normally, I’m against blue washes on black & white plastics (see my Symbiote Spider-Man reviews), but it works here. Articulation is pretty standard for this buck: ball-joints at the neck, shoulders, & hips; swivels at the biceps, wrists, waist, thighs, & boots; hinges at the elbows, knees, & rocker ankles; and the ab crunch. Everything works well and there are some good poses to be had even for such a bulky figure.

I suppose it’s worth mentioning that this Doomsday is a little too big in the same way that the old DC Superheroes one was too small, but some artists have drawn him this big and it’s definitely better to err on the larger side. It’s just not an impressive display when Superman is locked in mortal combat with a tiny Doomsday.

There is one accessory and it’s cool enough that I’ve actually not taken it away from him since getting him out of the package: a tattered Superman cape. It is soft goods and stretched over the bone extensions. It will come off easily, but like I said, it’s cool where it is. Extra points for having the yellow symbol stamped on it.

Overall, this was a great figure to get before the line wound down. I’m still not at peace with the line being “over” with so much left undone. Multiverse going 6” and dropping a few comic figures on us is a good thing and I hope we get more out of it, but for now Doomsday here is probably the last great addition to the Classics line. I’m always going to be hopeful for more, particularly that classic blue Supes with an appropriate symbol, but I’m happy with where we’re at. We got both Doomsdays. We’re getting an Earth-23 Supes. And we’re getting some awesome DKR figures. Future’s still a little bright; even with this being the “final” figure.