Greedo is an all-new sculpt, but I’m sure we’ll be seeing plenty of these pieces elsewhere in the line in the coming months. A better Star Wars fan than I could shout out where his jumpsuit and vest could come in handy (and please do in the comments if you can, I’m curious). Greedo himself just needed his unique head sculpt and hands. Those three pieces are done wonderfully too – the lever of detail on the noggin’ is probably what sells me overall, but the hands are nice too. Hasbro made sure to nail these details down. 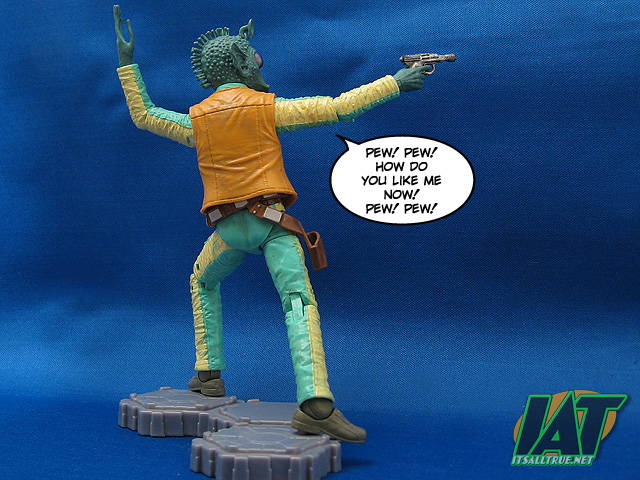 The other good thing about the body and any potential reuse is that the articulation is the star of the show here. The ball-jointed neck, shoulders, elbows, wrists, torso, hips, and inverted ankles combine with the thigh swivels and double-hinged knees to give Greedo some impressive movement. With his great alien look captured in the sculpt and all that articulation, I think I’ve played with him the most out of the seven I’ve opened. That’s ridiculous. It’s friggin’ Greedo. 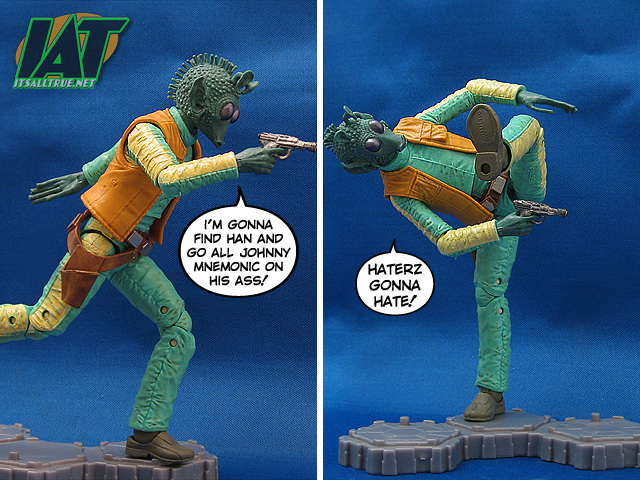 The paintwork had a few issues here there, notably the bluish silver paint on the eyes being a little crooked. It’s not a big deal, but it annoys me a lot in that close-up pic on page one and I bet you saw it too! Other than that, the figure is mostly cast in the appropriate colors, but some sharp paintwork can be found on the belt and the yellowish running stripe on the jumpsuit. It’s crisp where it needs to be and has a great dirty wash over the whole outfit.

Greedo included a removable belt and his “shoot first, fire second” laser. The gun fits great in the holster and looks sharp, but it also fits perfectly in his right hand. The vest is also removable if you’re so inclined. I do wish he came with a little more – a glass? Something? But it could just be withdrawl from Han Solo’s figure which included a bunch of fun stuff. 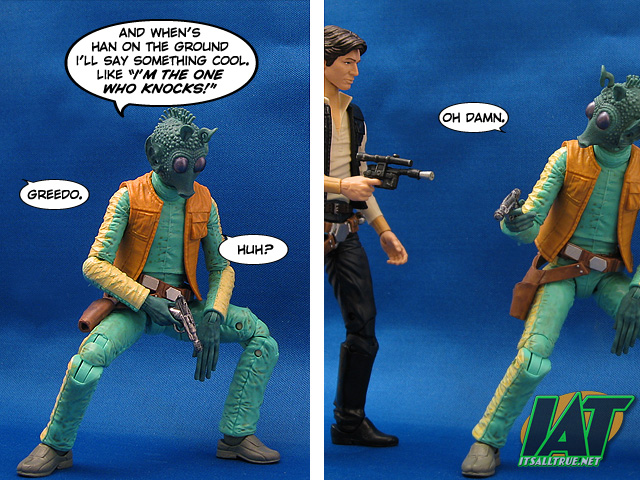 Overall, I know this is the figure where things are going to start getting me in trouble. Greedo was just too fun to pass up and if that keeps being the case… well, I don’t think I have enough room. Hasbro has done a great job kicking off Star Wars Black though. I’ve had some nitpicks, but the sculpts are sharp and some great paint apps and smart articulation really combine for an outstanding figure. I still want bicep swivels, but I’d be lying if I said Hasbro wasn’t on to something. I won’t be getting everything – the Wave Three Anakin is testament enough to that, but if the figures keep coming out this sharp, then yeah, I’ll be buying a few more than I expected. 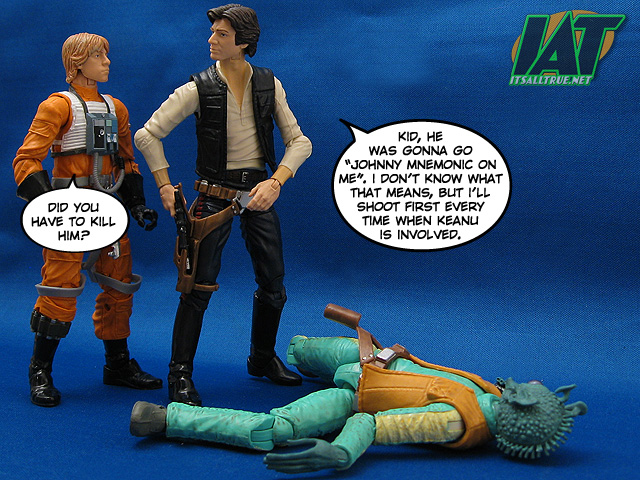