There weren’t many SDCC exclusives I had to have this year. Some of it was that the big guys really seemed to mail it in, but I’d also like to think I’m being a little more refined in my purchases. (My wife will assure you that it isn’t the latter). There was one SDCC piece that spoke to me though. It was a great mix of cleverness & nostalgia. Of course, like most of us, I can’t really get over to San Diego.

Luckily, this particular SDCC exclusive drops TODAY over at the SMC store (along with some other cool colorways) and to help promote the release the fine guys over at SMC were kind enough to send along a sample for me to review. So, let’s kick off with a big thank you to Spy Monkey Creations and then get to the meat of this review.

I’ve reviewed the basics of a Weaponeer of Monkaa a couple times, so I’ll just give a quick overview of the basics. WoM figures run between 3” & 4” tall when they arrive (but you’ll notice in the pics that I tend to like customizing them to be a bit taller) and feature about 30 pieces all held together by fantastic Glyos joints. The sculpts are solid overall with one key feature being the multi-purpose heads & hands that can double as extra pieces. Sometimes a fist may pop up and be smiling at you, but I find that to be part of the charm. It’s also just fun to look across the figures and see little homages to classic toys throughout the design. WoM is designed by toy lovers for toy lovers. They ooze “toyeticness” (I don’t know how far I’m getting away from a real word there).

The initial offerings last year won me over, but it was their previous figure, the DX Umbreus that knocked it out of the park. He featured more detailed paint apps and just looked fantastic. I ended up converting my original figures into various other folks (that’s one of the most fun things about the line) and that Umbreus is the baddest of bads on my WoM shelf. 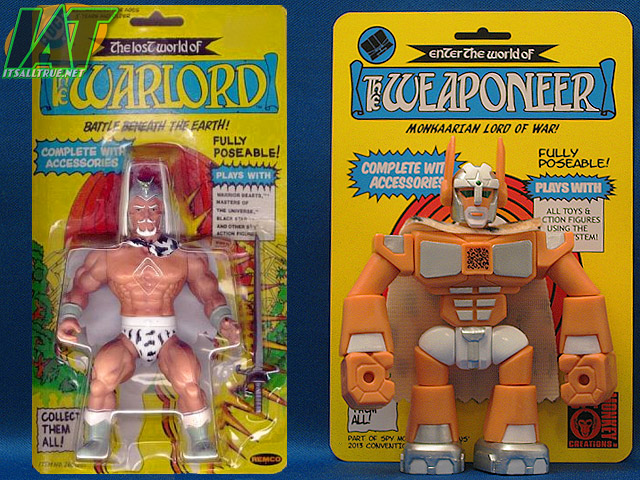 For SDCC, SMC went full-on with the paints on a new WOM figure, the Weaponeer, Monkaarian Lord of War. And if he looks familiar, that’s on purpose. One of my favorite DC Comics properties, Warlord, featured an Air Force pilot that ended up trapped inside the Earth, in the mystial land of Skartaris. He learns their ways, gets the girl, uses his “advanced” knowledge to be badass, you get the gist. Getting him in toy form has been more difficult. Mattel made him, but only as a JLU and not in Classics (Boo!*). DC Direct made a figure, but it was in the short-lived 2006 costume (toy companies are dumb like that). The best figure is still an old 1982 figure from Remco. It’s sorta a MOTU knock-off, but it’s still the real deal. I have one still in storage from the move, but couldn’t find it for this review despite serious digging.

* – Mattel absolutely needed to make a DCUC compatible Warlord first, but I would’ve died and gone to heaven had they also done one in MOTUC style. 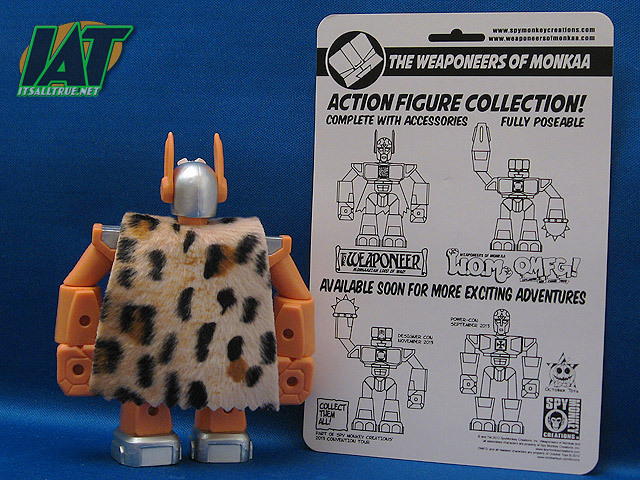 Anyway, that ol’ Remco Warlord is important because if you look at that comparison shot between The Weaponeer’s cardart and the old Remco packaging, you might notice a similarity. And that’s the thing that sealed this figure being awesome for me. And that’s just the packaging!

The figure itself is well done too. What really helps on these painted DX figures is that the initial elements sculpted on the basic buck and how the paint is used in conjunction with them. On Weaponeer, they blend in as armor for the most part, but I’m also spying a possible MOTU homage for Powercon on the back and if you look at the figure, you might get a good idea just how they’ll paint that up. I just wonder if the design was always there for that if the SMC guys just spot a good opportunity when they see it. Continue to Page 2…